Admin boundaries are available in https://www.humanitarianresponse.info/en/operations/federated-states-micronesia/dataset/micronesia-federated-states-admin-level-1-boundaries as a file geodatabase (*.gdb) but I currently don't have Esri software to read them.

How can I convert it to KML or SHP format?

I get the following...what projection should I use to fix this? 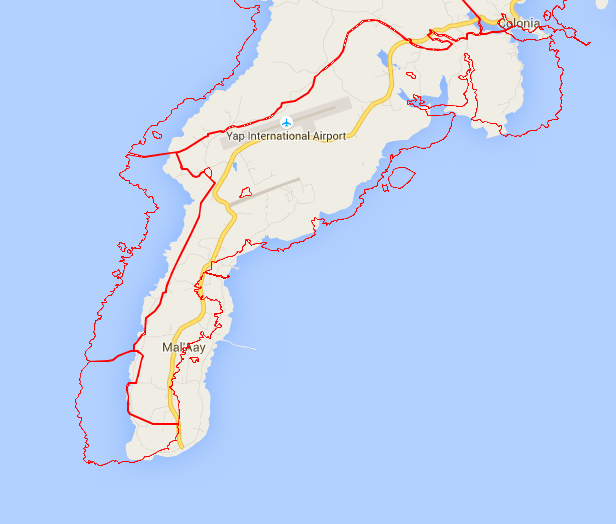 You can also use GDAL/OGR directly (which is what QGIS uses behind the scenes). It requires a special driver, but if you get it via OSGEO4W, that is included. Command line would look something like:

FME by Safe Software also does this, rather easily -- you could use the trial if it's a short-term solution you're looking for. You would read from ESRI fgdb and write into KML, and can add whatever you need in-between (re-projection, KML stylings, etc).

In answer to the original request

Just in case you can't access QGIS, I've created three separate shapefiles and put them on dropbox. The projection of these shapefiles is EPSG:4326

To assist with the follow-up question/issues

I used ogrinfo on the original file and it tells me the projection is EPSG:4326, I think, for example:

Looking at your backdrop, I can see it has come from Google Maps. So you will probably want to convert the shapefiles to EPSG:3857 - WGS84 / Pseudo Mercator, or just save the file geodatabase to a shapefile in that CRS.

It is possible though that the original data is not in EPSG:4326 (WGS 84), it might be worth looking at projections using earlier geodetic systems.

The YAP STATE CODE tells us for instance:

The Yap Islands coordinate system is hereby defined as a modified azimuthal equal distance projection in which the geodetic origin and the geodetic distance and the grid azimuth coincide at the point of origin and the geodetic distance and the grid distance are the same between the point of origin and any other point of the projection. This projection is based on the Clark Spheroid of 1866 and the 1965 Guam Datum. The point or origin of the system is station "YAP SECOR AMS 1965", having assigned to it the coordinates NORTH 60,000.00 meters, and EAST 40,000.00 meters. The geodetic position of "YAP SECOR" is 9 degrees 32 minutes 48.15 seconds NORTH latitude and 138 degrees 10 minutes 7.48 seconds EAST longitude. The basis of this coordinate system shall be the survey network established by the Army Map Service 1965 and extended by the U.S. Geological Survey in 1970.

Not the answer you're looking for? Browse other questions tagged shapefile kml convert file-geodatabase natural-disaster or ask your own question.