See screenshot, from geojson.io, with a geojson file loaded: 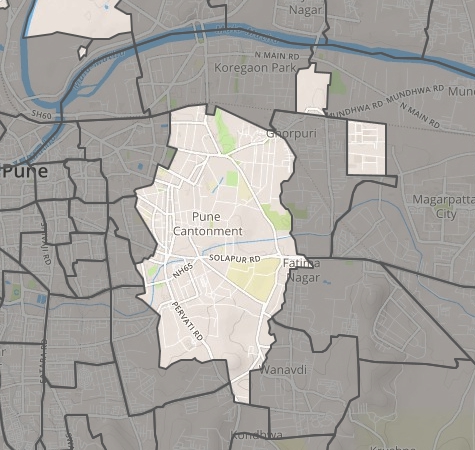 So how do we make a polygon out of the blank area? Looking for a way which doesn't involve manually copying selected sequences of co-ordinates from each enclosing polygon's edge. But if we can automate that, awesome!

Obviously the solution would involve specifying a bounding box limit, so we don't polygon the planet.

Some kind of proximity detection could be a way to go : enlist lines (ie, pair of sequential co-ordinates) which don't have any close-by counterparts in the other polygons loaded. Just an idea.

Guess I'm wishing for an "invert selection" like feature ;)

One approach would be to create another layer with a polygon that roughly covers the hole and then use a geoprocessing operation, such as difference or clip to remove the overlap and leave just the jigsaw piece you want. The extent of the rough-cut polygon would limit the operation to the region of interest.

This might be an approach in qgis, I don't know what program you are using.

Use turf.js for this, the functions union and erase in particular.

So not completely automated but my answer at for the following questions solves it quickly: Connecting polygon accidentally deleted - filling in the gap

Not the answer you're looking for? Browse other questions tagged polygon leaflet geojson kml or ask your own question.

1
polygon to raster - not all polygons rasterized
16
Area in KM from Polygon of coordinates
6
Create raster with grid cells values based on area covered by polygons
3
Catchment boundary polygon from catchment area raster
1
Calculating relative share of area covered by water/percentage of polygon area that overlaps in ArcGIS for Desktop?
2
Make square polygon from one point and area
0
Calculating polygon area within polygons in QGIS?