How to fix the error between two coordinate systems? 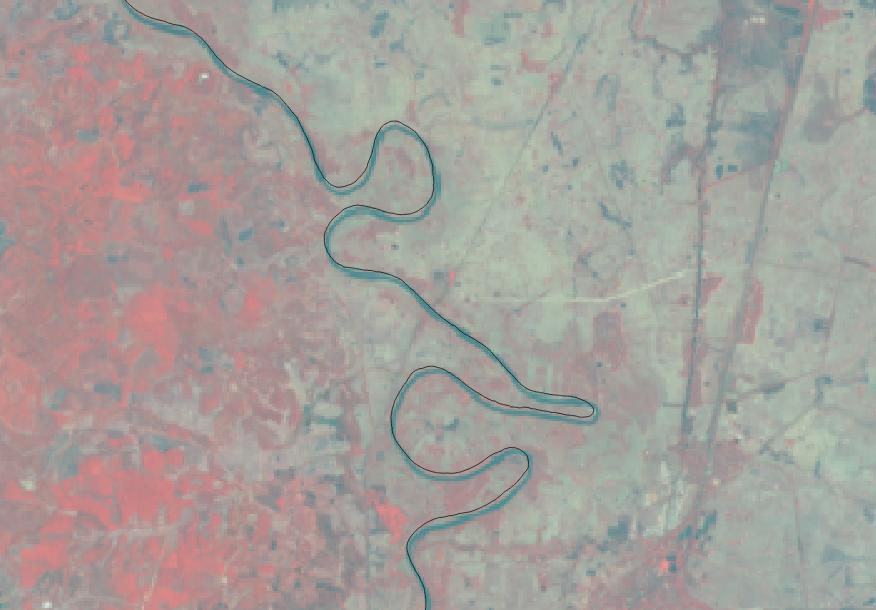 How do you think the shift of line is due to morphological change of river? Or it is due to deviation between two coordinate systems? Please point out !!

A good way to figure this sort of thing out is to manipulate the two layers interactively. Translate and rotate one to make it coincide as well as possible with the other. If you can succeed in this, then (a) the problem may simply be that an incorrect datum (or coordinate system) has been assigned to one (or both) layers and (b) regardless, you will have figured out a way to make the layers match. Another possibility, for figures that extend across only a small part of another layer, is that the apparent translation and rotation merely reflects a local inaccuracy in either (or both) layers. (This is commonplace in aerial photos that have not been orthorectified, for instance, but it occurs to some extent in almost any data product.) Estimate its magnitude and compare that to the worse of the declared accuracies in the metadata. When the magnitude is less than about twice the worst tolerance, chalk the difference up to inherent inaccuracy rather than some systematic problem.

When only a translation is needed, it is less than 100 meters or so along both axes, and the region is in North America, it's often due to confusing NAD27 with NAD83. For confirmation, you can look up or compute the NAD27 - NAD83 shift for this region and check whether it is approximately the same vector as the visually estimated shift.

In this particular example, shifting the thin black linear depiction of the river down 6 pixels and right 3 pixels makes it coincide very well with the thicker blue depiction, as shown by the yellow pixels in the figure (which, for visibility, are a thickened version of the translated thin black line). That small, simple change of coordinate origin suggests a datum shift. It certainly does not reflect a change in the river's actual position: rivers don't translate themselves in uniform motions like this.

At this point the deviations between the two depictions of the same feature appear somewhat randomly to alternate slightly around both sides of the river: that is an indication of microlocal imprecision or inaccuracy in one layer relative to the other. Sometimes it is advantageous to retain the layer whose metadata indicate higher accuracy. 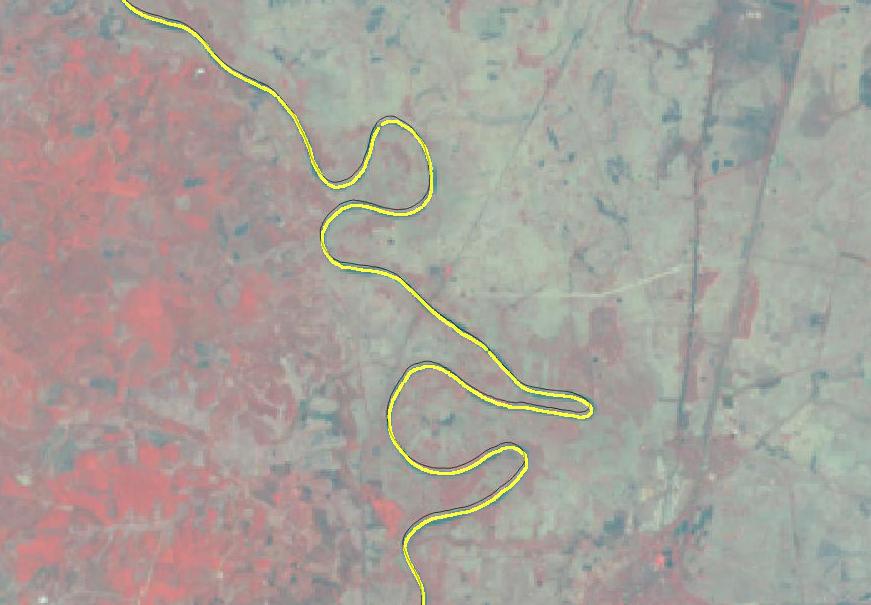 Looks to me like the base layer is a Raster image, and the rivers layer is a vector file.

I would also assume that the difference is due to scale of mapping/capture and not acutally the reference system or changes in the river. it would basically be the same as assuming a house outline on 1-50k mapping is the actual house outline on the 1-500 scale plan.

Not really the answer you are looking for.

I am also assuming you have enabled on the fly reporjections, but this will make no difference.