I would like to create a polygon layer using this information. After every three ranges and ten columns there are 1.0m and 1.30m wide allies, respectively.

I tried using the 'pyshp' module in python following this answer to Creating square grid polygon shapefile with Python?, but it did not help much.

So I was wondering if there is any tool available that would allow me to create polygon layers more efficiently ?

Do you have any suggestions on what would be the best way to do in Python, ArcGIS for Desktop, or QGIS ?

Edit: Here is the raster image of the field. So I tried the layer copy-paste method but the attribute table had FID all over the place i.e. without any proper sequence. The only way to asign the plot id to each polygon is to highlight each polygon in attribute table and enter the id manually. As MappaGnosis suggested, I would like to give python scripting a try.

To be honest, a python script (if you are familiar with Python) would be the most efficient method of creating your polygons in your use-case. However, if you are not familiar with scripting, then there are a variety of tools that you should investigate in QGIS (e.g. Vector->Research Tools->Vector Grid). You will have to use a crazy combination of these to get your result (probably something along the lines of creating a vector along the mid lines of your allies and then successively overlaying other grids... but it gets nasty very quickly because of your allies and spaces).

So, if programming is out of the question and hours of experimenting with unfamiliar tools is not appealing, I suggest you think laterally (though this is still going to require a pretty hefty formula)! I assume you are familiar with Excel. You can set up a spreadsheet to mimic your research area. Each cell will have a comma separated value along the lines of this: 1-1,234156,654789 where the first value '1-1' is a plot id and the second pair of values are the x and y coordinates of the corner of the plot. Each plot will have four Excel cells and you will use a simple repeating formula to calculate the offsets. You then auto fill your spreadsheet, export to a CSV but use spaces as the delimiter between cells. Then use MSWord or similar to globally change spaces to carriage returns and add a header line "id,x,y". Now import this as a text delimited file into QGIS and it will give you an array of points. Next use the Points2One plugin to generate polygons based on your plot id.

I would set Excel up this way:
Enter the coordinates of your first corner with the id 1-1. Now you need a formula. Each subsequent point will be an offset from the first corner. Your plot spaces and allies are identified by testing the value of ROW() and COLUMN() using rules:

In this way you will build a (large) formula using a nested IF() statement. It will start with concatenating COLUMN() '_' ROW() as a string and add (through an IF() statement for X and another IF() statement for Y) the coordinates so that every cell will contain id,x,y. Then export and convert to polygons as described above.

Personally... I'd write a Python script, but if you know Excel, this will work.

After seeing the raster image of the field, I though of this process - I used Arcgis 10.2.1. (Note: Just realised that I have got the length and widths around the wrong way when compared to the image, but If I was to recreate the answer I would use the same process below but amend the lengths and widths)

The spacing of the lines included a buffer distance to incorporate for ally ways and spacing between plots. Eg a plot width of 3.8m would have .5m add to its width (.25m for each side of the line) giving a total of 4.3m.

The next step was buffering. I created a new field in my attribute table called buffer and entered the required buffer distance (If I needed a buffer/area of 1m, then I would half that distance and input that value eg .5m) 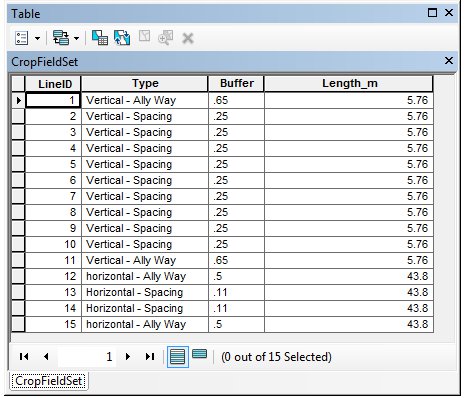 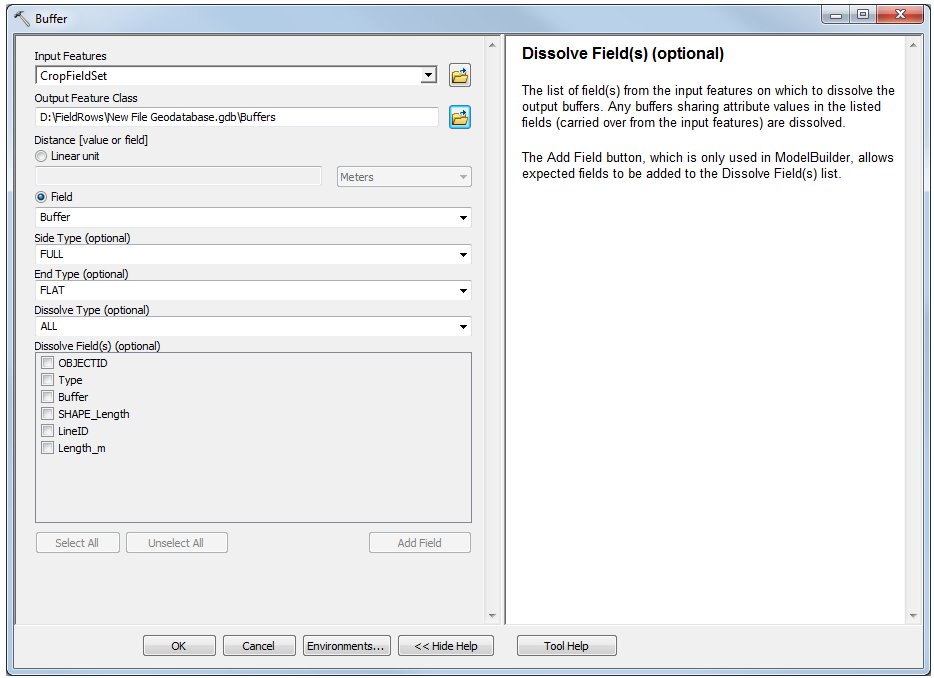 With the buffering done, I have a shapefile (see green polygon below) showing all the allay ways and spacing corridors around and between the plots. 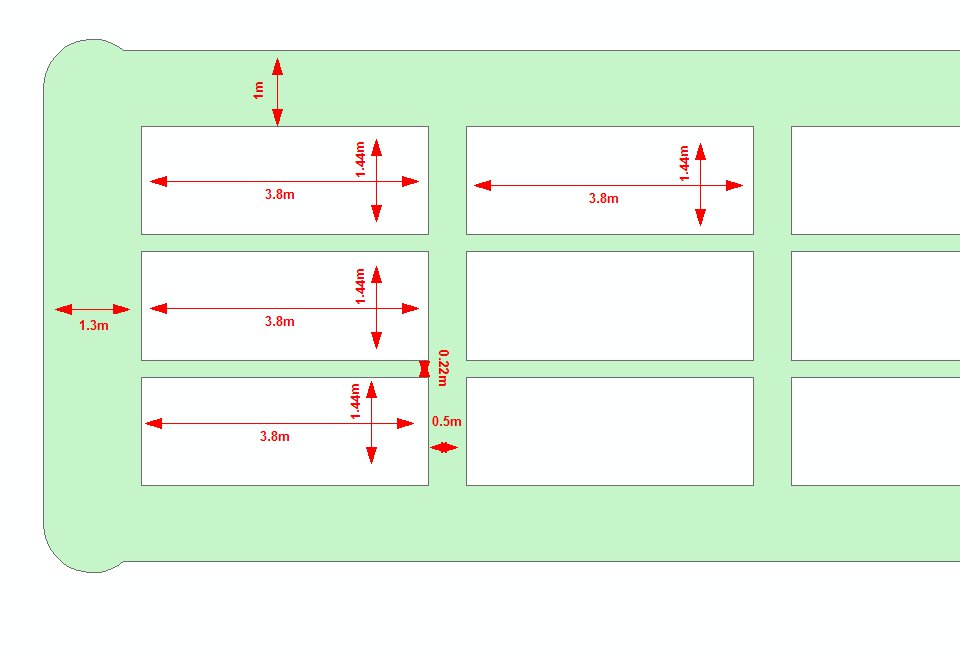 From there I used the Erase Tool to remove those areas of allay ways and spacing corridors from my new polygon. The end result is a polygon coverage of 10 x 3 plots.

If you wanted to do more plots, then you can join together multiple copies of the original line shape file and then go though the processing of buffering and erasing. Below shows multiple plots.

Not the answer you're looking for? Browse other questions tagged qgis arcgis-desktop polygon pyqgis pyshp or ask your own question.