I'm developing a reverse-geocoder for Canada. So far, given a lat/lng, I can find the nearest street (line segment), which includes line segment direction and address ranges for both sides of the street. I'm now trying to figure out the best way to programmatically approximate the nearest house number to the given lat/lng point.

Here's an example of a row containing the street data:

So, given a lat/lng coordinate that lies near the "the_geom" line segment, a person could tell visually which side of the street the point is on (left or right side), and how far along the segment it is -- thereby approximating a house number. For example, if the point lies on the right side, three-quarters down the street, I would use the fields r_hnumf (right side, first number) and r_hnuml (right side, last number)... The street address is probably close to:

What I'm looking for is a best practice in either computing/approximating this in PostGIS (which I'm new to), or in the application layer once the row is fetched.

The solution can be built entirely in PostGIS.

Given a point (house location, i've modeled it as a POINT) and a street segment (segment of street closest to this point, modeled as LINESTRING) you ask:

A possible solution is to determine the point on the street segment that is closest to the house and then determine if this point lies of the left or right of the house (the operator &< returns true if the first geometry argument overlaps or is to the left of the second geometry argument). &< actually works with bounding boxes but since we're working with points this should not matter.

Again this translates to how far along (a value between 0 and 1) on the street segment is the point on the street that is closest to the house. There's a built-in function for that, called st_line_locate_point: 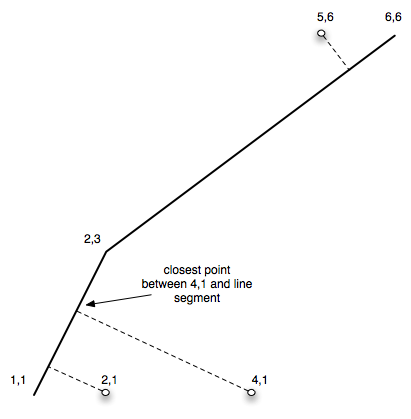 Take a look at http://www.postgis.org/documentation/manual-svn/ST_Line_Locate_Point.html

The example on the page is essentially what you are trying to do too I think.

11
Point in polygon algorithm for multiple polygons
5
Determining what side of line point is on using PostGIS?
0
Geocoding addresses based on own reference data
1
Estimating direction of travel of road line segment based on long/lat in PostGIS?
3
What is the correct way to get road segments from OSM based on a route?
4
Returning US Census geographies within range of coordinate using PostGIS and Tiger Decoder?
3
Point in multiple circles in PostGIS