How do I make equidistant circles covering the whole globe in QGIS?

What's the simplest way to make equidistant circles in PostGIS/QGIS? (my software versions are Postgres 9.3, PostGIS is 2.1, QGIS 2.10)

I tried this in PostGIS, but the circles that come near or across North pole get broken: 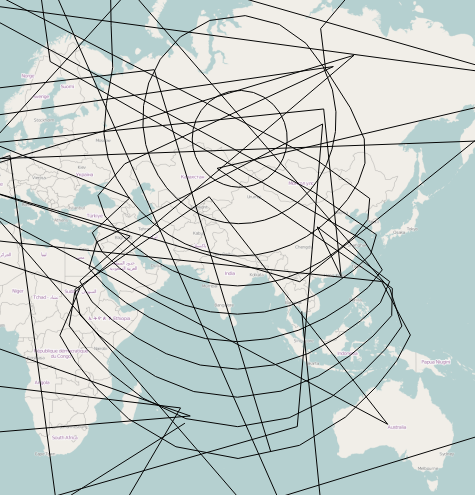 Another attempt was to use MultiRingBuffer plugin, but it makes circles only in the selected crs, and this makes ellipses: 1,000 km wide east-west and 2,000 km wide north-south.

The horizontal segment is about 2,700 km, the vertical is 4,000 km, but they appear near the same ring. This ellipse has north-south "radius" (in real ground distance) twice bigger than east-west, in other words, it's not just a projection issue.

[edit] SOLUTION (see details in the answer below)

The best CRS for making equidistant circles is a custom azimuthal equidistant projection based on the center point:

After creating the circle, you might need to densify the geometries. Displaying the circles in any other CRS might give you ellipses, but that's the difference between equidistant and non equidistant projections.

EPSG:3857 Web Mercator is definitely NOT an equidistant projection.

I think this is answered at here. To me, the best is using QGIS plugin called Multi Ring Buffer , details at here.

8
Creating multiple buffers using QGIS?
12
What is the right solution (and map projection) to compute distances between points located all over the World?

4
Reprojecting between NAD27 and WGS 84?
3
GRASS: Landsat 8 GeoTIFF import error
3
How to create Great Circle Mapper style range rings in QGIS?
4
Using azimuthal equidistant projection with buffers in QGIS?
2
How to make points with fixed distance and orientation from another points layer?
2
Antipodes map in QGIS