I'm working with multiple raw las tiles, and I've used Fusion to create an intensity image, but it shows the flight line overlap (see below). Any idea how can I smooth the image so that the overlap is blended into the rest of intensity values. Do I need to do any calibration or correction?

Can you please advise what tool I can use? 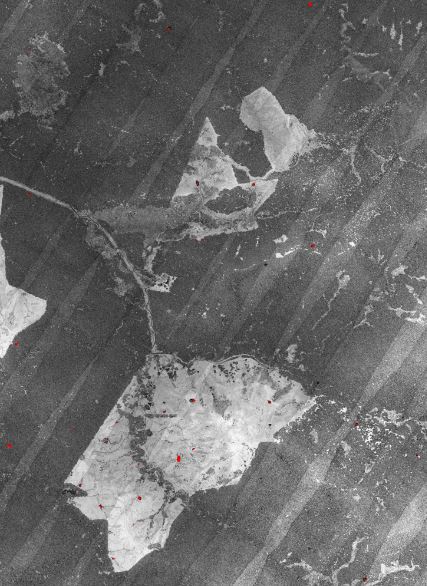 This effect could be a consequence of having different point densities within the flight line overlap regions. A possible solution would be to homogenize the LiDAR cloud.

With Fusion the command line to accomplish such task is ThinData:

ThinData works by randomly removing entire pulses from the LiDAR cloud1, according to settings of desired pulse density and cell size.

The general syntax of the command line is:

The algorithm will take into account the actual pulse density, the desired one and will remove pulses considering the cell size chosen in the command line. See in the manual, the section 'Technical Details' for detailed guidance about setting ThinData's arguments.

A hint would be to run the command line Catalog using the switch density:, to discover how much the density of points varies throughout the point cloud and inside flight line overlap areas. Then, run ThinData, and after that, the tools being used for generating the LiDAR intensity image.

It is important to mention that the intensity statistic is unstable and it requires calibration. See the following excerpt from Bater et al. (2011):

The intensity of a pulse return is the ratio of received to transmitted energy and is influenced by a variety of factors, including range to target, incidence angle, bidirectional reflectance distribution function, atmospheric transmittance and attenuation, transmitted power, and beam divergence. In their examination of interpolated intensity values, Boyd and Hill report visible differences between adjacent flight lines and attributed the differences to a lack of calibration between lines. The results presented here indicate that the intensity values were strongly and significantly different between flight lines.

We recently stubled across this issue as well and it is documented here: The merged LiDAR shows the trouble you report. The reason is that one flightline is much brighter than the other flightline so that the LiDAR points cannot simply be merged and have their intensity processed together. In the same flightline you also notice the negative effects of clouds on the consistency of your intensities.

I assume you still have the means to split the LiDAR back into its original flightlines? In the ideas case you also have trajectories so that you can normalize the intensities of LiDAR points with the distance from the plane.

What we ended up doing was simply to create two histograms and then apply a simple scale to one flightline to make the distributions in the two histogram match more closely (e.g. scale such that the peak of the two histograms have about the same value). Of course you need to do this on the LiDAR points before merging flightlines and rasterizing their intensities.

Not the answer you're looking for? Browse other questions tagged raster lidar image smoothing fusion or ask your own question.