I'm looking for the arcgis python equivalent of the VBA How to save a layer file with a relative path.

I'm using a script to change the paths in a collection of about 75 layer files before distributing to outside offices. The script works well, except that the new layer file paths are not relative, which means they usually are broken for the recipients as they rarely use the same drive letters etc. as we do, which pretty much defeats the purpose.

Paths follow the pattern X:\Layers\Category1\Group3, and X:\data\One.gdb, i.e. the layers and data are one the same drive but not in the same tree. 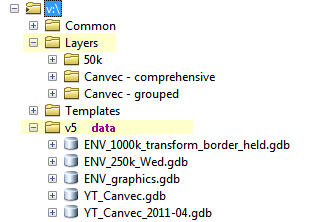 I found a solution: a) don't validate replaceDataSource (last parameter is False instead of True), and b) use SaveToLayerFile which has a "relative" parameter instead of saveACopy:

Unfortunately it doesn't work with group layer files, but at least it's progress!

For your info and to avoid confusion, as the apparent contradiction certainly confused me at first, in the Esri doc Paths explained it states unequivocally that relative paths are not supported in scripts while the reference page for Save to Layer file says just as clearly there is a RELATIVE keyword.

What this means in practice is that yes you must use full path notation in scripts, x:\data\foo.gdb and not ..\..\data\foo.gdb, and then saveToLayer strips the drive letter and leading directories on save. So the inputs must always be full paths, while the output may or may not be.

As far as I can tell SaveToLayerFile is the only arcpy command with a relative parameter. I presume there is an equivalent for saving mxd's but I haven't found it yet.

You can us arcpy like you're doing now, but save the layer files to the OS temp folder, and then use straight up Python to copy the saved file from temp location to wherever relative path it needs to go to.

Not the answer you're looking for? Browse other questions tagged python arcgis-10.0 file-path or ask your own question.

136
Accessing ArcObjects from Python?
11
Changing data source path involving feature dataset in *.lyr files using ArcPy?
7
How to save a layer file with a relative path