Two days ago I re-organised my schema structure - effectively moving a series of tables of the form vm[X]YYYYMM.[tablename] (X∈[admin, prop,add,reftab, plan]) to vmYYYYMM.[tablename]. There are no conflicting table names, so the reorganisation went off without a hitch.

This was done primarily to enable me to set schema when doing intra-period operations - tidying data, adding indexes, setting foreign keys etc - and to enable some more flexible scripting approaches to data import/indexing.

The change - creating the new schemas (schemae? TNIRN) and moving tables en-masse to their new homes - was the only significant change to the database.

Today I tried to perform a standard query of the type that I have performed a thousand times in the old schema-prefixed setup:

I ran that same query just now, within the vm201506 schema, as follows:

To test, I dropped the geography cast, and re-ran the query... this time 'ERROR: Function ST_Area() does not exist'. News to me...

If I add back the schema prefixes and set schema 'public', everything runs fine (ergo PostGIS exists, and both the geography cast and the area calc happen as expected). 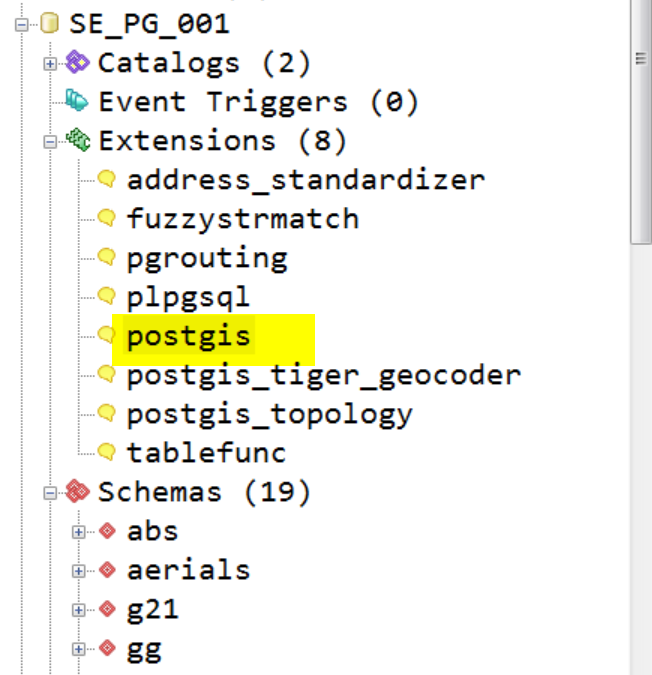 Anyone ever seen this sort of thing before? If so, was it remediable? (Note: restarting PostgreSQL didn't help).

I realise I could simply uninstall and reinstall PostGIS through Control Panel-> Programs and Features, but thought I would pose the question in case it's a symptom of something egregious. There's no indication of a pending disk failure.

UPDATE (no way to spend a Sunday afternoon)... So I took this opportunity to

Everything went off without a hitch.

EXCEPT ... the problem still exists in a very slightly modified form.

In 9.3.5 I got an error - even with set schema 'public' for select postgis_full_version(). Now I get the output I expect - namely

If I set schema to anything else, select postgis_full_version() chucks an error- good old 'function does not exist'.

You need to make sure your set search_path call always includes the schema postgis is installed in.

So instead of doing:

Make sure you are doing

If you have other tables in public you don't want seen, then move postgis into another schema and make sure that schema is always included.

My favorite is postgis

Not the answer you're looking for? Browse other questions tagged postgis postgresql windows-7 64bit or ask your own question.

2
QGIS - load data by SQL window
7
PostGIS ST within does not exist
2
Can't import shapefile to PostGIS
6
PostGIS Topology Requires Admin
3
Unable to connect to PostgreSQL database using schemas
6
PostGIS functions do not exist even when public is in the search path
3
QField App crashes when connect to internal server of PostgreSQL and PostGIS
4
Use PostGIS functions from an other schema (than public)
1
Making PostGIS extension persist in the search_path of a PostgreSQL database?