I want to use the Ordnance Survey Land-Form Panorama product in some software called Maperitive, which can read custom SRTM DEM files.

The data is provided in the following formats:

Can anyone recommend a free tool or toolchain (runs on Linux or Windows) that I can use?

Try gdal_translate on the ASCII grids, part of the GDAL open-source package. Something like so (I'm on Windows):

I had to override the output spatial reference with the -a_src flag to get this to work, and I'm not sure what coordinate system that data is in, as it ships with NO METADATA and their site isn't any help either. So you'd have to find that out for sure and then maybe force the EPSG code (EPSG:27700 for British National Grid, for example) on your output file. Here is the output DEM in QGIS: 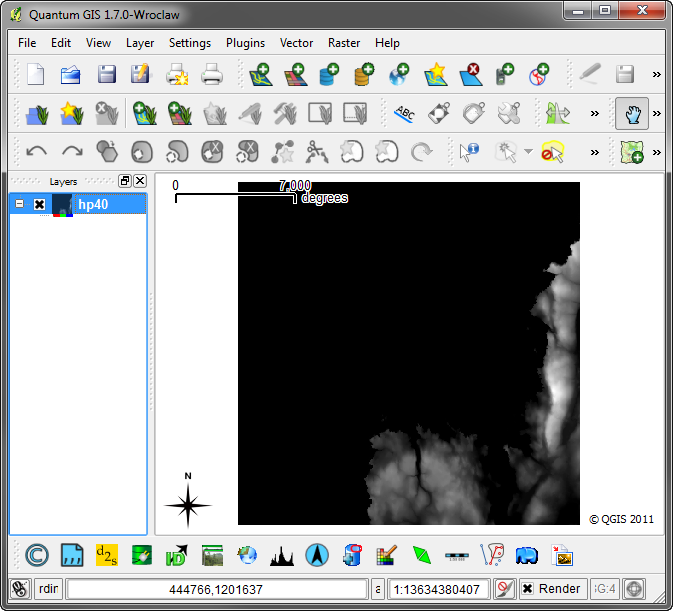 Looks like outside the U.S., SRTM3 is the standard, and looking at this doc (which I found here from here), the standard calls for SRTM3 to be 1201x1201 pixels, which these grids are not. Now I'm stumped. Could you just use SRTM data from the USGS instead?

SRTM3 files contain 1201 lines and 1201 samples. The rows at the north and south edges as well as the columns at the east and west edges of each cell overlap and are identical to the edge rows and columns in the adjacent cell. SRTM1 files contain 3601 lines and 3601 samples, with similar overlap.

Not the answer you're looking for? Browse other questions tagged raster convert dem ordnance-survey srtm or ask your own question.

3
Can I convert ESRI Grid (DEM) raster to USGS DEM?

17
Using SRTM Global DEM for Slope calculation?
0
How can I convert SRTM data to DEM or DTED?
7
Does a value in srtm dem file refer to the center or corner of a cell?
2
Does a SRTM DEM image show details such as fields?
1
SRTM DEM and satellite DEM fusion