How do you choose the classifications on choropleth maps?

I find myself more and more struggling over defining break points when displaying choropleth (aka thematic) maps to view by others. Does anyone have any suggested references that help guide, both how to choose the type of scale used and the appropriate number of break points? In particular for the number of bins I have only ever seen arguments for a limiting number (e.g. you should not use any more than 5).

To be more specific about what I am looking for, most references I have come across about the subject are similar to the document referenced by julien in this post, and I'm just looking for a more in-depth discussion about the topic.

A few specific use cases I come across frequently (for examples of my struggles);

I initially wrote a paragraph trying to describe the goals of such maps, but I suspect my goals are pretty typical so it was unneeded. The only thing to clarify again is that these are for viewing by other people (like in reports, publications) and are not really for my own exploratory data analysis (although I would suspect good advice should translate to either). Perhaps a good reference may describe the potential goals of such maps, and trade-offs associated with using different classification schemes. I would be interested in both specific and general references.

A great reference, not cited enough, is "How Maps Works" by Alan M. McEachren (The Guilford Press, 1995/2004). It's not a quick guide but a comprehensive reflexion on how maps are seen and understood, based on a really impressive scientific survey and the knowledge of practitionners.

I recently purchased Thematic Cartography and Visualization (Slocum et al., 2005), and just skimming it appears to be more than sufficient for my request for general references on the topic of choosing bins. It will certainly give me plenty to read for quite some time, and it wasn't too arduous a decision to buy (there are many older cheap copies floating around).

Note I do not think I would recommend MacEachren's How Maps Work for this question in particular. The book is so monolithic I might have certainly forgot, but I do not remember any straightforward discussion about choosing the number of bins (at least not as straightforward as the chapter devoted to it in the Slocum textbook). If anything I think I remember him mentioning the topic is a bit over-done and has not come to any real conclusion, but I would certainly recommend it as a general reference for data visualization anyway.

There is a crazy amount of literature on the topic, and I will have to do some more self-study to see if I can come up with a more satisfactory answer for classifying the skewed distribution. And I will post back if I have anything more substantive to say.

But for the second question about visualizing small multiple maps I recently came across an article by Cynthia Brewer and Linda Pickle, Evaluation of Methods for Classifying Epidemiological Data on Choropleth Maps in Series (PDF here), that is exactly aimed at my question.

In short there experiments suggest quantiles are the most useful way to represent a series of small multiple maps, both for the ease in interpretation (as I suggested in the question) and the fact that they produce equal area maps in terms of fill when the polygons are roughly the same size. This perhaps is not obvious until you see a counter example, below I have pasted a picture of some small multiple maps in which the classifications are constrained to be equal across the series of different rates of cancer (on page 674 of the cited article). 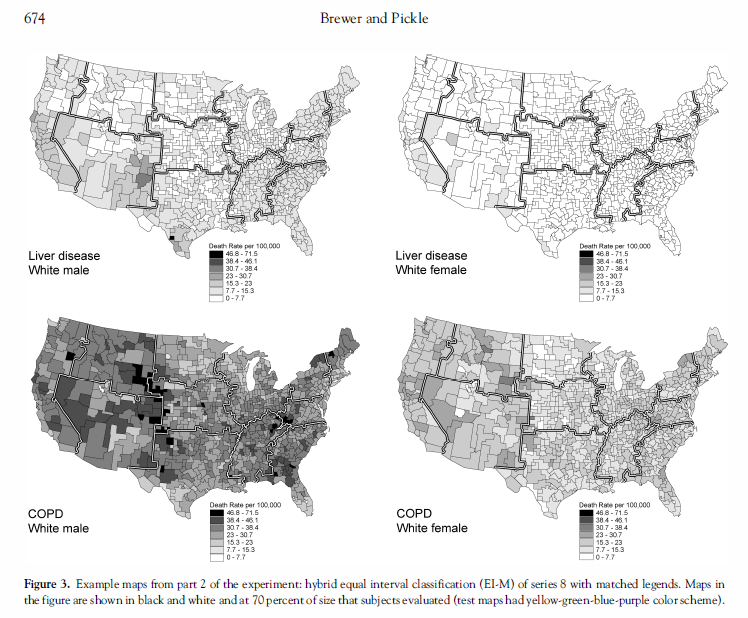 Because the incidence of liver disease is so much lower than COPD, all of the counties in the top maps tend to fall into the lower classifications. If you can't discriminate patterns within one of the maps you will be unlikely to distingish patterns between maps! Of course if reasonable one should make the classifications consistent, but that is only reasonable for some comparison maps. Also as far as the number of bins they chose 7 in their experiments.

see this ref. Optimising the Selection of a Number of Choropleth Map Classes

Not the answer you're looking for? Browse other questions tagged visualisation thematic-map or ask your own question.

184
Seeking examples of beautiful maps?
7
How to normalize choropleth maps of census information?
6
How to design class breaks for a time series of choropleth maps?
1
Which bins should be used for demographic data for a choropleth map?

13
How to create spatial tag clouds or “tag maps”?
10
How to automatically set polygons borders to improve map readability when rendering thematic maps?
7
How to normalize choropleth maps of census information?
8
How to adjust the granularity of a heat map in QGIS?
7
Is dynamically generating Choropleth maps a solved problem?
18
How to create an attractive choropleth map in R?
0
Why can't I load more than 12 elevation files into NVIZ?
6
How to design class breaks for a time series of choropleth maps?
1
Visualisation of “dominant” point in each location