Measuring straightness of a curve segment (represented as a polyline)

I'm working on an automatic elevation contour labeling algorithm and one of the factors that I want to take into account when deciding the positions of labels is how "straight" a particular segment of a contour is. The more straight it is, the more likely it is to be used to place the label on that segment.

Each contour is represented by a polyline (but with points close together as to look like a curve to a naked eye). I then have a fixed length (width of a label), say, 100 pixels. If I randomly (or otherwise) choose a contour segment with the width of 100 pixels, I want to be able to get a numerical quantitative value of its straightness (say zero for a totally straight contour segment, some value larger than zero for a not so straight segment, and this value increasing as the crookedness increases).

I've searched around for answers but I couldn't find anything really useful. I'd be grateful for any pointers.

The answer depends on context: if you will be investigating only a small (bounded) number of segments, you might be able to afford a computationally expensive solution. However, it seems likely that you will want to incorporate this calculation within some kind of search for good label points. If so, it is of great advantage to have a solution that either is computationally fast or allows for rapid updating of a solution when the candidate line segment is varied slightly.

This consideration rules out many possible measures of fitness (sinuosity, tortuosity, etc.) that otherwise might be attractive. It leads us to favor L2-based measures, because they typically can be updated quickly when the underlying data change slightly. Taking an analogy with Principal Components Analysis suggests we entertain the following measure (where small is better, as requested): use the smaller of the two eigenvalues of the covariance matrix of the point coordinates. Geometrically, this is one measure of the "typical" side-to-side deviation of the vertices within the candidate section of the polyline. (One interpretation is that its square root is the smaller semi-axis of the ellipse representing the second moments of inertia of the polyline's vertices.) It will equal zero only for sets of collinear vertices; otherwise, it exceeds zero. It measures an average side-to-side deviation relative to the 100 pixel baseline created by the start and end of a polyline, and thereby has a simple interpretation.

Because the covariance matrix is only 2 by 2, the eigenvalues are quickly found by solving a single quadratic equation. Moreover, the covariance matrix is a sum of contributions from each of the vertices in a polyline. Thus, it is rapidly updated when points are dropped out or added, leading to a O(n) algorithm for an n-point contour: this will scale well to the highly detailed contours envisioned in the application.

Here is an example of the result of this algorithm. The black dots are vertices of a contour. The solid red line is the best candidate polyline segment of end-to-end length greater than 100 within that contour. (The visually obvious candidate in the upper right is not quite long enough.) 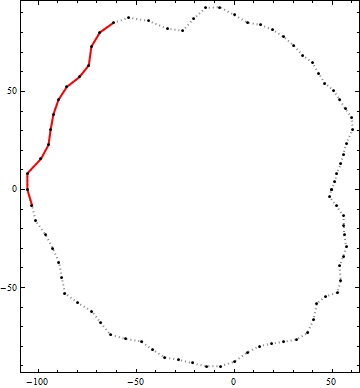 In the computer graphics community, it is often necessary to find a bounding box around an object. Consequently, that is a well-studied problem, with fast algorithms. E.g., see Wikipedia's Minimum bounding box algorithms article. You could find the minimum-area rectangle surrounding your polyline, and then use the rectangle's aspect ratio, height/length. To get a more precise measure, you could look at the deviation of the polyline from the centerline of this bounding rectangle.

I don`t know if this helps, or even if it counts as an answer, but as I was sitting here thinking about the question I just posted, I had a thought:

You could figure out what length would give the best indicator of straightness, and set up a routine to step along each contour line and where it was straight enough, place the label.

I'm sure this doesn't help too much, and what I say in English is a lot more difficult in whatever programming language you`re using, but it might be a start?

The easiest approach I can think of is the ratio between the actual path length between start and end and the shortest distance (straight line) from the start to the end point. Straight lines will have ratios close to one while very curved lines will have a very high ratio.

This should be a really easy to implement solution.

Update: As Mike noticed correctly, this would equal Sinuosity. 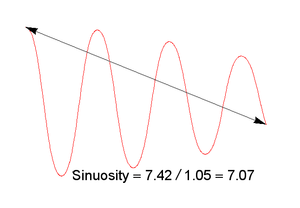 By searching "curvature" and "polyline", I got this info How can I find the curvature of a polyline?. There he suggested using go back to definition of curvature - K= DF/Ds. Here by F he means phi, or T in wikipedia's notation here (http://en.wikipedia.org/wiki/Curvature).

Say you have a sequence three points, p0, p1 and p2. calculate distance s between p0 and p1, which is delta of s (Ds), assuming points are close enought to each other. Then you need delta of T (DT), which is change in unit tangential vector between p0 and p1. there may be sophisticated way but the crude method i can think of of to take two bectors p0->p1, p1->p2, normalize each to have length of one, then take vector subtraction of those two then determine the magnitude. That is DT. Division yield a curvature K0_1. grab p1, p2 and p3 to calculate K1_2 and so on.

I am wondering though if you get hold of the contour as a polyline, not as a rendered pixels. You said 100px so that make me worry a bit.

Not the answer you're looking for? Browse other questions tagged labeling geometry line contour or ask your own question.

4
Measuring polyline lengths running through a raster - is this possible?
2
Segment matching on a polyline
0
Can ESRI JS API show PolyLine as Bezier curve?
2
How to find point on polyline using a starting point and a distance along the curve using ArcObjects
4
How to get leaflet polyline segment length?
0
Determining the Longest Segment of a Non-Continuous Polyline
2
Determining azimuth of continuous polyline segment
1
Measuring length from one polyline vertex to other polyline
3
Measuring distance between two points on curve line in QGIS