In hyperbola model of how GPS equations are solved, why do 3 satellites give only 2 hyperboloids and 4 satellites only 3?

The Hyperbola depiction of how the GPS equations are solved:

From several psuedoranges measured at the same time, we can calculate the (absolute) difference in the distances between us and these GPS satellites. 2 satellites gives us 1 known difference in distance, and we can plot our position along the surface of a hyperboloid where all points at the surface have the same (absolute) diff in distance to the 2 satellites. From there we can add an other or several other additional satellites to make more hyperboloids which will create an intersection point at our (receiver) position. We will need 3 hyperboloids to make one point of intersection.

Formula taken from one of the answers under: k satellites in general position do determine k(k-1)/2 hyperboloids

So, why do we need the 4th satellite, when it is not needed to make 3 hyperboloids?

EDIT: I answered this question originally with the assumption that there was only one way of understanding the way GPS works. There's a good few paragraphs on Wikipedia: https://en.wikipedia.org/wiki/Global_Positioning_System#Geometric_interpretation

I don't understand why you can't have more hyperboloids. I wonder if there is no value at adding more hyperboloids, i.e., including more than 3 'differences' when you have 4 satellites doesn't increase the amount of information?

I thought having two satellites to measure your distance from would give you a circle (the intersection of two spheres. And that three satellites gives you two points, one near the Earth's surface and one up in space somewhere. I don't think that you do get hyperboloids so I am keen to see a reference.

Also, note that in order to measure distances, your receiver needs to solve for time too, so you need at least four satellites. (You also need the almanac that tells you where the satellite is at a particular time, and that's transmitted in the signal from the satellites, or used to be, which is why it took ages to get a first fix on old hardware).

When you switch the GPS on, the time-to-first-fix varies depending on how long it is since you last used the GPS. To get a fix, the GPS receiver needs a valid almanac, initial location, time, and ephemeris data.

The terms "cold/warm/hot start" indicate how many of these pieces of data the GPS receiver already has. The terms mean different things to different GPS manufacturers.

Cold start - if the GPS not been used for a long time and/or has moved several hundred kilometres it will take some time to get the first fix. In this state, the GPS receiver does not have a current almanac, ephemeris, initial position or time. Older GPS units may take up to an hour to search for satellites, download the almanac and ephemeris data and obtain an initial position, though newer GPS units may require much less than this.

If the GPS receiver has moved several hundred kilometres, its assumptions about which satellites to use will be incorrect and it will have to search for them. Most units will let you enter an approximate location to speed the process. 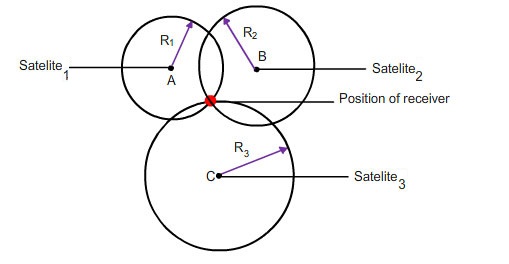 3 Satellites indeed provide 3 equations, not for hyperboras but for hyperboloids. Whenever 2 hyperboloids intersect, there generates a curve. Thus, it appears that 3 satellites are enough that generate 2 curves that meet at a point. However, there are special cases where the 2 curves are identical. That is why we need one more satellite to resolve the uncertainty.

An example is as follows. Consider the case where 3 satellites are located at three verteces of a regular triangle and the receiver is at the cercumcenter. Then, the intersection of 3 hyperboloids becomes not a single point in the three dimensional space but a straight line perpendicular to the triangle plane and intersecting it at the circumcenter.

30
Why don't they use cell towers like GPS satellites?
53
Why does GPS positioning require four satellites?
24
How much sense does it make to average (lat,lon) samples in order to increase 2D accuracy of a GPS location?
5
How does a GPS unit ensure it has the same time reference as a GPS satellite?
2
How does my phone get an accurate reference time for calculating distance from GPS satellites?
3
How big is the error of relative elevation between two points taken from GPS relative to taken from a topographic survey?
16
Why are Galileo satellites inaccessible in USA?
1
Options for precise relative position calculations
0
How many GPS-Satellites are needed for time synchronization without positioning