The illustration below shows the problem:

as in (a) I have a set of disjoint polygons, as geometries in PostGIS. I need something like (b), the "mosaic" of this set of polygons, building it by a "influence region" criteria... Is like a Voronoi construction (illustrated by (c)): in fact, if the polygons was points, the influence regions are Voronoi.

Summarizing: I need a SQL algorithm (or some specific for PostGIS) that generates the "mosaic" of a set of disjoint polygons. (perhaps a loop of little ST_Buffer and ST_Difference operations)

PS: I need, like Voronoi's, that space delimitation (a squared frame in (b)) is ignored.

This problem is similar to this other about lines.

I preffer to stay in vector universe, to not lost precision (ex. using ST_DelaunayTriangles and adding and subtracting interiors by the original polygons, them adapting a dual graph solution)... Some simple and automatic packages like pprepair (assisted like QGIS topological tools are not automatic). But raster is perhaps simpler and less CPU-consuming.

This "GRID process" illustration is also valid as solution, assuming that it can allowing same precision and "euclidean influence region growing".

In ARCGIS exists a spatial analysis tool known as Euclidean Allocation, so, perhaps there are a PostGIS similar solution, starting with the set of polygons (classifying, rasterizing and making-back the polygons).

So, I will prepare a cake for you - fruit platter, using PostGis tools, as you requested, if I correctly understood the question, and as I mentioned, the responsibility for the operation of the PostGIS oven is borne by her creative team.

I will ask not to be offended by anyone in my humorous style and to understand it as a game!

The original file is sliced fruit and simple shapes (hereinafter referred to as fruit), see Figure 1 below. 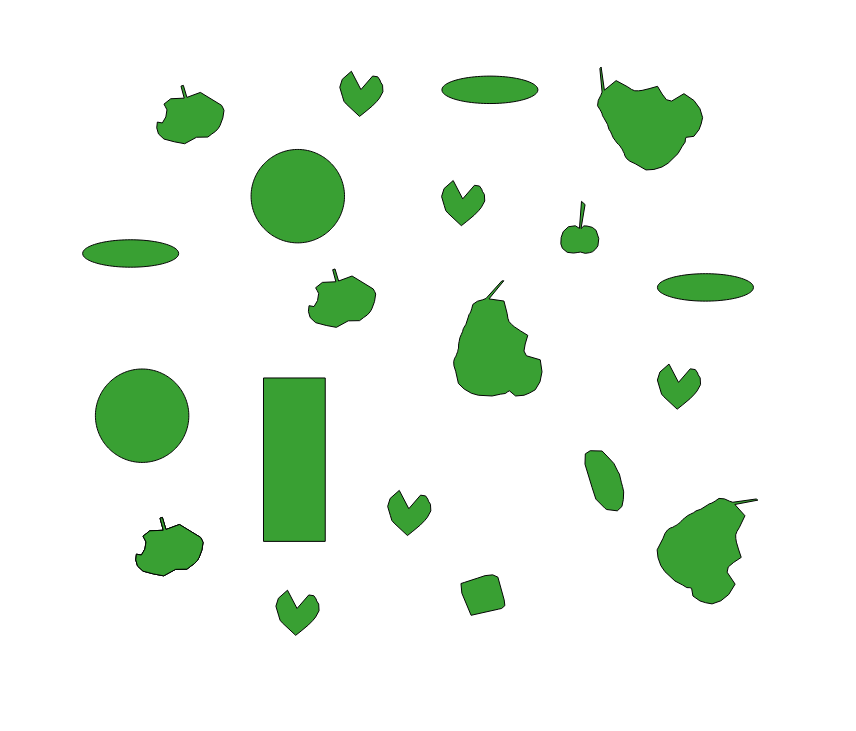 Here is my recipe, and I will be helped in this by dear programmers, whom you will learn about later. Let's begin, and for this we will create a dough in which our fruits will be laid, for which run the script:

create table poly_extent as SELECT ST_SetSRID(ST_Buffer(ST_Envelope(ST_Extent(geom)),0.05),4326) as geom FROM poly;

See the result in Figure 2 below 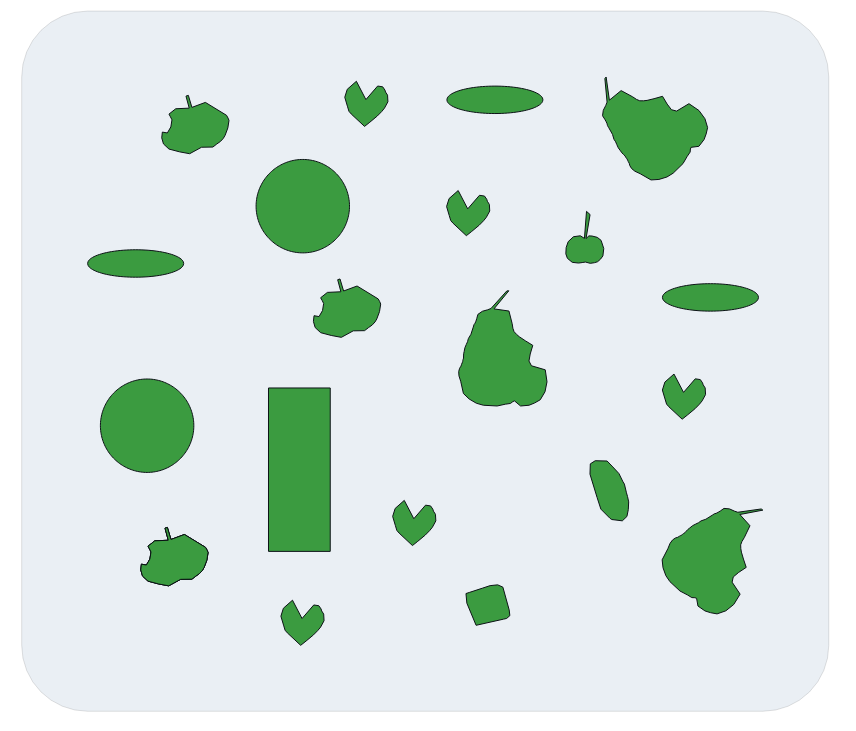 And slice the buffer lines around each fruit 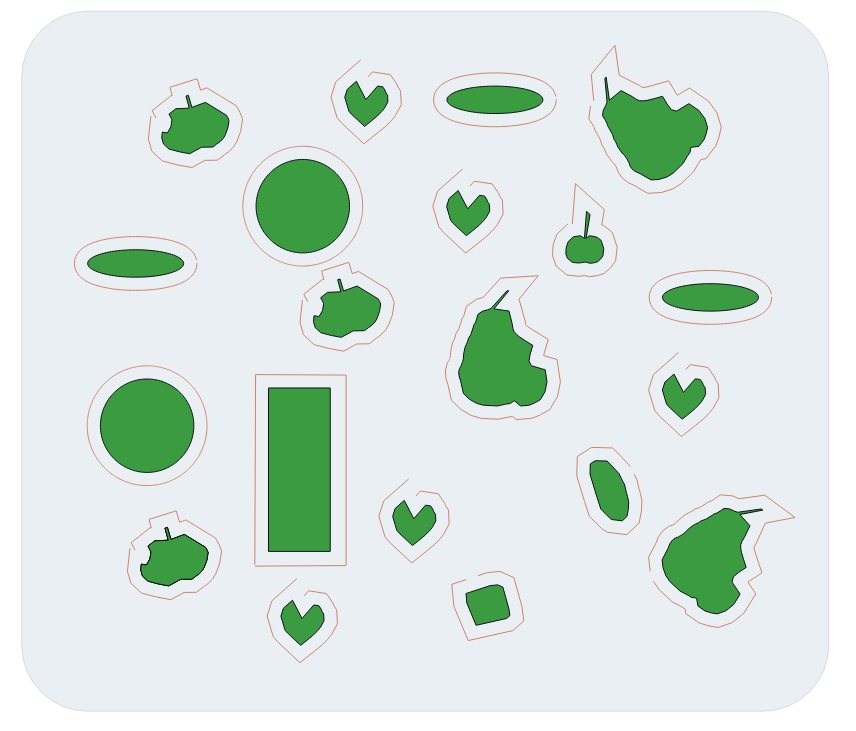 (Actually, I thought that as a result I would get broken lines (such as in a circle), but if the figures are difficult, sometimes breaks are obtained, incorrect ones, for example, one side of the rectangle fell off, etc.) 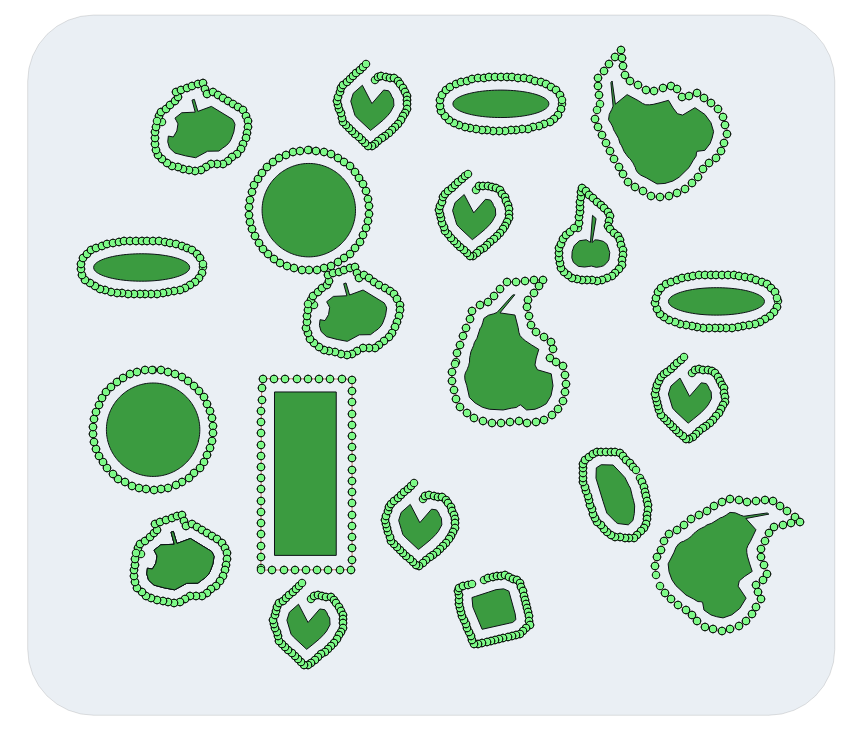 Now run the Voronoi tool, in this place I used the tool suggested by the link MickyT :https://gis.stackexchange.com/a/172246/120129 , as a result of which you will have created tables with the name “voronoi” for the fact that “my first assistant” is separate from the chef thanks from the chef! :-).

The second way in this step is to run the ST_VoronoiPolygons function. 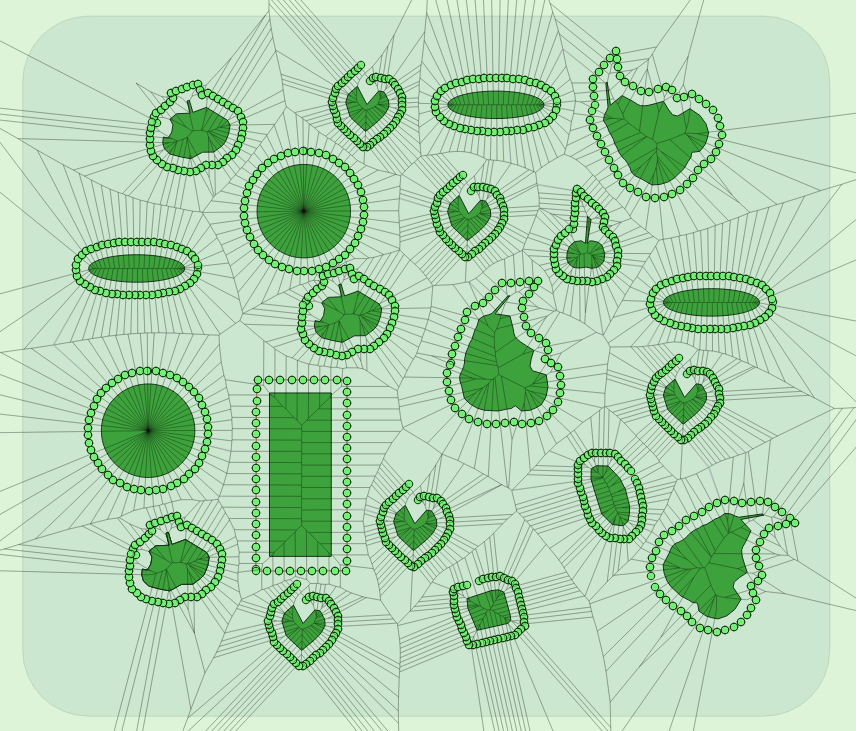 Now, cut off the extra parts by running the script: 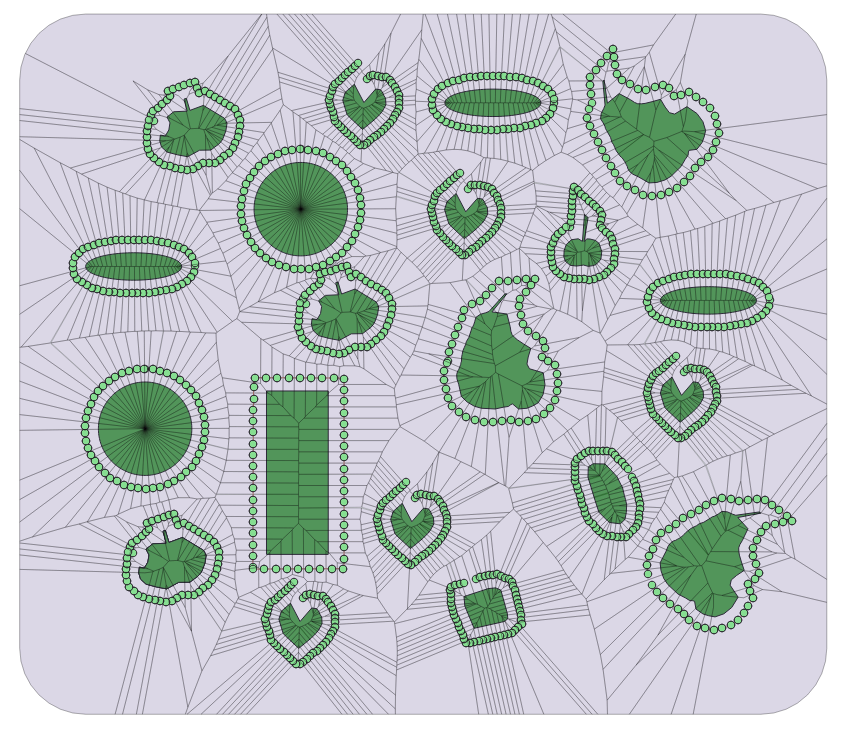 Now run the script in order to align the geodata type in LineString:

create table poly_voronoi_dump as SELECT (ST_Dump(geom)).geom as geom FROM poly_voronoi_cut; And now I will ask "my second mate" to take up my duties and mix the cake wel (Jeff - https://gis.stackexchange.com/a/785/120129), leveling it in a single layer, and for that, thanks to me for it! 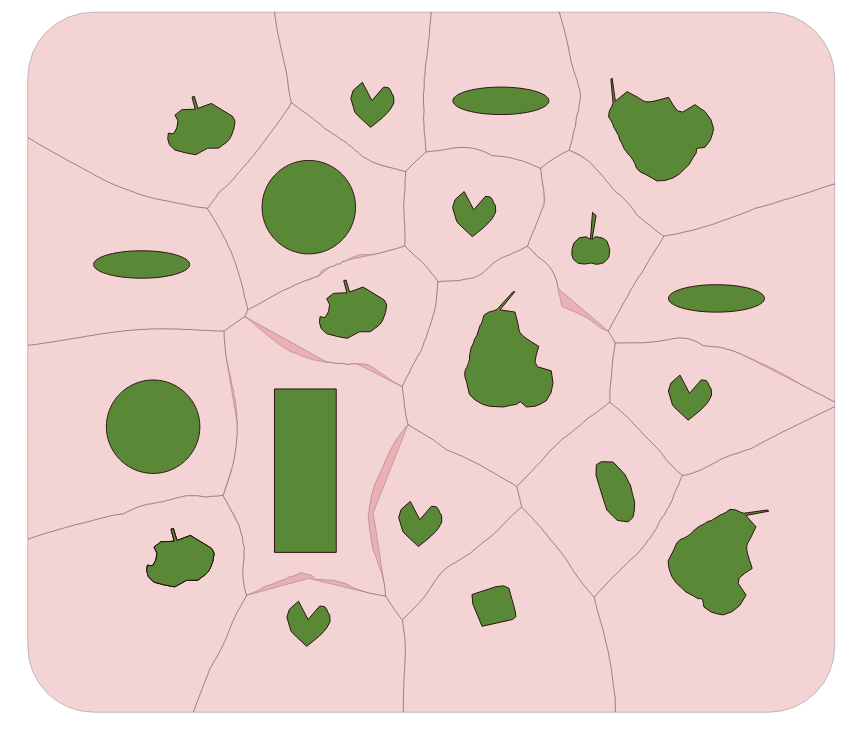 As you can see in the picture, our cuts have small layers, which can be removed, as an option using ST_SnapToGrid (or in another way):

And finally, we will cut out our baked fruit from our pie, I even got a little tired standing by the oven, :-) 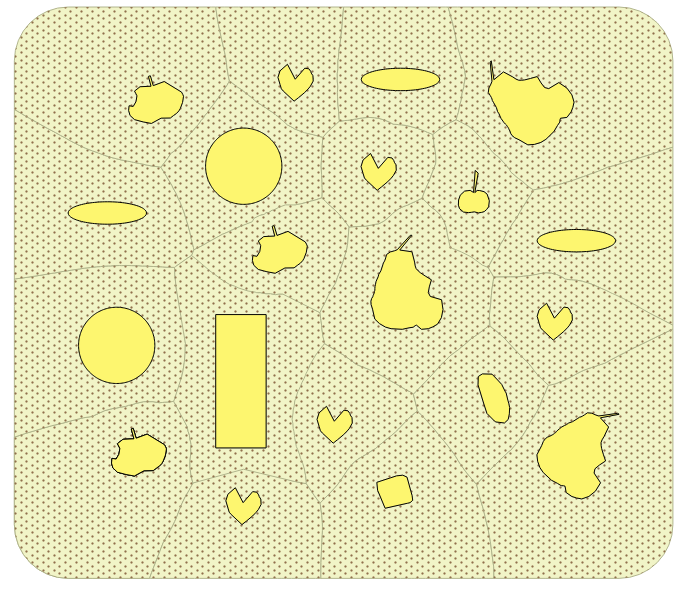 Everything from this day, now everyone will learn to bake delicious pies - fruit platter. Help yourself All, and choose the pieces you, likeenough for everyone.

(It’s a pity that I really can’t feed all people, not with electronic cakes, but with real cakes, perhaps hunger would end on Earth ...)

Edit: The cherry on the pie could look like this :-) :

This script is called: ST_VoronoiDiagramsFromPolygons.

Postgis do not have a dedicated function for voronoi, but Qgis contains vornoi function which could make voronoi polygons from points, so using qgis i've followed the following steps to have these result:

-make a spatial join in Qgis. 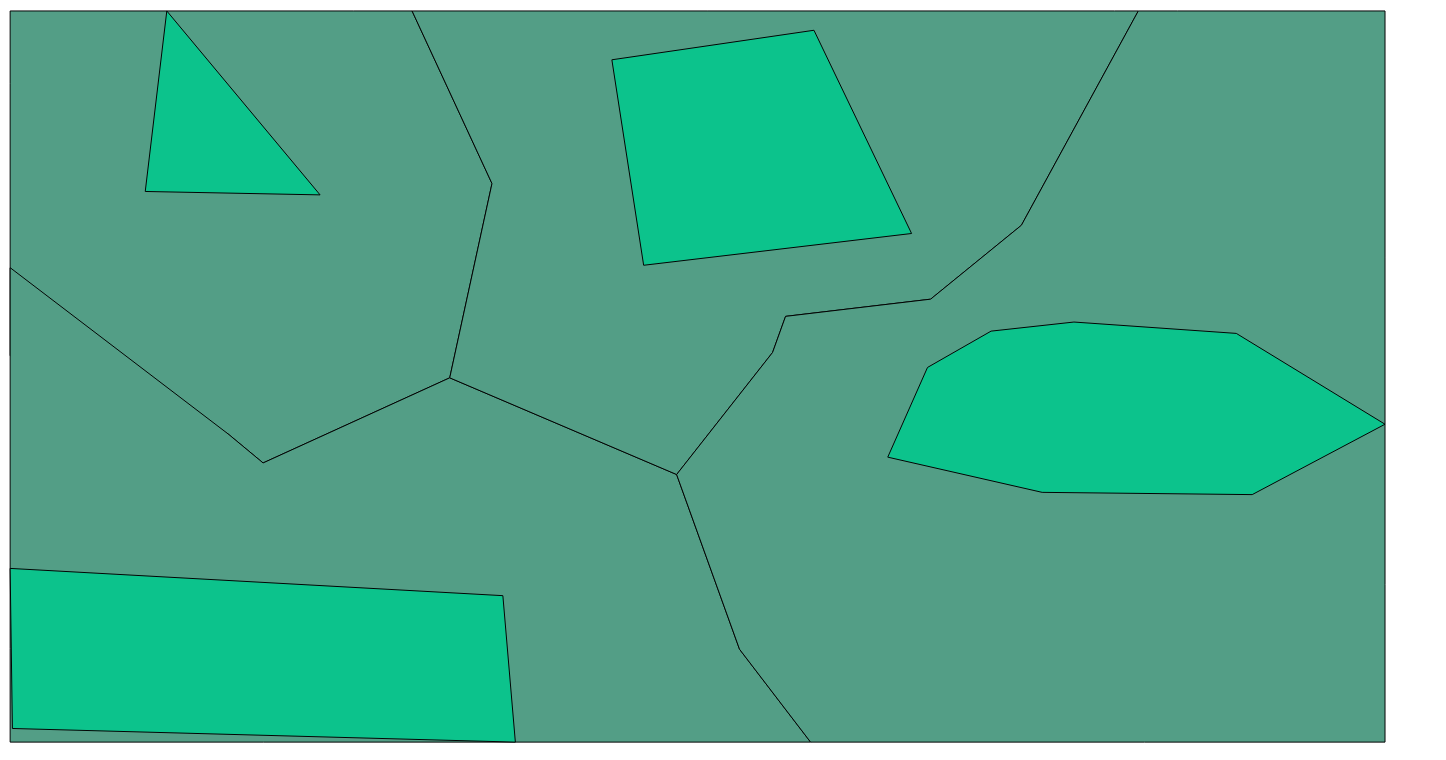 OK - Thought about this a little and found it was like something I have been looking at lately. 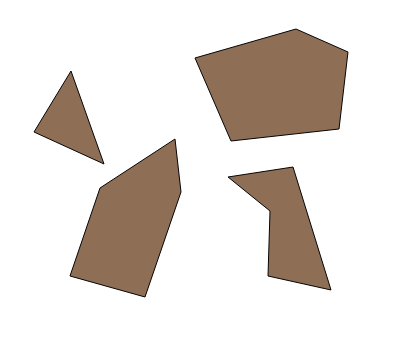 Generate a new attribute with a number (100 in my case) Use the Vector-> Research tools -> Random points inside polygons tool this will generate (100) points inside each polygon: 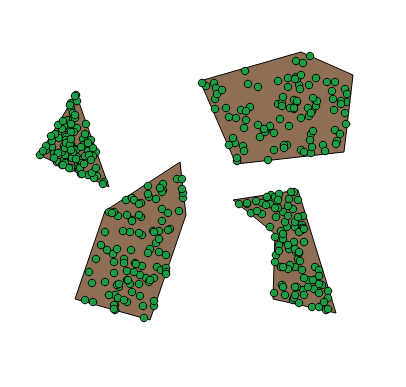 Then Vector-> Geometry tools -> Voronoi to generate polys based upon that point layer. 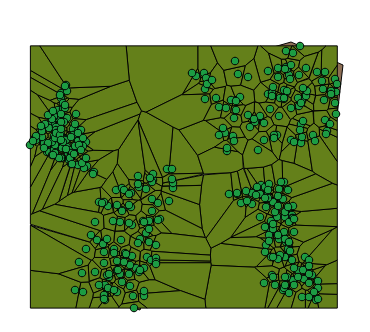 Now, you can use the Vector -> Spatial Query tool: Select the points that belong to one polygon (or one of the polygons) Use the spatial query tool to generate a selection of your voronoi polygons which apply to that polygon. Add an attribute to the voroni polygon which corresponds to the polygon of interest. (I just used 1,2,3,4)

Now you can Vector-> Geoprocessing Tools-> dissolve based upon your new attribute. 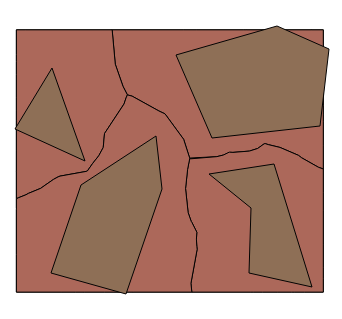 Random points are a good idea to generate a voronoi polygon from polygons, it works pretty well, but it's pretty bad for polygons close to each other: 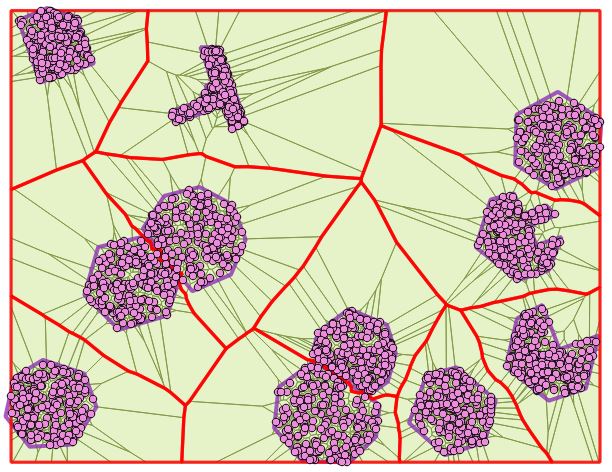 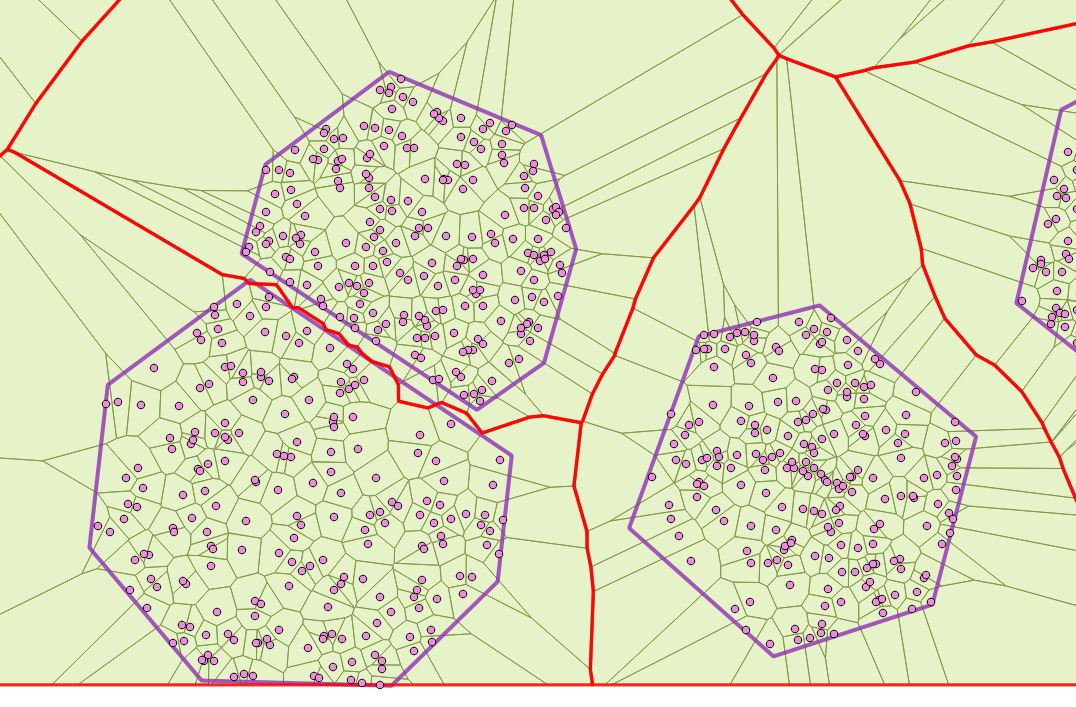 ST_ApproximateMedialAxis is another good alternative if using PostGIS: Calculating Voronoi Diagrams for polygons

Not the answer you're looking for? Browse other questions tagged polygon-creation voronoi-thiessen or ask your own question.

36
Separate polygons based on intersection using PostGIS
16
Simplifying polygons to linestring?
14
Create voronoi diagram from line segments
12
How to use ST_DelaunayTriangles to construct a Voronoi diagram?
12
Constructing Voronoi diagram in PostGIS
6
How to create random points in a polygon in PostGIS
3
Calculating Voronoi Diagrams for polygons
8
Creating voronoi polygons from polygons?
11
Point sampling along a pole-wrapping coastline with PostGIS