Why am I getting the error message

The following layers were not correctly generated: Output

when writing a script that uses the QGIS geoalgorithm "Select by attribute"?

Here's my script (My "Input" and "Output" parameters are set in the GUI when the script is run.):

I used this format after looking at the HELP tab of the "Select by attribute" tool and seeing the following instruction:

Confusing then, to find the answer (helped by @StephenKay) is to remove the final parameter ('output'). Would have been less misleading if the tool's own HELP tab did not show it as the 5th and final parameter, or at the very least indicated that it is an optional parameter (as the tool clearly works without it).

Tip - if running under Linux at least, stating QGIS from a terminal gives a lot more debugging info, including some errors which don't get as far as the gui.

In your case, it says that the number of parameters is incorrect.

If you look at the answer @gene gave, you'll see that final parameter isn't needed.

Removing the final output parameter gets rid of that, but you still get the 'unable to load /tmp/processing/....'.

The reason is the output isn't being generated.

It seems that this particular algorithm creates a selection on the input layer, but doesn't actually create the output layer for you.

But you can then copy the selection to the output layer using runalg('qgis:saveselectedfeatures',input,output), which fixes the problem.

I've switched it to using == (operator 0) which I think was your original intent. Also added a text value you can use to specify the value you want to compare to.

The last line is optional but it clears the selection on the input layer. Without this, running a second time will only run against the selection from the previous run, so you'd need to manually "deselect all" on the layer.

It might be that you need to add the final "output" param if running from the console, but in this case you're writing a user script. Hopefully someone can clarify why you need to remove the output parameter, and whether it's just for this particular algorithm.

Now you should be able to run it from the processing panel, or drop it into a model.

1) Processing has a log file located in the /.../.qgis2/processing folder (processing.log). if you open this file, you find the result of the process (or the resulting errors that allow you to solve them theoretically...)

The result of the "Select by attribute" Toolbox command is 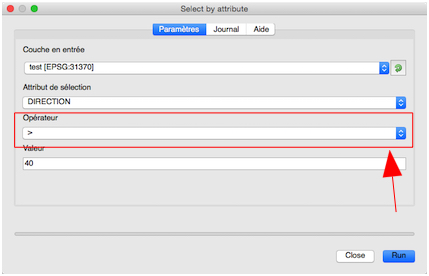 Just my own 2 cents after scouring the internet for QGIS scripting resources similar to the excellent ArcGIS Help page.

ESRI has a long history, many developers and a lot of money when QGIS is young and depends on the goodwill and efforts of the QGIS community. For the moment, the only solution is to search into the documentation, GIS SE, blogs or use books as The PyQGIS Programmer's Guide, QGIS 2 Python Programming Cookbook and other books of Packt Publishing) and you can participate if you want.