I have accomplished the Python script, but only tested in desktop environment, i.e. ArcMap.

A number of my questions on GIS.SE have been related to accomplishing a single, overarching problem that I have run into. In a nutshell, I want to enable a user of a Flex client application (using the ArcGIS API for Flex) to be able to select (via checkboxes) raster data to be used in a geoprocessing task that does the following: generates a Map Algebra expression to be used in a Raster Calculator operation and then performs Zonal Statistics (the user can also select the zone data attribute), then return a result map service with predefined symbology.

The two primary challenges to this task have been twofold:
1) Creating a dynamic map algebra expression that is dependent on the rasters selected by the user. Additionally, the documentation states that the Raster Calculator tool is not to be used outside of ArcMap and is not available in ArcPy. I have found that this similar task can be accomplished with the Spatial Analyst module and using the Addition Operator, but to accomplish what I have in mind would seem to require more processing time , i.e.

2) And the primary and seemingly insurmountable hurtle: using raster data as the input. I have tried various approaches [1], [2], and [3].

The ESRI documentation states that raster data cannot be used as input to a geoprocessing service/task. However, I have found the company Azavea has accomplished this via their Decision Tree product [4], [5]. I also found this whitepaper that states the following about possible workarounds for using raster data as inputs: 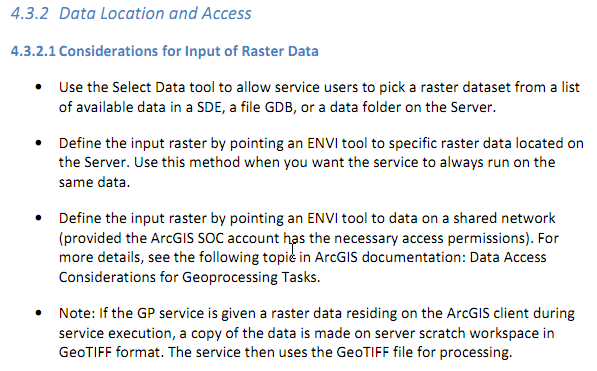 What I am looking for in an answer is a concrete example of one of these workarounds for raster input implemented in Flex and a Python example for the dynamic map expression. Please let me know if the relevant Flex application code I have developed, the structure of our IT architecture, or an elaboration on the models we are trying to implement will be useful.

From a technical standpoint, I don't think this sounds too difficult.

One issue you will face is that Python is slow and Raster I/O with geoprocessing services is also slow. If the analysis is being done synchronously (and not emailed to the user an hour later), I would really recommend checking out server object extensions (C#/Java).

I could imagine the basic workflow as follows:

I absolutely love Python, but my feeling is that geoprocessing services with rasters / arcpy are slow. I just think there is too much overhead in instantiating the gp object, and loading rasters into memory.

I wrote up a quick blog post to help get you going on the SOE if you're interested.

Not the answer you're looking for? Browse other questions tagged arcgis-server raster arcpy geoprocessing arcgis-flex-api or ask your own question.