I'm trying to use the tool "qgis:selectbyexpression" in one of my own scripts. But it doesn't work. My question is simple: "Why?" :)

My hunch is with the 2nd parameter, the 'expression' (see "HOW I GOT HERE" below).

HOW I GOT HERE

As with every Q tool from the Toolbox that's new to me I open it up and read up on it in the "Help" tab. Personally, I often find these Help tabs rather unhelpful. Case in point:

It shows the correct order of parameters but without explicit examples of how to fill in them in I'm left guessing.

So I reasoned that the "selectbyexpression" Toolbox tool would work the same as the GUI tool of the same name (top of the Q Project Window, in the Attributes Toolbar? I'm sure you're familiar).

When you run the GUI tool expressions are built something like this: 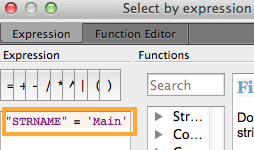 This throws the following error:

I even tried double quotes around the value (the street name) instead of the single quotes:

Interestingly, this one runs without error but nothing actually gets selected.

I could go on trying various permutations of single quotes, double quotes, spaces, etc. but I figured the answer is quite simple and someone out there will be kind enough to share.

I would try this:

The trick is to concatenate two strings together, and since each of the strings contains either a single or a double quote, you need to wrap it inside a pair of the opposite type of quotes.

For the selectbyexpression, as you have commented, this would be the equivalent: