I have a Census dataset that contains eight fields with percentages. I would like a python script that finds the highest value between the eight fields, but also tells me which field the highest value came from. I've gotten halfway there using Field Calculator in ArcMap 10.3, using the max(!field1!, !field2!, !field3!) script. 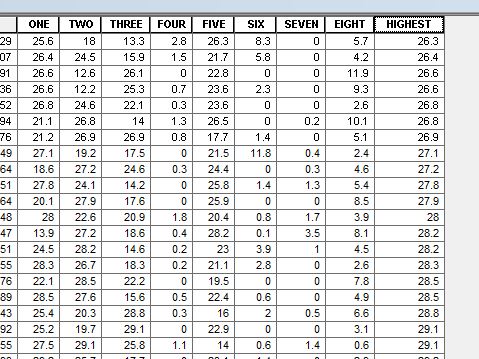 However, I also need it to be able to somehow add the field name because ultimately, the field name is what I want in a new indivisual field, and I will symbolize based on that field.

So far, my programmer colleague helped me come up with the following python script but I am getting an error message regarding my gp and not too python savvy to get it working.

Since your answer was tagged with arcgis-10.3, you'll find there is no need to use arcgisscripting. (I don't even know where to start with it to be honest.) You can also use the updated data access module cursors.

There's no need to use zip or any kind of sorting since you are accessing values on a per-row basis. As you mentioned, you can use field calculator to find the max, which would simplify this somewhat since you can just grab the maximum value inside the for loop instead of calculating it as I'm doing:

As you can see, some of the maximum values are present in multiple fields. The .index() method only grabs the first occurrence, so you'll need to change a few things to get all the field names, if desired.

Not the answer you're looking for? Browse other questions tagged arcpy geoprocessing arcgis-10.3 cursor or ask your own question.

7
Calculating field in which null values may be present?
2
python add fields that may have NULL values
7
Is it possible to calculate statistics across multiple fields in arcpy?
2
Trying to preserve attributes using SearchCursor
0
Update rows based on other rows as script tool?
0
Dynamic update of arcpy.AddMessage progress line in dialog box?
1
Printing name of field with highest value?
1
Using ArcPy cursor to concatenate row values?
0
How to handle A column was specified that does not exist exception. and still put a value where the column should be
1
Update field based on values in other fields using search and update cursors