I am currently struggling with a mathematical problem and can't seem to get it solved.

First I tried to simply use the extent, but since they are rotated, the extent will bring false results. So how do I approach this? I googled for hours and the only thing I could come up with, is to somehow calculate the center of the polygon or somehow temporairly rotate it to 180 degrees and then use xmin and ymin. Here are a few pictures which may help to distract the attention from my bad english (sorry for that btw) 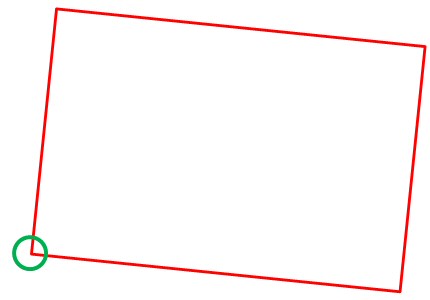 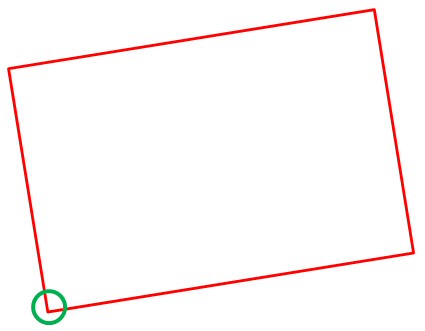 I had no problems exporting the coordinates of the polygons by using the feature vertices to points tool. So far I extracted them once in a list of tupels and once in two different lists (one for x-coords and one for y-coords)

so here are a few coordinates to make it easier to test:

I am currently using ArcGIS 10.3.1 width ally extensions and an advanced license. Version of Python is 2.7.something

Here's a very simple approach that offloads all the processing into the Sort GP tool. Since you have access to an Advanced license, sorting by shape and starting at the lower left corner gives quick results. 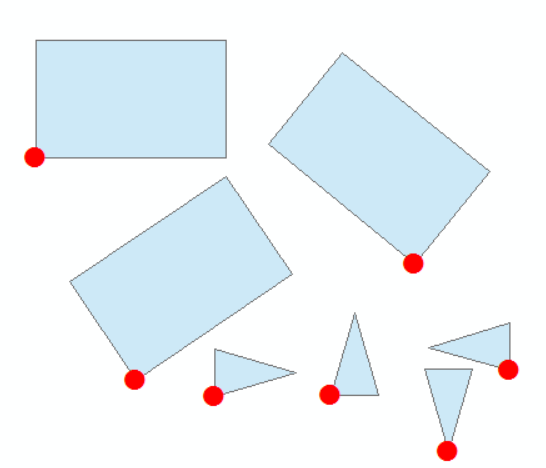 From the explanation on spatial sorting, we see that N/S takes precedence over E/W:

Note that U gets priority over R. R is taken into considerations only when some features are at the same horizontal level.

Given the examples of the rectangles and parallelograms, and if I'm understanding your formulation of "lower-left" (i.e., "the most south-west") correctly, a naive solution:

You could sort the four vertices in order of ascending latitude(i.e., the south-most is first, north-most is last). If two are equal in latitude, their sequence doesn't matter. Then, among the two south-most points, select the one that is further west. This would give you the green-dotted corners in this illustration: 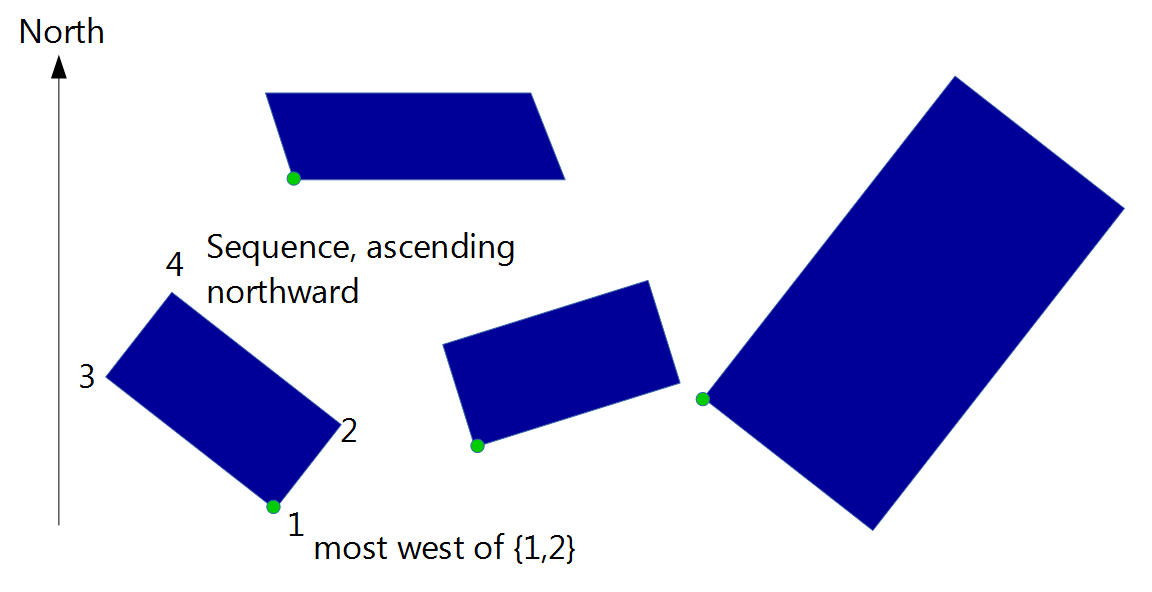 The following might be rare or non-existent cases, but the above falls apart with a quadrilateral where the two vertices between the south-most and north-most are of equal latitude, such as a "diamond" shape, or some deformation of it, or even when a perfect rectangle is rotated just so:

To deal robustly with these cases, you could use an approach that calculates the medial axis of the shape (https://en.wikipedia.org/wiki/Medial_axis), compares it's slope to 45 and 135 degrees, and determines the "bottom" and "top" of the shape compared to that. Then progress as above, with the west-most point of the two "bottom" points being the point to choose. That would work in two of the above illustrated cases. It would still fail in the case of a perfect square in "diamond" rotation - but then there's no "natural" bottom-left corner to that shape. Another way to deal with these cases where points 2 and 3 in the vertical sequence are at equal latitude is to actually take point 1, the south-most point; or the west-most point among 2 and 3.

Not the answer you're looking for? Browse other questions tagged arcpy polygon vertices angles or ask your own question.