Difference between spatial and geometric resolution

I'm confused by what the difference is between spatial and geometric resolution.

Is geometric resolution where a satellite image is said to resolve to 50cm, meaning that's the area on the ground that is sampled into a given pixel... And is spatial resolution defined along the lines of 1000x2000 pixels / square mile? Wikipedia's mention of "(i.e. m2)" makes me think the spatial resolution is defined in a square measurement of ground area, which is the same unit as geometric resolution, which gives me my confusion. Or would it just be said as a 1000x2000 pixel image, with no reference to ground size?

Resolution can be quite confusing as some say that spectral=radiometric, others (1&2) differentiate between the two, and as you noticed, that Wikipedia page spends a whole lot of words trying to separate spatial and geometric.

The wiki page on RS doesn't even mention geometric when discussing spatial resolution. Most articles, books, and papers seem to use spatial, with a few mentioning geometric parenthetically.

Kramer's Observation of the Earth and its Environment: Survey of Missions and Sensors 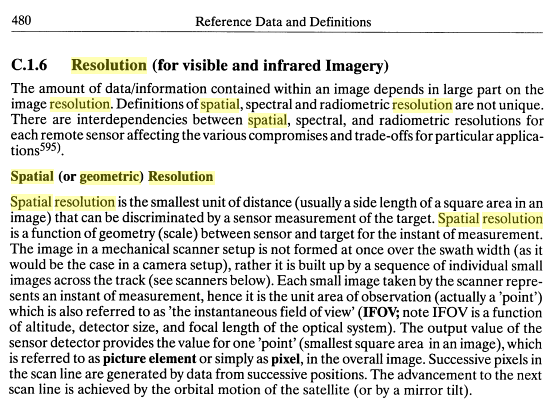 For most intents and purposes? I'd say they are the same.