I have two exports of vector data created some 6 months apart.

How do I find any new objects added in the 6 months, and any attribute changes in the original objects?

An asset_id field exists in both tables as a unique identifier, and will carry through both tables. I can use the "Difference" tool to get geometry changes but can't get the attribute table changes too.

In QGIS, you have a number of options:

Rasters are better suited for change detection so you are best advised to convert the vectors to rasters and follow the above options. If you MUST use vectors for some reason, then simply intersect the vectors (ensuring you keep the relevant code fields). You can then label your polygons as to whether the 'before' and 'after' codes match. Using vectors is likely to result in slivers, so a style that has no outline to the polygons would be best to reduce the noise on your map (it will look a lot like the out put of the raster above, so...). Note, if your vectors cover different areas, you may want to look at the Union tool - in either case go Vector->Geoprocessing Tools

For QGIS there is the tool Detect Dataset Changes available (introduced with QGIS 3.12):

Using this tool you are able to select your two vector layers as input (Original layer and Revised layer) and select the fields which you want to compare (Attributes consider to match).

The output of this tool are three layers as shown on the following screenshot (unchanged, added and deleted features). 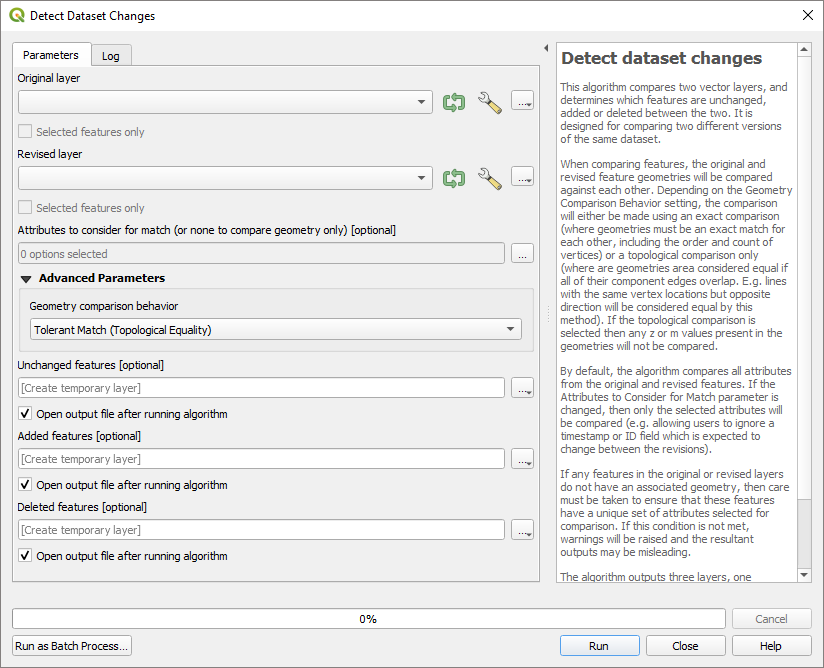 The following script might help you to detect changes between two layers having the same structure.

The algorithm works as follows:

To write the selected features to a new layer "save layer as" with "selected only" option.

The script can be extended to report the differences found in more detail, eg. report wether geometry or attribute differ, and which attributes.

To run the script replace old_layer_name and new_layer_name in line 2-3, copy the code and paste it into Python console.

Not the answer you're looking for? Browse other questions tagged qgis change-detection or ask your own question.

5
How to store the CHANGES to a map database
6
Automatically updating user-edited features in QGIS plugin
2
Points displacement - capture new coordinates?
2
(QGIS) Shapefile with attribute table: Convert it to raster burning values of each polygon to the raster. "Heatmap"
2
QGIS - Return the Intersection xyz Between "Select Features by Freehand" Geometry and Layer Feature(s) into Attribute Table