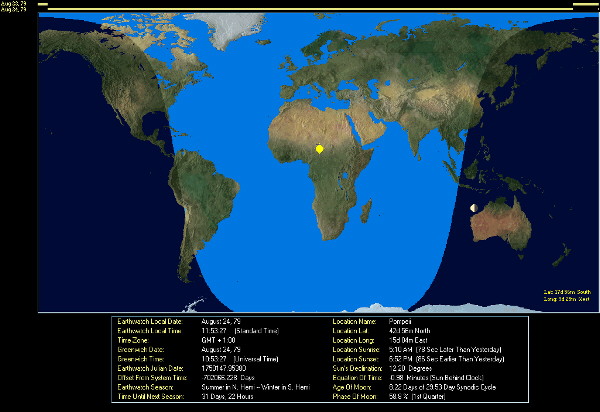 Given the sun's position, you can easily create a grid of the surface light intensity (ignoring atmospheric and topographic effects) in lat-lon coordinates. Reproject that grid as desired and overlay it on the map.

The intensity depends on the cosine between the unit outward normal ("up") direction and the direction to the sun. This cosine is just the dot product of those two unit vectors. That is, let (x,y,z) be the unit vector pointing towards the sun (in geocentric coordinates), convert the geodetic (lat, lon) of each grid cell's center point into a unit vector (xi, eta, zeta), and compute

Any results that are less than 0 correspond to an invisible sun, so set these to zero.

These calculations are straightforward to perform with map algebra, starting either with a grid of (lat, lon) values (that's how I did it) or with a pair of grids, one for latitude and another for longitude (which is how you would have to do it with ESRI software, for example).

(To create a latitude or longitude grid, form the y-coordinate or x-coordinate grid, respectively, in geographic coordinates, then project it.) From this initial information compute, once and for all, three grids [xi], [eta], and [zeta] (or a single vector-valued grid [xi, eta, zeta]) to represent the upward directions at the grid cells. For any given sun position, the calculation becomes the simple linear combination of [xi], [eta], and [zeta] given above; the sun determines the coefficients x, y, and z (which are just numbers, of course).

Here's a world map in Plate Carree projection of such an intensity grid (216 by 432 cells). 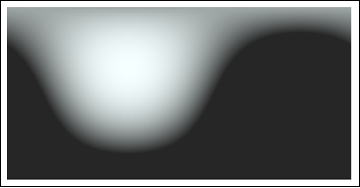 The prime meridian is in the center and north is to the top, as usual. For this calculation I set the sun vector proportional to (0.6, -0.8, 0.5), to approximate a summer's day at noon over the mid-Atlantic ocean. (In retrospect, a z-value of 0.4 would be more realistic; the sun never gets quite this far north.)

An alpha-overlay (which makes the brighter areas slightly more transparent, too) on an Aster colorized map produces this image. 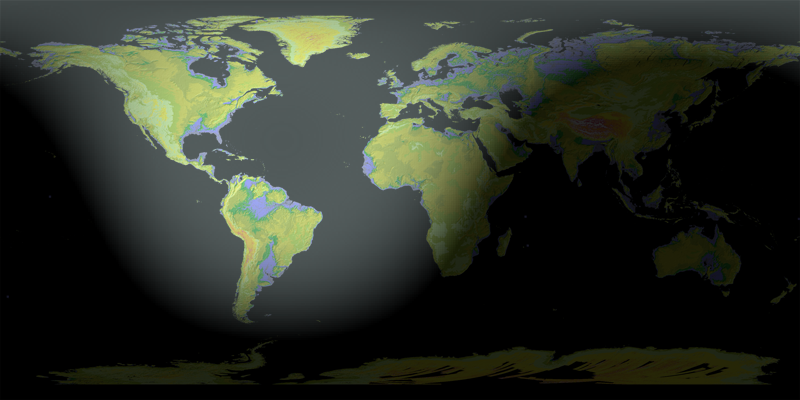 As time changes, the sun's vector (x,y,z) gets recalculated, requiring a recalculation of the intensity grid. This is a fast calculation. You don't need high resolution, either: I used just one-tenth the resolution of the original grid (2160 by 4320 cells) for this illustration. The interpolation used to display the coarser intensity grid works just fine to fill in the gaps. This should enable you to modify the display almost instantaneously if you like, creating a smooth animation.

Not the answer you're looking for? Browse other questions tagged qgis raster arcgis-9.3 overlay or ask your own question.

4
Overlay polygons on raster colour map to extract area values for each colour within each polygon
3
Calculating the time taken to complete the overlay display in map?
9
How to overlay map layers (shp and csv) in R?
18
how to overlay shapefile and raster?
1
Compare two rasters with raster overlay and replace cell value with variable
3
QGIS: raster image georeference and overlay