Filtering features in other layers of QGIS Atlas

I'm trying to use the QGIS Atlas tools to build student 'scattermaps', i.e. display the school and the students that attend that school, for 215 schools.

The schools layer is the coverage layer, and is being driven by the SCHNUM (school number) value. This is working fine, that is it is driving the pages correctly.

How, though, can I display only features from other layers, in this case the student point layer, that match the corresponding SCHNUM value for the current feature in the coverage layer?

I would also like to switch the coverage layer (schools) to 'hidden' and use the same technique to only display the current school from a duplicate schools layer.

There is a presentation available here that alludes to the use of a layer rendering rule setting using $atlasfeatureid, but I can't figure out how that works.

I also found this bug tracker page that shows this working, but again, I can't get it to work on my data:

Indeed, you need to use rule-based symbology to achieve what you want.

You need to create a rule for what you want to show, and ELSE rule for all others. 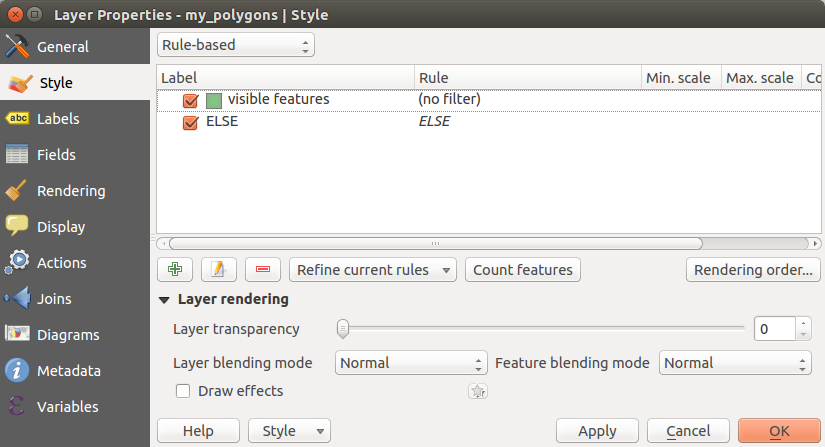 In the ELSE rule, deselect the symbol checkbox to make it invisible. 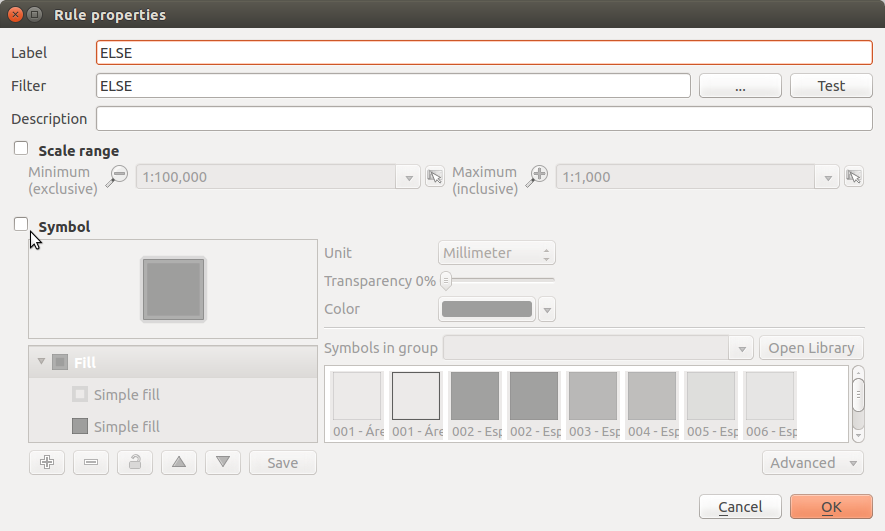 Hide other features from the coverage layer

The rule to show only the current atlas feature can be the following: 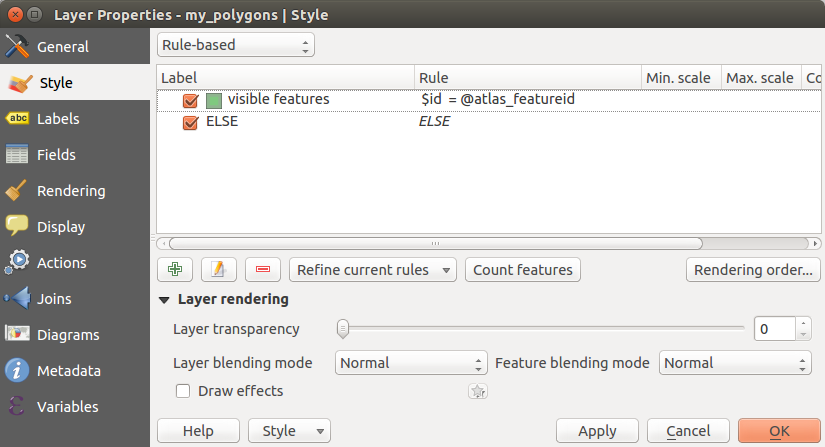 note: I believe that @atlas_featureid variable is a 2.12 syntax. I think that in 2.8.x you would need to use a function called $atlas_featureid.

The recipe is the same as before, one else rule to hide features, one to show.

For your particular question, you seem to have a shared attribute called SCHNUM. In that case the rule can be:

in your particular case:

Note: Again I think @atlas_feature variable is a "new" thing, and in 2.8.x you will need to use the function $atlas_feature 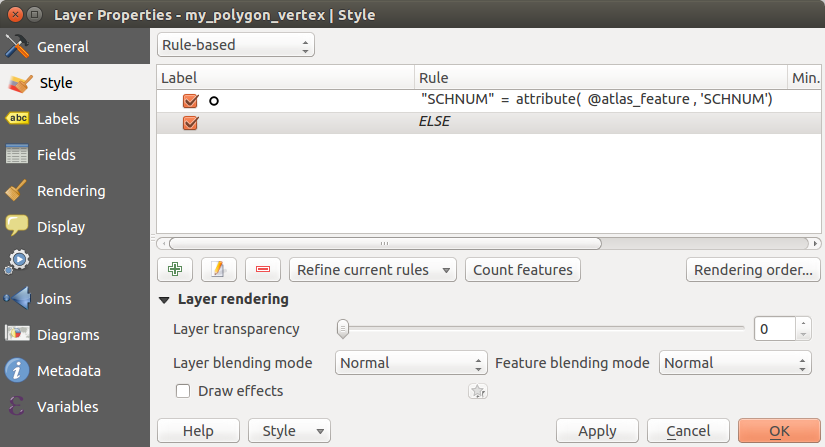 Starting from QGIS 3.16 Hannover, there is a button that allows you to view the current geometry of the atlas: 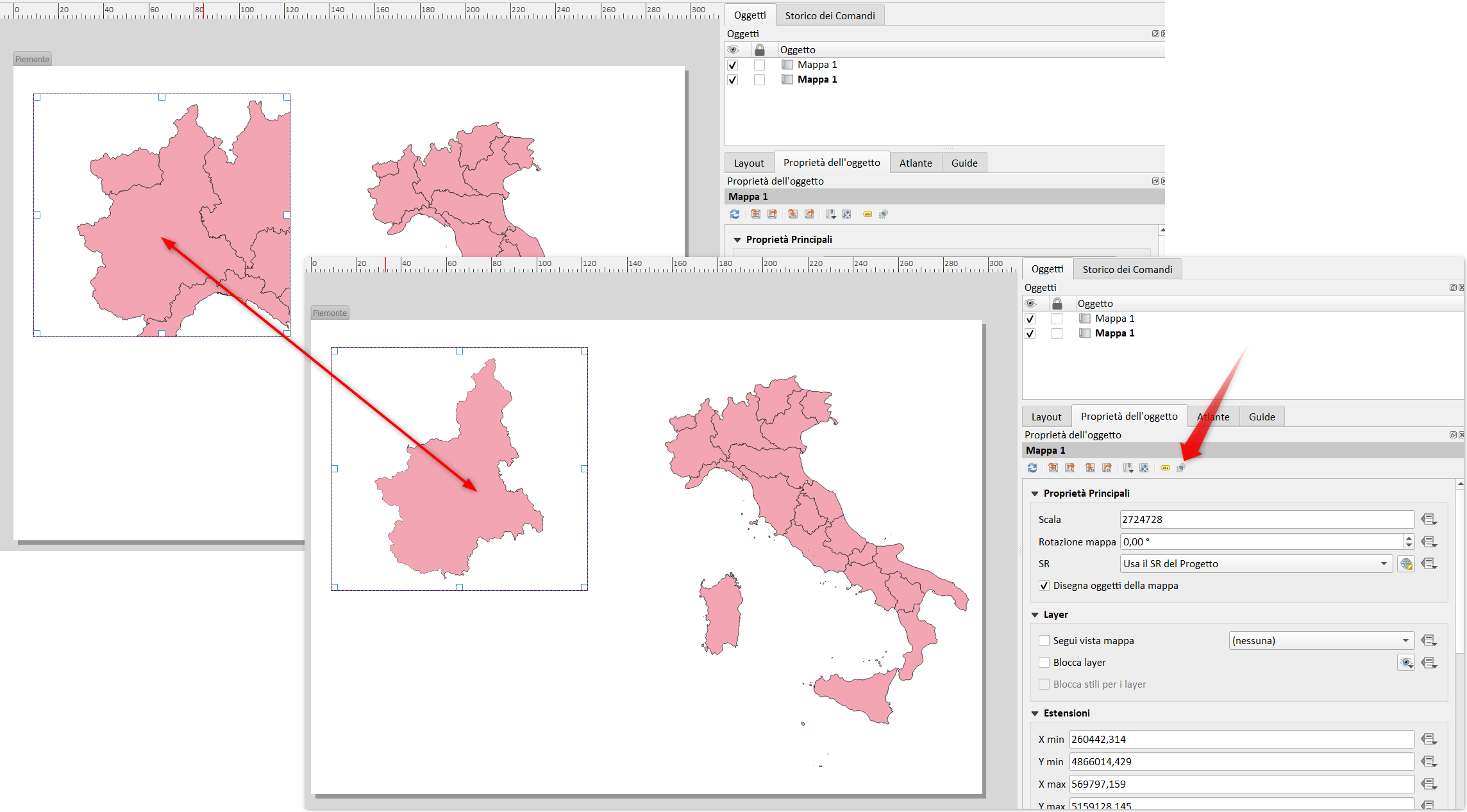 Not the answer you're looking for? Browse other questions tagged qgis layers features filter atlas or ask your own question.

0
In an atlas is it possible to cover the features that are in other AOI's and turn off labels?
9
Filtering layers in QGIS atlas
6
Show only features within current Atlas feature
4
QGIS 3.2 atlas with set of points
4
Printing centered map from a QGIS project for each point in shapefile?
2
Atlas zoom on layer outside coverage layer
3
Plot points from a Sqlite (non spatial) table as a query on the canvas instead of making a new table
4
QGIS rule based symbology for rasters in Atlas?
1
QGIS Atlas: Remove atlas page if empty
1
Altas with different numbers of page and maps for every feature
See more linked questions

6
How to use QGIS Atlas with multiple layers/files per coverage?
9
How to create an Atlas based on point attributes?
1
How to set the QGIS Atlas page extent to the bounding box of features?
1
Adding new layer to existing User Stored Display in ArcFM?
1
Building a rule engine for report generation in QGIS composer manager atlas generator; using metadata from non-coverage layers for expressions
2
How to hide labels in intersecting layers using label expressions in QGIS?
3
Displaying lines in QGIS from ST_MakeLine() not working with UPDATE, but works with CREATE TABLE
9
Filtering layers in QGIS atlas
4
Filtering layers in QGIS atlas while displaying them in the canvas
2
Filtering data using QGIS Atlas