How to automatically merge polygons sharing a common boundary, keeping all attributes from class "A" features?

Interactively I would do this in an edit session by:

Dissolve solution from How to combine adjacent polygons sharing similar trait into single polygon? doesn't work because we need to keep other attributes which differ. In other words: 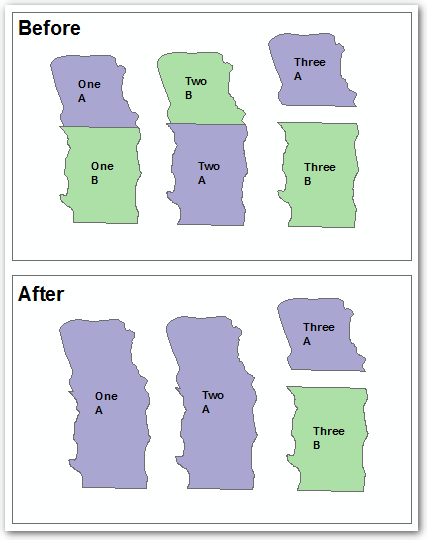 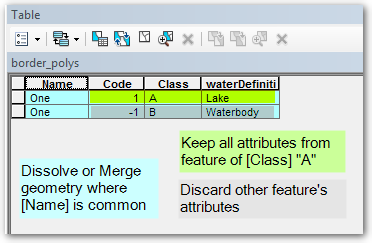 The output will have duplicate fields, Select all records where the Name and Name_1 fields contain the same values. This will be the set of all the features that touched a Class A feature and had a matching Name value. Calculate the Class field of the Target to be "A". Calculate over the Code_1 and waterDefinition_1 fields into the Code and waterDefinition fields to set these values to match the value of the touching Class A feature.

Now you can Dissolve all of the features and use all of the target fields as Dissolve fields (Not the fields ending in _1) to preserve the unique attribute cases. Uncheck the Create Multi-part feature option. If a feature was not touched by a Class A feature it will have its original attributes. Merge of these features would only occur if they were touching features that had the same attribute values that are not Class A attributes. However, all features that touched a Class A feature will now be merged together and have the Class A attributes.

Dissolve does work, just not on it's own. Spatial Join as well, but it too is insufficient on it's own. I had explored and rejected both of these earlier because of of losing wanted attributes altogether (Dissolve) or resulting nulls in the attributes I need to keep (Spatial Join). With @Richard's answer we're reoriented properly. The solution: 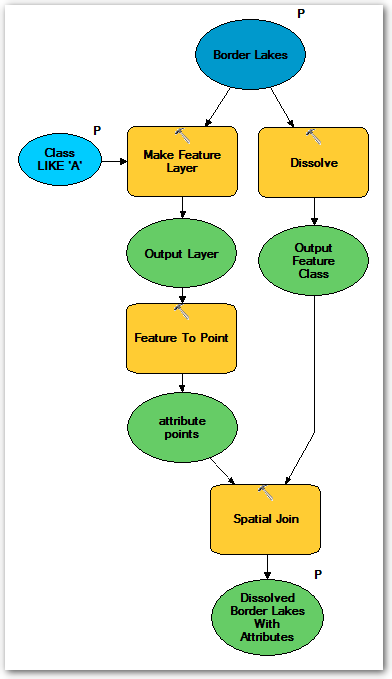 Spatial Join in step 3 is where I went wrong at first and ended up with null attributes or other unwanted combinations. I was choosing HAVE_THEIR_CENTER_IN and WITHIN. It was the interactive Spatial Join from the ArcMap table of contents, with it's different wording from the geoprocessing tool, that gave me the final clue.

I suspect it possible to use spatial join without using the point file intermediary, but wasn't successful with our data. Having something that works is good enough for now; I'll leave further optimization for others. 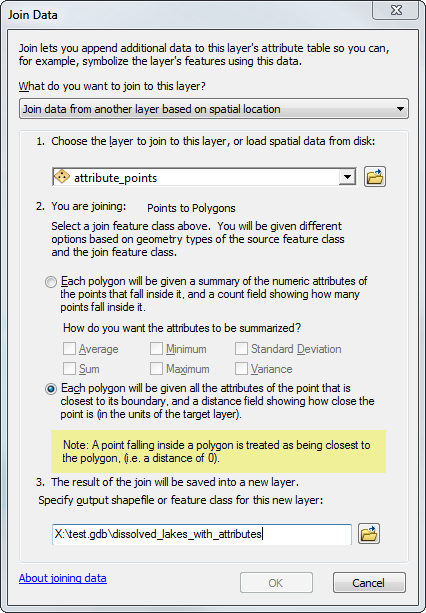 Not the answer you're looking for? Browse other questions tagged arcgis-desktop merge or ask your own question.