How to trace a line layer (road network) through points?

I have a road network (purple), Point files (green) and a beginning point (yellow).

I want to trace the point files based on the road network. Think of the points as telephone poles, but what I want is a map showing telephone lines (line shapefile). There is a numbering scheme for the "telephone poles" but it isn't great and for this instance I would just as well assume they are not numbered.

Does anyone have a solution? One that looks pretty good is just buffering the points and then clipping the road network from the buffers. But I want something more complete. It needs to be automated since there are 12,000 of the "telephone poles" 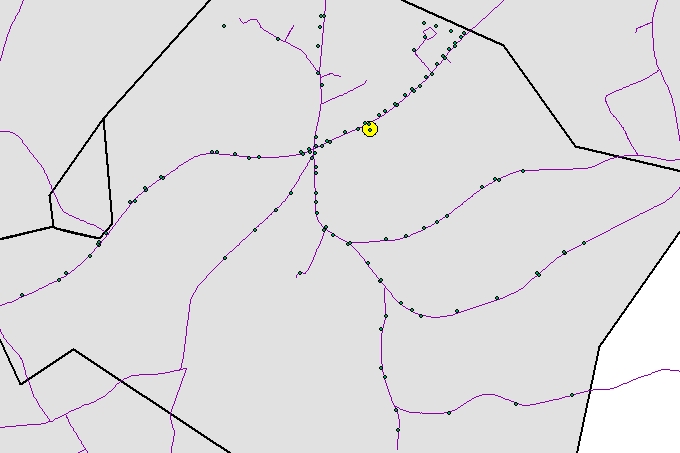 There are many ways to deal with this, but a few stand out as being general and effective. To understand this, let's enumerate a few of the problems that might have to be dealt with:

I am also adopting the stance that since you already have a polyline network (the roads), it would be advantageous to exploit it rather than connecting the pole points with a completely new polyline, which is likely not to parallel the roads very well.

These considerations suggest that the ingredients of a good solution would include a few key steps:

The union of these shortest paths would trace out the transmission network. (Indeed, step 2 is not really necessary, but it would greatly reduce the computation involved in step 3.)

Steps 1 and 3 can be carried out using a network representation (in Network Analyst) or a raster representation (in Spatial Analyst, using a CostDistance or FlowAccumulation calculation). Step 2 is a straightforward database summary: after step 1, each pole will have its road segment and distance as attributes. Find the maximum distance by road segment and select the poles attaining those maximum distances.

There are some potential problem situations:

At one point I mentioned FlowAccumulation in passing. This may surprise people: what does this problem have to do with streams and watersheds? Stare at the image for a while. Imagine the origin point as the low point on a landscape and the roads with telephone poles as traces of streams flowing toward that low point. If we can create a surface for which the roads really are the streams, then we can let a little "rain" fall at the location of each pole and flow downhill. The points that get wet are the solution we seek: they connect the poles efficiently into a network that follows the roads. An appropriate CostDistance calculation--with low nonzero impedance along the roads and extremely high but not infinite impedance off the roads--will create exactly that kind of surface. Another way to create that surface is from the Euclidean distance grid for the roads. That's perfect, except the roads are level. They have to get tilted; for this, add an extremely small multiple of the distances along the roads to the Euclidean distance grid. (The road distance still requires a CostDistance calculation, which is expensive, but this time it only needs to be carried out for road cells, rather than all grid cells, which will speed it up by orders of magnitude. That permits us to use an extremely high-resolution grid if we like, thereby avoiding possible discretization errors made with coarse grids.)

Basically following whuber's approach, I would try this:

It sounds to me like you really are looking for a Geometric Network in a geodatabase.

What if you created a geometric network where your roads would serve as your "trunk lines" and then simply add "feeder lines" that run perpendicular from your roads to your points. Then you should be able to "set and view flow direction, change analysis settings, add flags and barriers to analyses, and perform various trace tasks." (see section called "Utility Network Analyst toolbar"). Also see "About tracing on geometric networks" for more detail on other types of analysis you can do with a geometric network.

This would require a little setup, but by creating an automation process of connecting the points to the network, it should be fairly quick and easy to update as new points are added to the network.

NOTE: "Although geometric networks can be both created and edited in ArcInfo and ArcEditor, they are read-only in ArcView". (From "Building a geometric network from existing simple feature classes")

As a starter (not the complete solution).
We probably need to know data format, version and license level of your arcgis.

What I see is to utilize the road network as a linear referencing system, and then "re-number" the poles in the correct sequence.
Then you should be able to use one of several tools (I'm sure someone else's answer will define that more clearly) to create polylines from the poles.
Here is the arcgis 10 tutorial for linear referencing

Not the answer you're looking for? Browse other questions tagged arcgis-desktop telecom or ask your own question.

2
Measuring Distance from Point to Point Along a Path in ArcMap
7
Tracing up a stream network & tabulating attributes of polygons it passes through
1
Join traffic data (point) to a road network (line) - Section between two roads - ArcGIS
4
Finding upstream locations (polygons) using ArcGIS Geometric Network?
1
Remoteness Measurements or Accessibility Models in Rural Areas in Africa
0
Choosing ArcMap Network Analyst Tool
0
Is it possible to calculate Euclidean distance but by using a road network?