I'm looking for a way to vector-map Birmingham population densities by Lower Level Super Output Area (LLSOA). I have two sets of relevant data: the ONS LLSOA boundary set, and ONS estimates of population density. The LSOA boundary set is georeferenced, and assigns each area an ID. The density data has no lat/lon info. Instead, it refers to the LSOA ID number.

Does CartoDB have a relatively simple way of correlating the LSOA ID of each table? Is this simple using an SQL query, or another method?

--- Update based on rethinking the question ---

Since my overall aim is to render a density map with a colour gradation, I realised that with CartoDB, it's a polygon rendering scheme I'd need, and that I'd need to assign a numeric banding within the data table. I've done that by editing a text file and uploading it.

Given that I've been text-editing the tables in KML format, I looked for KML tags that would be useful. Ultimately I'd want to use the POLYSTYLE tags. But in advance of studying those, I just did a simple ranking using the SNIPPET tag.

With that in mind I took the highest density number and divided it by 10, then filled the SNIPPET column with those numbers. Once that was uploaded, I edited the rendering settings to assign a colour band to each level.

This gets me most of the way to my original aim, and is good enough to share with others. It's taken several hours of foooling around with text and spreadsheet editors; probably much longer than doing the merging online.

There are other boundaries I want to add in, so I'll continue with the JOIN or MERGE approach and report back with the outcome. Aside from that, other questions have come up - like how to do other sorts of renderings - which probably ought ot be set out as new queries.

In addition to @raphael 's suggestion to perform a join in SQL ( - if you want to do this perhaps this helps and this - ) you can also use the merge wizard in CartoDB. As you suspect, you can use the area code as the unique identifier to join the population density as an attribute to your shapefile.

In this example I have uploaded the following two data sets to CartoDB: 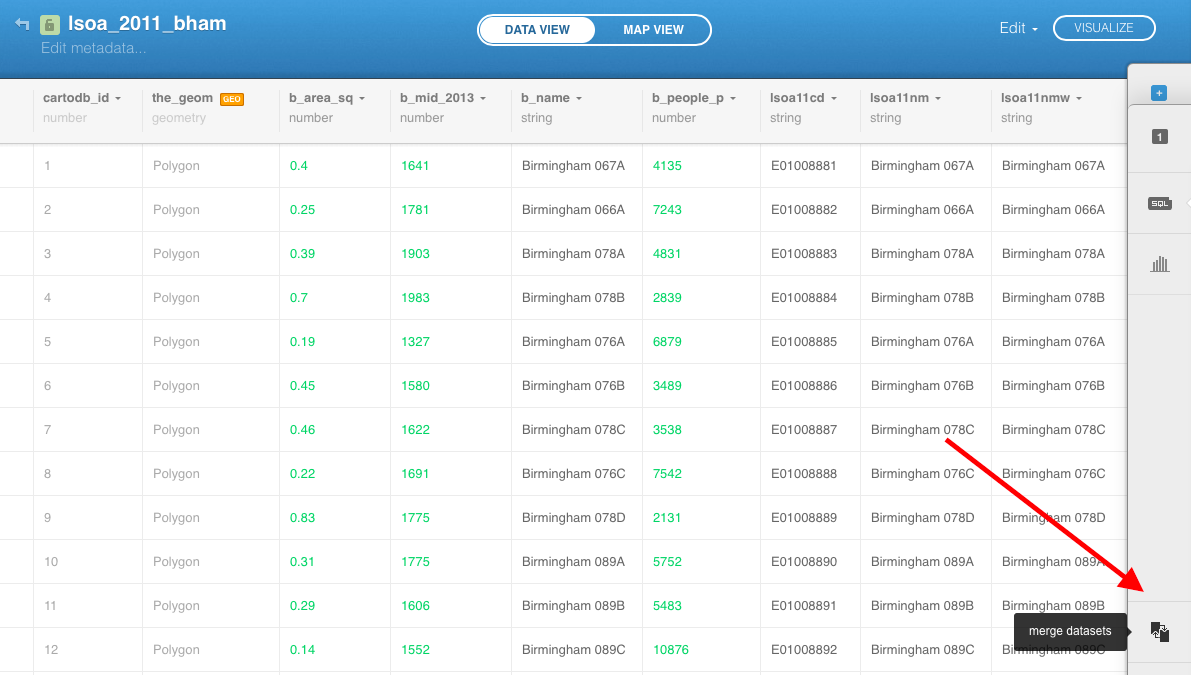 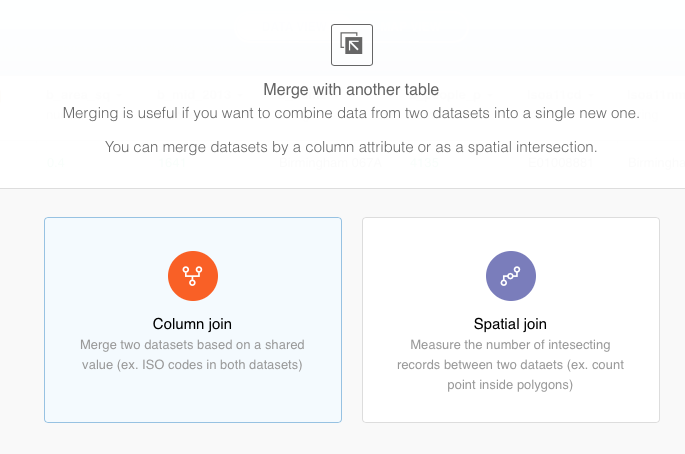 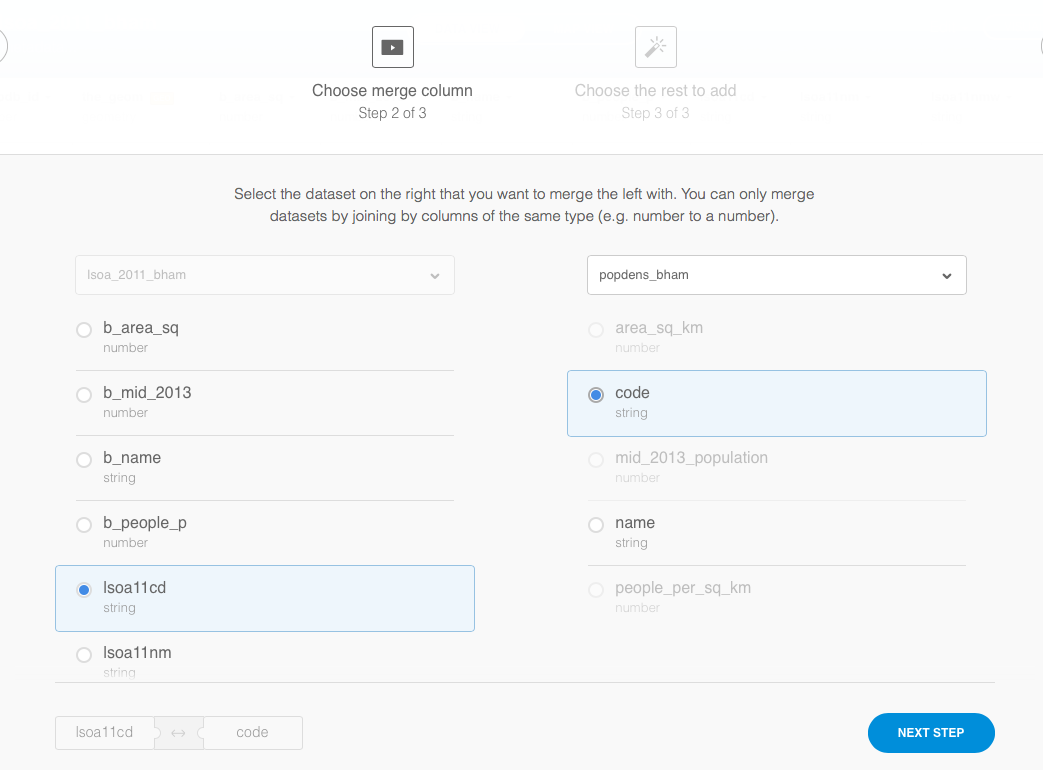 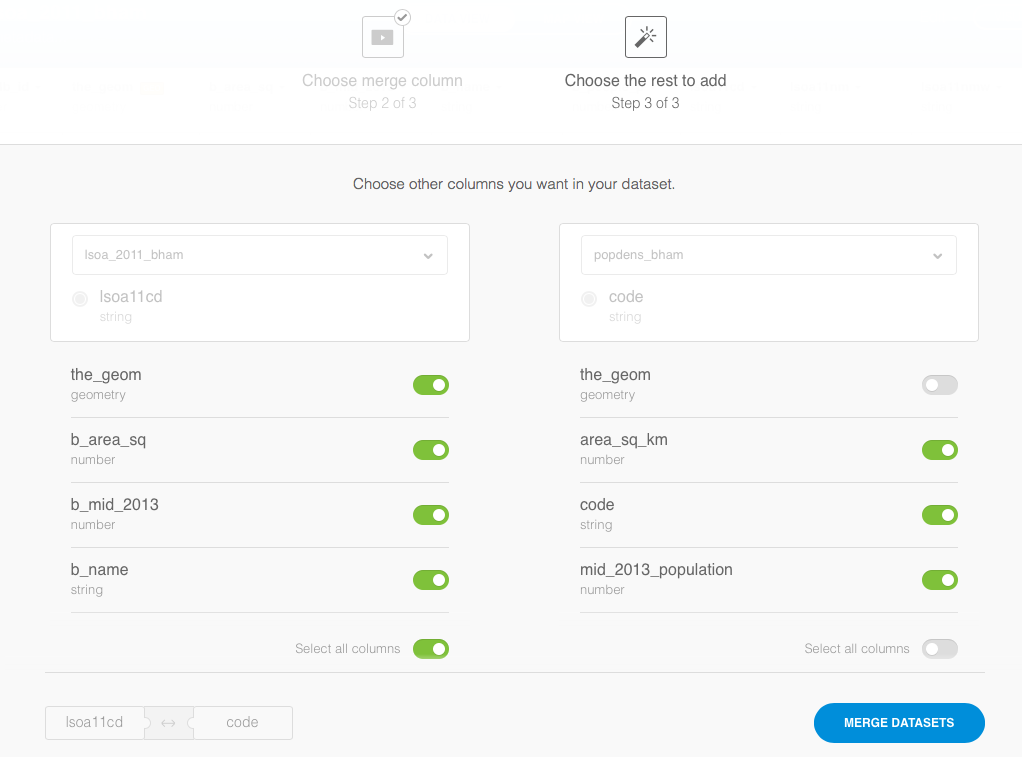 Not the answer you're looking for? Browse other questions tagged carto census united-kingdom population or ask your own question.

3
Link to another table in CartoDB infowindow

1
Loading Tiger & ACS Data Into CartoDB
3
Census Data Intersection with Unique Boundaries
2
Randomly distributed cases according to census data
1
Visualisation of "dominant" point in each location
0
Getting simplified UK boundary data?
3
How to make a fixed block of text in cartodb instead of infowindows?
4
Understanding LSOA and MSOA boundaries (UK)?
1
ONS Open Geography Portal API Usage for boundaries
0
Raster smoothing - assigning each raster the average value of its neighbors
1
Converting gray band from dataset to RGB with rasterio for population density