Average value of polygons within a set distance from a point

I have two vector layers: one polygon and one point layer. The polygon layer has a value from 1 to 10. I am trying to find the average value for all polygons within or partly within a 1-mile radius of each of the points in the points layer. What would be the best way to go about this?

I am using ArcGIS 10.2 and I have access to the Spatial Analyst extension.

Use the Buffer Tool with your points and then use the Spatial Join tool. For the Spatial Join make the point buffers the target and the polygons the join features with the One To One option and change the merge property of the column with the values you want averaged in the field list to use Mean instead of Sum (or add a new field to the field list if you want both the sum of the values and the mean in separate fields). The point buffers and Spatial Join output will retain the FID of the original points in a field, so you can transfer the Mean from the Spatial Join output into the original points using a standard Join and the Field Calculator.

You should be able to do this using a spatial join of the Polygons to your Points. Set the Join option to JOIN_ONE_TO_ONE and in the Field Mappings, right click on your value field from the Polygons and set the merge rule to Mean. For the Search Distance, set that to 1 mile. That should give you the average of all polygons within 1 mile of the points (see screenshot below). 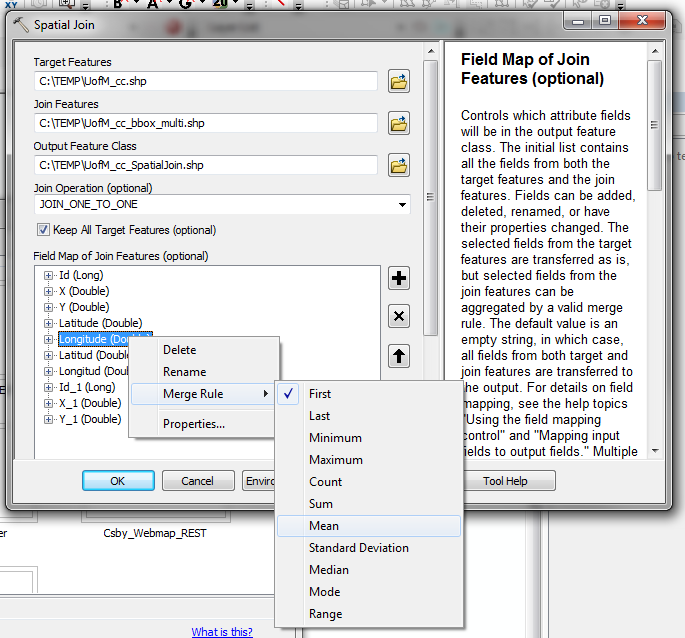 Not the answer you're looking for? Browse other questions tagged arcgis-desktop arcgis-10.2 distance spatial-analyst proximity or ask your own question.