How precise are overpass times of sun-synchronous satellites?

sun-synchronous satellites, as their name say, acquire scenes at the same solar time of the day when they pass over the same location. According to this site, sun-synchronicity is achieved by taking advantage of nodal regression and launching a satellite into an orbit where the nodal regression nearly exactly cancels out the daily change in the position of the sun over any point on earth, caused by the earth's orbit around the sun. This turns out to be, depending on the altitude of the satellite, about 95 to 100 degrees inclination.

The local time of descending node (or overpass time) is usually mentioned on the satellite descriptive documents. I would like to know how precise the solar time provided in those descriptive documents actually is and how to improve this precision based on potentially effecting parameters (altitude, latitude, longitude, day of year, age of the satellite). My understanding is that the main difference comes from local solar time vs mean solar time (see equation of time, up to 18 minutes), but I am seeking an order of magnitude of the other possible sources of dicrepancies between the announced overpass time and the actual local solar anywhere in the world.

I have several satellites in mind (the Sentinel's, MODIS, Landsat...), but I am particularly interested in PROBA-V. PROBA-V flies at an altitude of 820 km in a sun-synchronous orbit with a local overpass time at launch of 10:45 h. Because the satellite has no onboard propellant, the overpass times are expected to gradually differ from the at launch value. Examples of drift correction for satellites like Sentinel-2 are also welcome.

I am not a specialist of orbits, but I'll try to answer. Given a theoretical overpass time on a sun synchronous orbit, the exact one is not that easy to determine, as it depends on a lot of factors.

So the only way to predict accurately the overpass time is to use an orbit simulator, using as input the two line elements bulletins that are available at Norad for instance. https://celestrak.com/NORAD/elements/

Based on the first answer and this post, I tried to put some numbers on the different parameters that affect the local solar time of overpass of a sun-synchronous satellite:

The sun-synchronous orbits need to be adjusted from time to time. For example, every two year in the case of MODIS. In the case of PROBA-V, the drift is not corrected. As can be seen in the PROBA-V product user manual v1.3, uncorrected drift result in a change of overpass time of approximately half an hour over 3.5 year. I guess that this drift is maintained within approximately 10 minutes when corrections are applied. 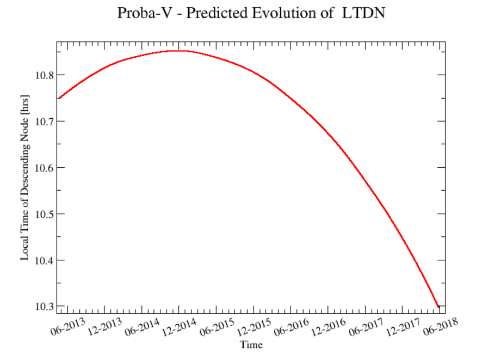 Twelve noon local solar time (LST) is defined as when the sun is highest in the sky. Local time (LT) usually varies from LST because of the eccentricity of the Earth's orbit. The local solar time is in the range of +/- 15 minutes compared with the mean solar time. Illustration from Wikipedia below. 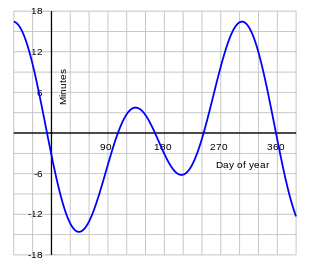 sun-synchronicity is achieved at nadir. Due to the large swath of PROBA-V, the observed location have a different local time. Here are some examples derived with the NOAA solar position calculator with the PROBA-V swath of ~2200 km. I (roughly) looked at the footprint at those latitudes.

With Sentinel-2 and its relatively smaller swath (290 km), the difference would range in +/- 4 minutes at the equator.

Not the answer you're looking for? Browse other questions tagged remote-sensing satellite sentinel-2 proba-v or ask your own question.

1
How do I calculate ECEF X,Y,Z velocities for GPS if I have no satellites
1
Empty raster returned after GRASS i.atcorr with Landsat8 data
2
How does my phone get an accurate reference time for calculating distance from GPS satellites?
1
How precise is a volumetric calculation made with satellite stereo par imagery?
0
How are ice, snow, and clouds differentiated in data from remote sensing instruments?
1
How are satellite images mapped to terrain coordinates so precisely?
0
Are Landsat satellites exactly sun-synchronous?
0
Satellite sun-synchronous orbits and local acquisition time