How to compute max and min coordinates for multiple polygons?

I would like to calculate the maximum, median and minimum latidudinal coordinates for a large set of polygons, using QGIS or R. So the highest and lowest points reached by each polygon across a latidudinal range. Central coords are easy to do, but converting the polygons to points, and using a distance matrix in QGIS crashes my computer. Is there a more effecient way to do this?

Its been asked in various guises here, but either 1. Unclear 2. outdated I think version wise or 3. crashes on my PC as I have about 2000 polygons.

This essentially outputs a bounding box layer for each feature (if you select the option) with fields containing the coordinates of the max, centre and min of X and Y along with few other statistics: 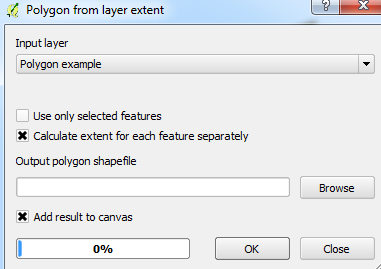 You mention "latitude range" but don't specify if your coordinates are in a projected coordinate system, if they are you need to ensure you unproject and classify by latitude (not just Y) if that is the case.

I would highly recommend you check out dplyr for the final summarizing, R's built-in tools are very powerful but tiresome in hindsight. Unfortunately with sp you need to manually convert between arrays of coordinates and data.frame form pretty routinely to get these kinds of answers, but it's all doable.

Finally, if this is actually what you are after it won't take any time at all, as long as your virtual memory resources are a match for the data set you have, to read it all in at once and do the job in one step like this.

In QGIS, you can use expressions to add fields using the Field Calculator

For center coordinates, you can use

Not the answer you're looking for? Browse other questions tagged qgis r or ask your own question.