When buffering a point, the result is inaccurate to the basemap.

I specify a 200 foot buffer around a point however the resulting buffer has a distance from the point of about 260 feet. Both the measure distance tool and the scale bar on the layout view agree that the 200 foot buffer is indeed greater than 200 feet.

The .MXD uses a coordinate system of WGS84 Web Mercator Auxiliary Sphere as I am using some of ESRIs available online datasets, however I have added other data in different projections.

I have tried re-projecting both my location and the resulting buffer however this only results in moving the shapefiles relative to my basemap, with no resultant change is size.

How can I correct this issue?

Note: The displayed NAD27 Point is positioned accurately to the WGS84 Web Mercator basemap. (projected "on the fly" as it was added to the .MXD)

This happens because the buffer is in NAD27 as it is applied to the point. the basemap layer is in WGS Web Mercator Auxiliary Sphere and the measure distance tool is measuring the distance on the basemap. If I change the map properties to display in NAD27 I encounter distortion in the effect of oblation of my once round buffers. I also encounter a "stretched" appearance to the basemap and the shapefiles (excluding points of course). This does however plot the buffer boundaries in the correct location with correct distances (verified with on-the-ground references in the basemap) - but they are ovals.

Try changing the buffer method from Planar to Geodesic Arguably, in such small scale features this shouldn't change much, but stranger things have happened before.

Here's a case where I buffered some points in a geographic CRS with a planar buffer of 250 meters and displayed on a projected CRS. Using a geodesic method solved this issue for me. 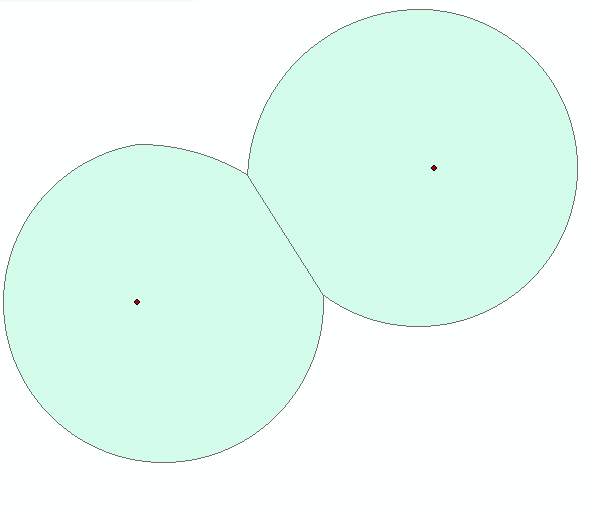 When adding XY data in NAD27 Decimal Degree Coordinates (from a .csv file

Now, 100 foot buffers will measure to be 100 feet in the measure tool, and the ground truthing distances will line up in the aerial imagery.

Buffer tool used on NAD27 data point generates buffer in NAD27 GCS. This GCS has different distortion than the basemap data layer presented in a different coordinate system, therefor, yielding a buffer that appears to be inaccurate. In fact, the buffer is accurate but will only accurately correlate with NAD27 basemap imagery.

Not the answer you're looking for? Browse other questions tagged arcgis-desktop arcgis-10.2 coordinate-system buffer or ask your own question.

35
What is approximate error of Pythagorean Theorem vs. Haversine Formula in measuring distances on sphere at various scales?
7
Trying to convert coordinates from WGS84 Web Mercator Auxiliary Sphere to WGS84
1
Converting datum?
1
Why the Select By Location analysis calculates distance in a wrong way?
1
Find true projection of feature class?
1
How to change a buffer's shape?