How to combine two polyline shapefile together

Here is my question

I want to * Combine these two shapefile * Transform it into polygons which represent each divisions.

But I have failed to combine two layer using vector -> Data manager tool -> merge or dissolve with stats(the inner boundaries are consist of 48 line with the same User ID: 0)

Here is my two shapefiles:
A was in black color , B is in green color.

I have already figured it out using MMQGIS.
But I don't know how to transform it into polygons.
If you are interested, please check this question I have asked and offer some valuable advices.

The figure above seems to be right.

The result shown on the figure doesn't show the correct boundaries.

Use the MMQGIS plugin to Combine -> Merge Layers, selecting your two polyline layers A and B as the inputs, and save the output as Layer C. Then use Vector -> Geometry Tools -> Lines to Polygons on Layer C and you will have your inner boundaries as polygons. If this tool gives odd results, use the Polygonize tool instead (see below). 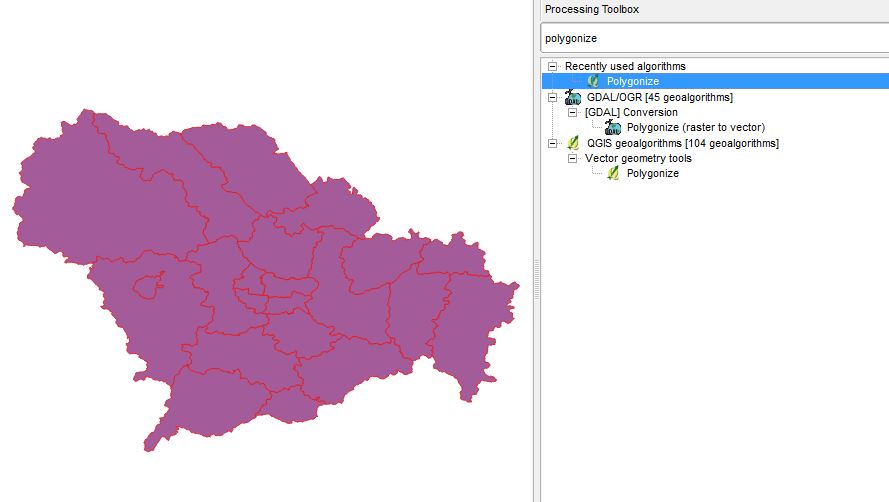 In QGIS merge the two polyline layers into one polyline shape file. Use the GRASS plug-in to create polygons from borders, unfortunately GRASS plug-in is not available in QGIS 2.8, so upgrade to QGIS 2.12 or use standalone GRASS (I give the GRASS command name in brackets):

Not the answer you're looking for? Browse other questions tagged qgis shapefile polygon vector line or ask your own question.

3
Decompose the polygon with polyline inside

3
Merge and export two layers that utilize blending modes
1
Need help making polygons from lines in QGIS
2
Using Python to convert line shapefile to raster, value=total length of lines within cell
2
How to calculate the intersection within the grid and saving to the grid
3
Decompose the polygon with polyline inside
2
Merging two separate shapefiles into one shapefile
2
How to delete parts of a multipolygon inside an sf-object in R?
2
Merging two Polygon objects of the same layers, snapping them together into one?