Clipping a shapefile in QGIS that has user defined projections

I have two shapefiles for Rwanda which have user defined projections. I am trying to clip the geology shapefile so that it has the same spatial extent as the districts shapefile. When I clip, I do get a saved file, but there are no data in it, the attribute table is empty as well.

While geology file has the coordinate system:

I am having trouble to reproject them so that they gave the same coordinate system but if I do so, I am not able to view them together.

I am not expert in qgis, but I would create a new empty shapefile specifying the same projections of the geology shapefile, then copy the districts geometries into that new shapefile and try clipping again the geology with the new districts in the same CRS. Also, when you do this copy and paste operation (hope it's possible in qgis but I guess it is), make sure the CRS of your project is set to that of the geology and the new shapefile, or you still will likely have problems.

This task is a bit error-prone, because your CRS look similar. So QGIS might take the wrong one when adding a shapefile to the canvas.

Check the assigned custom CRS and layer extent for all layers in every step. The geology shapefile has to be reprojected to the district CRS, and the reprojected geology has to overlap the original district shapefile when OTF is switched OFF. You better remove the layers with the geology CRS before starting the clipping.

Your extents seem to look reasonable, with the geology layer (red) larger than the district layer (blue) (OTF still on): 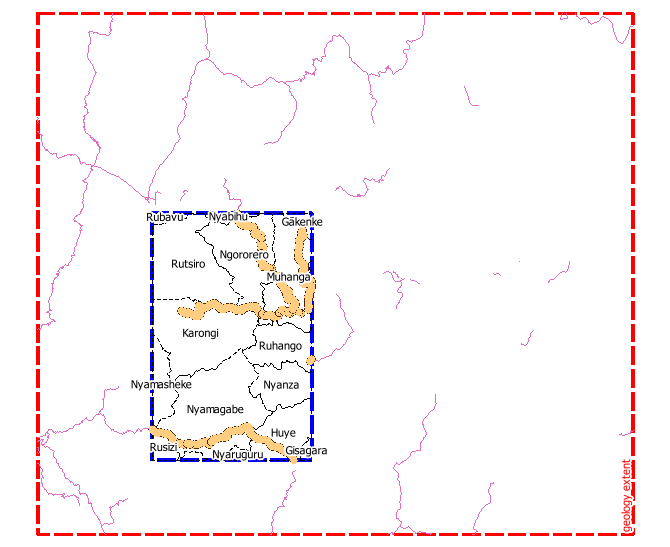 The clipping layer has to be a polygon. You might use Vector -> Resaerch Tools -> Polygon from Layer Extent to get a good extent polygon. Clipping might fail if there is a topology error in the clipping layer you use.

Input layer is the reprojected geology, and Clipping layer the extent layer.

In my example, I used a highway layer downloaded from Openstreetmap.

Not the answer you're looking for? Browse other questions tagged qgis shapefile clip or ask your own question.

4
Projecting shp from GK3 to UTM32 with BeTA2007
2
Creating TAB with custom CRS using QGIS?
2
Question about BNG coordinate systems
4
How do I make this into a working CRS in ArcGIS?
1
User defined Coordinate Reference System (CRS) in QGIS is not located where expected?
5
QGIS doesn't create the correct projections when creating new shp files
1
Transforming map with "custom" CRS to WGS84?