How can I display this polygon in Google Maps, properly

NOTE: this question is sorta like a follow-on question to this original GIS Question I asked. In that question, the main suggestion was that I was trying to show two polys. Now, I'm asking about a SINGLE poly.

I have the following GEOGRPAHY of Los Angeles in my Sql Server 2008 :- 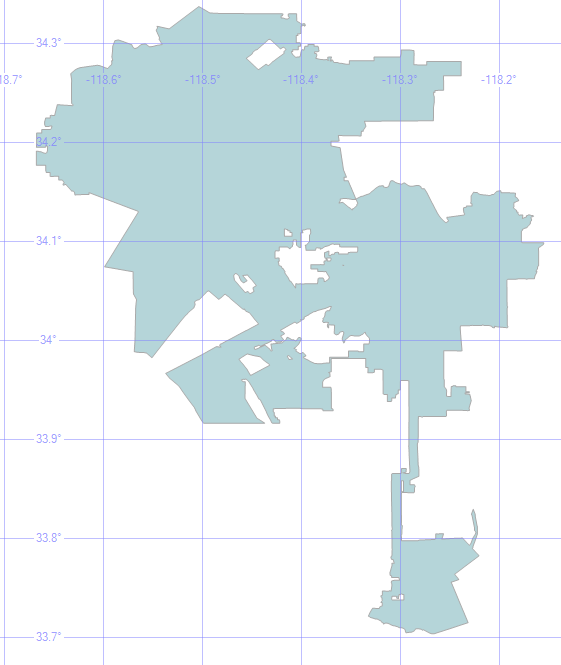 Sql script to repo it (or in RAW sql format)

Now when I just try and render this out, It now looks like this (NOTE: this is different, but still not correct .. compared to my previous GIS Question). 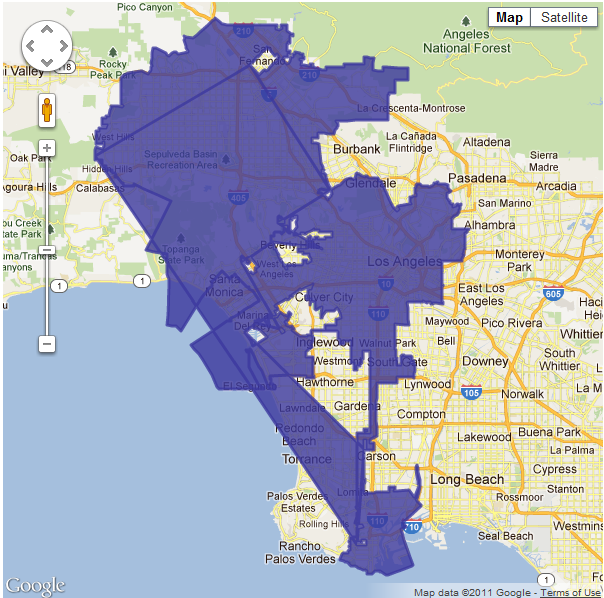 Now, in the previous question people were suggesting that the previous data was a MULTIPOLYGON so there was some bad stuff I must have been doing, trying to render out holes in polys.

This time, this is a single polygon. So i'm assuming the hole theory still doesn't work. Now, I understand that by looking at this image, there's a number of holes ... but the Well Known Text data which Sql Server gives me is a POLYGON which to me means .. one single shape. So i'm not sure how I can fix this :(

This is why i'm asking the a similar question to my previous one.

Can anyone help? Can they see the data I've posted and see what happens in other systems? (I don't have any other software besides Sql Server 2008).

Maybe I need to extract all my data from Sql Server 2008 .. and clean it up (whatever that means) through another system. For example. If Sql Server is saying that the shape of Los Angeles is a single Polygon .. but when cleaned up .. it's actually 7 Polygons .. and then those shapes then get rendered correctly .. then we have a solution!

Can -anyone- render this shape onto a Google map? 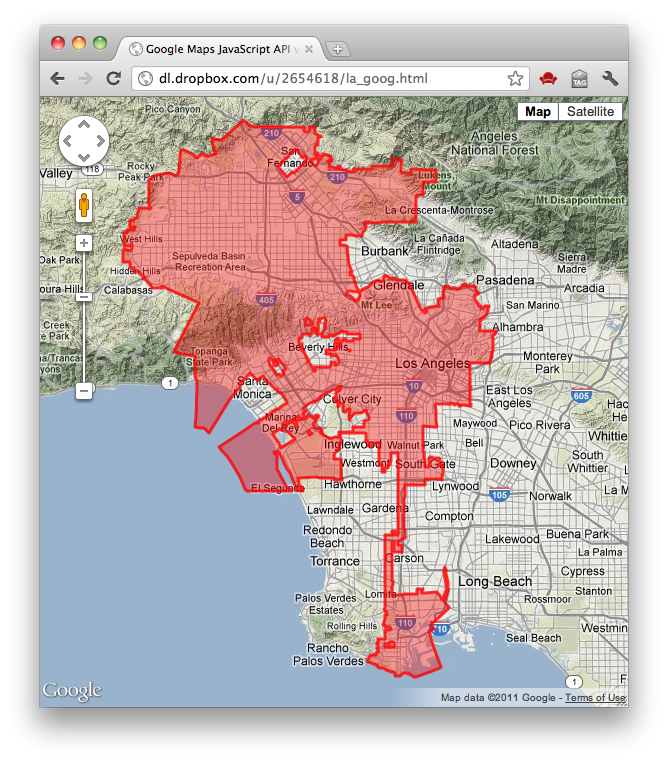 As I said in my comment, I reformatted your raw data. I did this with some python and a little hand-jamming. The resulting JSON is here: http://dl.dropbox.com/u/2654618/la_geom.json That's the Esri JSON format for a polygon. The link above converts the geometry from the Esri JSON format to the Google format, which is a two dimensional array.

It seems like there's a problem converting the response from SQL Server to the two dimensional array that Google expects. I would look at your code doing that conversion.

I know this has already been answered, but an easier solution I found was to actually use the javascript toolkit called OpenLayers and export the shape from Sql Server as Well Known Text .. and then use OpenLayers to display that WKT data.

this implied that my javascript code using the Google Maps API was bad and/or my code to export the json points was bad.

Not the answer you're looking for? Browse other questions tagged google-maps polygon sql-server rendering or ask your own question.

15
How can I fix my complex Polygons so they show correctly in Google Maps?
1
SQL Server to Google Maps

15
How can I fix my complex Polygons so they show correctly in Google Maps?
2
How can I transform some KML data to Sql Server 2008 using FME?
4
Shape looks like big Square in SQL Server 2008
5
Detecting invalid WKT in text column in SQL Server
1
OpenLayers with MVC and SQL Server
1
SQL Server to Google Maps
1
Can a self-intersecting banana polygon be made OGC-compliant in an Azure SQL Database using spatial functions?