I'm trying to run a loop based on a SearchCursor that selects layers from an input polygon and polyline. I want to select a feature from the polygon to use as a mask for running Euclidean Allocation on selected lines within the polygon feature. The goal is to have multiple areas of Euclidean Allocation run on a subset of polylines, each masked by a corresponding polygon.

Here's my original code. Note that this function is part of a much larger, otherwise functional script.

The input parameters for the three functions below are inline = a polyline feature class, inpoly = a polygon feature class, and valfield = a single field which corresponds to both inline and inpoly: i.e., each value of valfield = x in inline corresponds to lines that fall within inpoly features of the same value. All of these parameters are derived from in-memory feature classes fed in by earlier functions in the script--they're not located directly on disk.

When I run this code I get this error:

I've tried several variations, including using arcpy.env.mask = "SHAPE@", to no avail. I also tried saving the poly layer to a real file on disk, both as a feature class and a rasterized version. In all cases I get the same "Error in accessing environment" message when trying to apply the mask.

Does anyone have a solution? I'm using ArcGIS 10.1 with an Advanced License and Python 2.7 on Windows 7. (Any other suggestions on improving code are welcome.)

My previous answer was rushed, so I’d like to try again, now that I’ve had some time to reconsider.

If each polygon intersects only one line, the simplest strategy is an Intersect:

If multiple lines intersect each polygon, then an interpolator-type tool is needed to create value-areas around the lines. The major issue is that none of the standard interpolators (IDW, Spline, EBK, etc.) take lines as inputs, only points. I’m guessing that’s why Euclidian Allocation was used, because it takes lines as inputs and performs an interpolation-like operation. After playing with some mock data, I also discovered that Euclidian Allocation behaves badly (for reasons unknown to me) with line-file inputs covering larger areas. I assume this is also why masks were used to make the area smaller, instead of running the Euclidean Allocation tool all in one go.

While the original approach might work, but it’s likely pretty slow, because it runs Euclidian Allocation again and again for every polygon-group. There might also be trouble if any polygons overlap. Merge doesn’t have conflict resolution if overlapping areas have different values, as calculated by the interpolator. Finally, running an interpolator inside of a mask rather than globally means that it lacks awareness of nearby neighbors, which has notable effects at the borders. Some of these effects might be desired, but I would take a different approach to solve this problem.

If lines are the major stumbling block, then my first step would be to make points out of lines. There are multiple ways to accomplish this, but I used Densify + Create Points from Vertices. Other methods are discussed in following link:

Note: no loops, no masks, no make feature layers, no merge, no cursors, no set comprehensions, and no conflicts with overlapping areas, all the while incorporating awareness of neighbors. And, you can substitute ANY interpolator method in the place of Euclidian Allocation.

Here’s a graphic of my output with Euclidian Allocation used as the interpolator. Pay attention especially to the handling of overlapping polygons, and the influence of nearby areas. 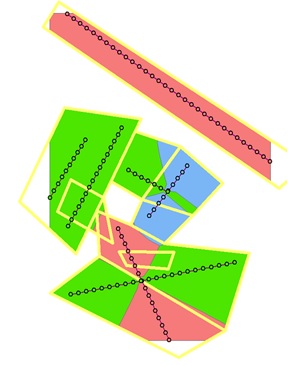 This might not be your entire problem, but MakeFeatureLayer doesn't return the layer name - you've already provided it. I don't know that it has a defined return value, so you're trying to set the mask environment variable to an unknown (from our perspective) value. Instead, you want to set it to the layer name, so change that line to arcpy.env.mask = lyr. That might not be the only issue if it's telling you it can't access the mask environment variable, but start there.

This problem would be clearer if we could get a sense of your spatial problem, not just code. What are you trying to get arcgis to do? With only lines and polygons, I have the sense that you're probably using the wrong tools for the job.

Euclidean allocation usually takes rasters, but why do you even need rasters here with lines and polygons? With lines and polygons, you should probably be using clip, spatial select, or intersect, and not bother with masks. The intersect tool with a join might eliminate the need for this entire function, but I can't say because you haven't articulated your spatial problem.

Merge tool is incorrectly applied. Merge is used to combine two datasets of the same type. You're combining a python list with a... I'm not sure what because "polyeucal" doesn't even exist before you call it with Merge. Even if "polyeucal" was a real feature class, you still can't use Merge to combine it with a python list. That's more of a field calculator operation.

I think maybe you should take a step back and get a better understanding of some fundamental arcgis tools to solve this problem. Here are some helpful links:

Not the answer you're looking for? Browse other questions tagged arcpy arcgis-10.1 cursor masking environment-variable or ask your own question.

2
Error when creating insert cursor in ArcPy?
1
Trying to modify records from one shapefile to another gives Error 999999?
1
Updating records in a table using GetCount and an Update Cursor
2
AttributeError: 'unicode' object has no attribute '_arc_object' from arcpy.mapping.ListLayers?
1
Looping through records to create ArcGIS reports
0
Multiple rename shapefiles and feature classes in python
1
Getting an IOError in Arcpy
2
keep getting error while trying to insert row using insert-cursor
1
Displaying attribute field value in TextElement gives AttributeError: 'list' object has no attribute 'text'?
1
Creating tfb file in Python Toolbox?