All available background tiles I know about on the internet (OpenLayers, Bing, Google) are tilted. See a random example below from OpenLayers (you can see the east side of the buildings): 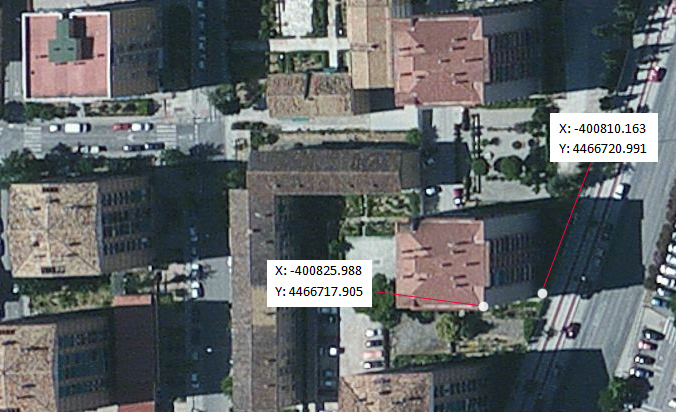 In essence, when you move the mouse from left to right along the same building, the values of the XY coordinates change, how is that?, should not the coordinates remain the same while you are on the same 2-D position?. Obviously OpenLayers does not correct that, neither the others, am I right?

Is there any way of taking this effect into account? Basically what I want to do is overlapping a true vertical digital terrain model (DEM) with aerial tiles on top. Should I worry about this distorsion?

What you see if the effect of the camera's central projection (the image is projected through the camera's focal point). This means that there is a radial distortion where protruding objects in the images appear to lean away from the center. This is direct effect of object height and the distance from image nadir (center).

The production of so-called "true orthos", where this is corrected for, is possible, but demanding. First, you would need a detailed 3D surface model of any building or object as a basis for the orthorectification, instead of a terrain model as is used here. Secondly, you will need aerial images of the area from different angles, so that you will have imagery of the "blind zone" behind the building. If the image georeferencing, the surface model and teh image mosaicing process are good enough, the result will be an orthorectified image without any building distortions.

Can it be done on any existing orthoimages? Not without leaving gaping holes in the blind zones behind the buildings/objects.

Not the answer you're looking for? Browse other questions tagged tiles orthorectification or ask your own question.

6
What tile/tiling strategy should I use with GeoNode/GeoServer?
4
Cache tiles for offline use of Google/Bing aerial maps