How to assign polygon attributes to grid cells using centroids in QGIS?

I am relatively new using QGIS.

Unfortunately I can´t figure out the following yet. I have two polygon shapefiles, one is a grid I have created using QGIS 2.12.3-Lyon (Creat graticule) and the second represents native communities´ lands. I want to assign to each graticule´s cell the name and attributes of the corresponding overlapping community. Some cells overlap with more than one communal land. In these cases I want to assign the name of the community that overlaps with the cell centroid.

Given 2 polygon layers. The features of the first one should receive the attributes of this feature of the second one, which has the largest overlap area.

The following Python script loops over both feature sets (brute force). If there is an overlap, it assignes the attributes if the overlap area is larger than the previous.

Spatial indexing and preselection with spatial filtering may enhance the execution speed. 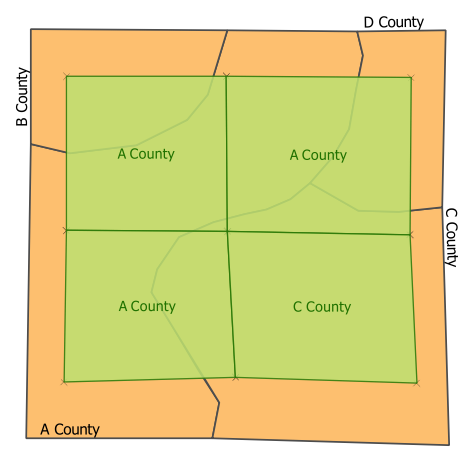 Not the answer you're looking for? Browse other questions tagged qgis fields-attributes grids-graticules centroids or ask your own question.