Projecting attribute from one polygon layer to another in QGIS?

I have 2 polygon layers which can be found here. The two layers are overlapping. The first contains a map of the German counties in 1928 and the second the counties how they are in 2014.

The 2014 layer contains information about the population (called Bev in the dataset). Is it possible to project the population attribute from the one polygon layer to the other?

To be a bit more specific:

If this works, is there also a way to do it when the layer with the information has in a specific area only 1 county but there are 2 counties in the other layer? In this case I would like to split the population proportional to the size of the county.

If you really want to get number values based on ratio of polygon area overlap between layers (L1 = counties_2014, L2 = german empire 1928):

If you done all well you should get about 77 million people distributed based on L2 counties area out of 81 million in L1. 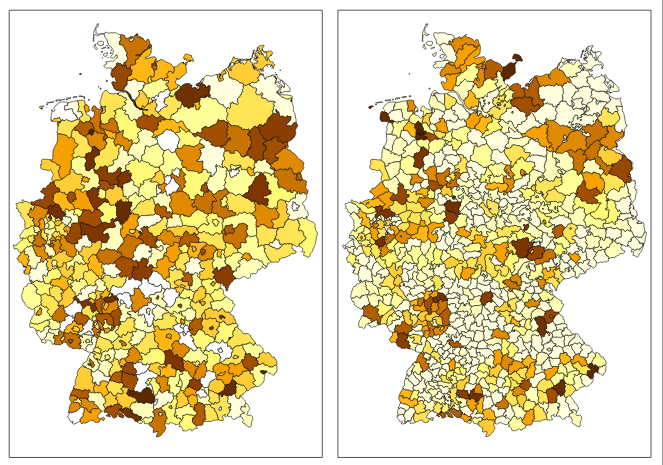 If I understand your question correctly, this might solve your first question. I did a quick test and the following method seems to work but it is worth taking a closer look to verify if it is correct.

Check to see if the output layer is correct.

If possible run it via the processing toolbox in qgis (don't have to save each layer but instead save it as a temporary layer).

Not exactly sure what your second question entails. could you elaborate?

8
Calculating area weighted average of attribute in one layer by shape in another using ArcGIS for Desktop?
3
GeoPandas cumulative value sum for intersecting polygons
2
Getting information from one layer in attribute table of another layer

8
How to add attributes in proportion to intersecting area from another layer
1
how do I join spatially polygons to polygons, creating new rows as required?
2
QGIS color polygon according to points
4
Calculating polygon attribute based on intersection with grid in QGIS
0
Clipping a polygon based on feature from overlapping polygon QGIS
4
Listing name of overlapping polygon in QGIS