How to create a line with all attribute information of the original GPX points?

I am trying to make a shapefile line contain all the data that the GPX file has.

So i load the gpx file into Qgis, (prompts me for tracks, waypoints, trackpoints, routes, etc)

The conversion to shapefile goes well when saving each gpx layer separately, ... so lets say i have Shapefile.line ( no attributes ) and Shapefile.point ( full attribute table ) . How can i import the data from .point into . line ?

I have tried to merge them, but had no success.

I have tried the plugin mentioned and have gotten some results, but the resulting line shapefile did not contain any of the information in the attribute table.

( im working on a road, i want my shapefile to appear as a line but contain attribute table information from trackpoint shapefile, both shapefiles were generated by the same GPX file )

Here is a screenshot of both attribute tables, i would like C Mainline to contain all the data from Mainline points 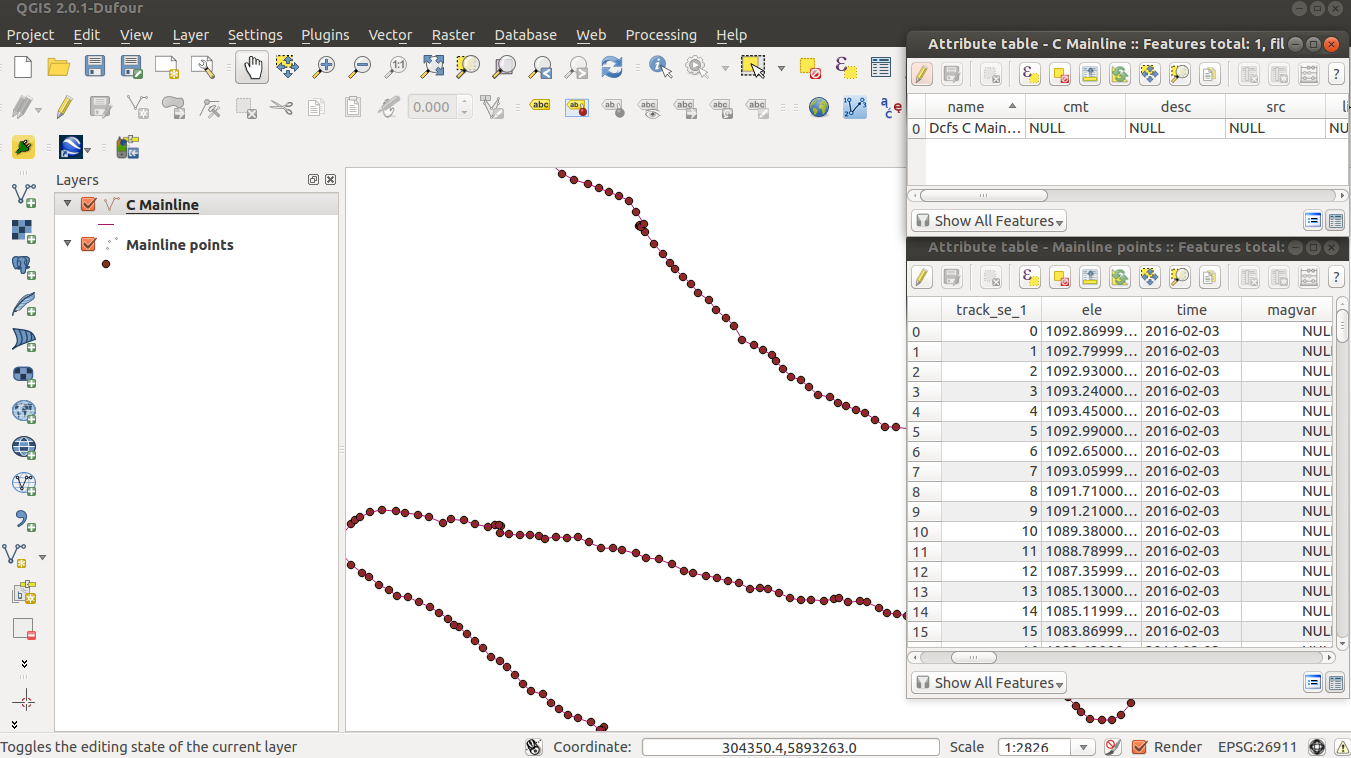 The typical GIS way of doing this is using a prebuilt tool or script to convert point layer data to a line layer. Some key web search phrases you may use to find these tools or scripts are "covert points to lines" or "connect the dots". Here is one plug-in you may try:

I'm afraid you are expecting too much. The point data has attributes for every point (coordinates, time, elevation, speed etc), one row for every point.

It only works the other way round: You can add line attributes to point data. But not vice versa.

Not the answer you're looking for? Browse other questions tagged qgis merge table or ask your own question.

0
Why does a track point layer attribute table have no positional information?
1
Copy/ Paste from spatial attribute tables into non-spatial tables in Arcmap
1
Adding tracks to gps with QGIS feature attributes as name
3
How to make a line shapefile converted from a gpx track file display over basemaps such as OpenStreetMap?
4
Calculating distance travelled along track in QGIS?
0
Merging tracks from multiple GPX files into a single track?
3
Splitting area polygons into line segments in QGIS for using to edit OpenStreetMap
3
How to copy information from Excel into QGIS Attribute-Table?
1
Add track points in layer
1
Polygons out of a shapefile in QGIS