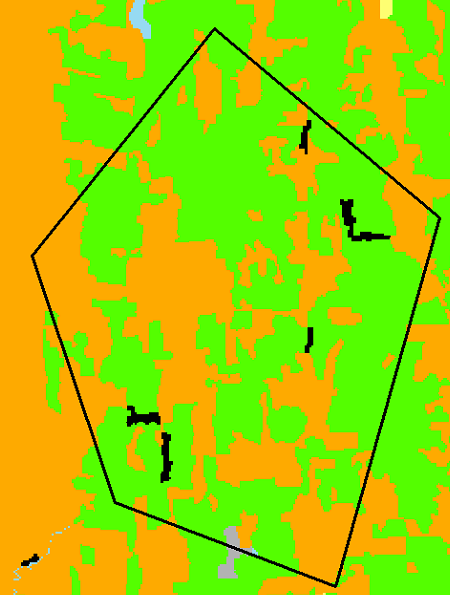 If I understand your specified model correctly, a separate covariate for each landcover type proportion. Yes, the spatial data structure will need to be addressed. You will need to create a separate raster for each landcover type that represents proportion of each given type at the appropriate scale. Depending on how your independent variables were derived, this could take the form of a focal (NxN window or radius) or a zonal function (proportion within each discrete trapping unit).

I am going to mostly ignore any issues with model specification and aim you towards the answer. Although, I do encourage you to really think about your model structure and dig into fit before drawing inference or conclusion around a spatial estimate. Keep in mind that your independent variables are being drawn from the same process and, as such, are not entirely independent. This would be a case where something like AIC would really fail. I am also assuming that your random effect are the trapping units. Although, if you are controlling for the effect it would be a fixed effect. This is also most definitely a Modifiable Areal Unit Problem (MAUP) issue and you should dig into the literature to understand how this has effected your analysis. In your case, the most relevant literature will be in relation to analysis of game units (hunting zones).

Just keep in mind that your rasters need to represent your covariates. So, if your raster is nominal and not proportion of landcover types, then you will need to calculate a raster that represents the percents at the scale the model was constructed. If you just pulled the values of x from the raster than this is taken care of. Also, if your model was multivariate then your rasters need to share common number of rows, columns, origin coordinates and cell size. You would then read the data in as a raster stack or brick. I have a tutorial for implementing a random forests model using spatial data on my Quantitative Spatial Ecology website. This tutorial has example data and provides usage of the predict function for making a spatial estimate.

Not the answer you're looking for? Browse other questions tagged raster r or ask your own question.