I have an attributetable. Spread all over it are numbers like -99999997. I want to replace them by zero (0). There a many columns in which there are such numbers. I have used the expression (an example with one column P-Ant_ARU)

for every feature in the column but I wonder if there is a faster way to use in the field calculator to get rid of all the -99999997 in one or perhaps two steps, because there are a lot of columns :-)

I have also tried toint(0) but that doesn't work because you have to choose a field, and I want a value to be changed. The same problem occurs with the plugin QuickMultiAttributeEdit.

So how can I select all those numbers in the whole table and make them zero. 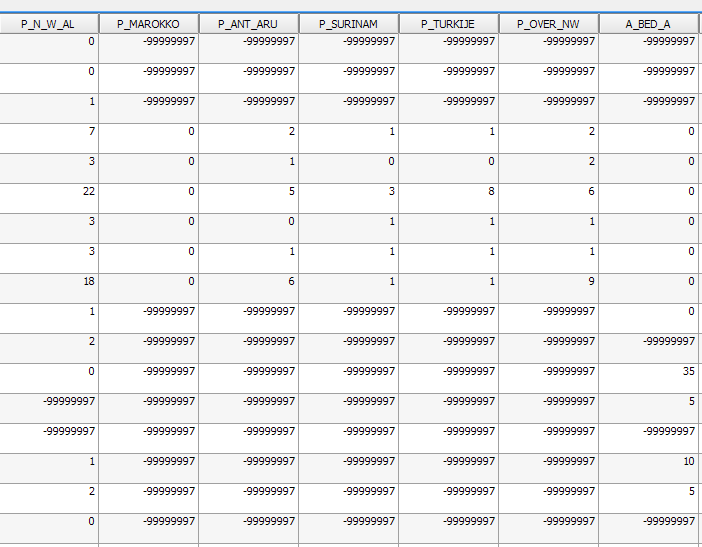 Below are a couple of methods you could use in the Python Console which replaces all values in the Attribute Table of -99999997 with 0. As they are within a function, there shouldn't be anything printed in the console (incase this somehow freezes QGIS). After only limited testing, I found that changing attributes on a column by column basis was a bit faster.

Make an attribute selection in the attribute table e.g.

Then use the field calculator, check Selected features only and the existing field and assign the value.

Open the .dbf file of your shapefile with Excel, LibreOffice Calc or something equivalent. Then, a simple "Search and Replace" should do the job.

Watch out the encoding format when opening and saving the .dbf file, though.

EDIT: Important note (following iant's comment): make a backup copy of your shapefile before manually editing the .dbf file, since this operation could break your shapefile.

After trying to use the Python script which didnt work I went to the next solution mentioned above: open the .dbf in Open Office Calc and with search/ replace. It was a matter of seconds when the results were ready. No problem at all with the shapefile, so that's what I will use. My first fears I think of using an external program to do the job where based on the use of Excel , Calc did the thing for me. For smaller amounts of data in one column I will use the _case when "P_ANT_ARU" is -99999997 then '0' else "P_ANT_ARU" end_ thing. Learned about Python though...

Not the answer you're looking for? Browse other questions tagged qgis attribute-table or ask your own question.

2
Arcmap record value is not displaying entirely
3
Search for textbits in QGIS
1
Merge 2 columns with numbers and NULL cells (QGIS)
3
Setting all values in column to be same using QGIS?
15
Sort attribute table by hidden column in Print Composer
2
Select features that share the same value in a certain column but also have different values in a different column
2
QGIS - auto fill values in one column which share the same value in a different column
1
QGIS select values (strings) without any number