Trouble "extracting by mask" with a DEM layer and a shapefile?

I'm using ArcMap 10.2 and I'm currently trying to clip a county-wide DEM layer (.lyr file) down to a smaller area using a shapefile. The data frame coordinates system is set to US Feet which is what I need. The DEM's coordinate system is in meters and I cannot change that. The shapefile I'm using to clip the DEM I have tried both setting to Meter and to US Feet. I'm using the Extract by Mask tool in the Spatial Analyst > Extraction toolbox. Each time I receive the same error message: Output Raster is listed as "empty" (I do have a workspace set up locally) and the error codes I receive are: 010429, 010213, and 010067. I've looked these up but I know I've gotten this process to work before, I think it's more a coordinate system problem than anything.

Here is the error message I've received each time after trying to extract: 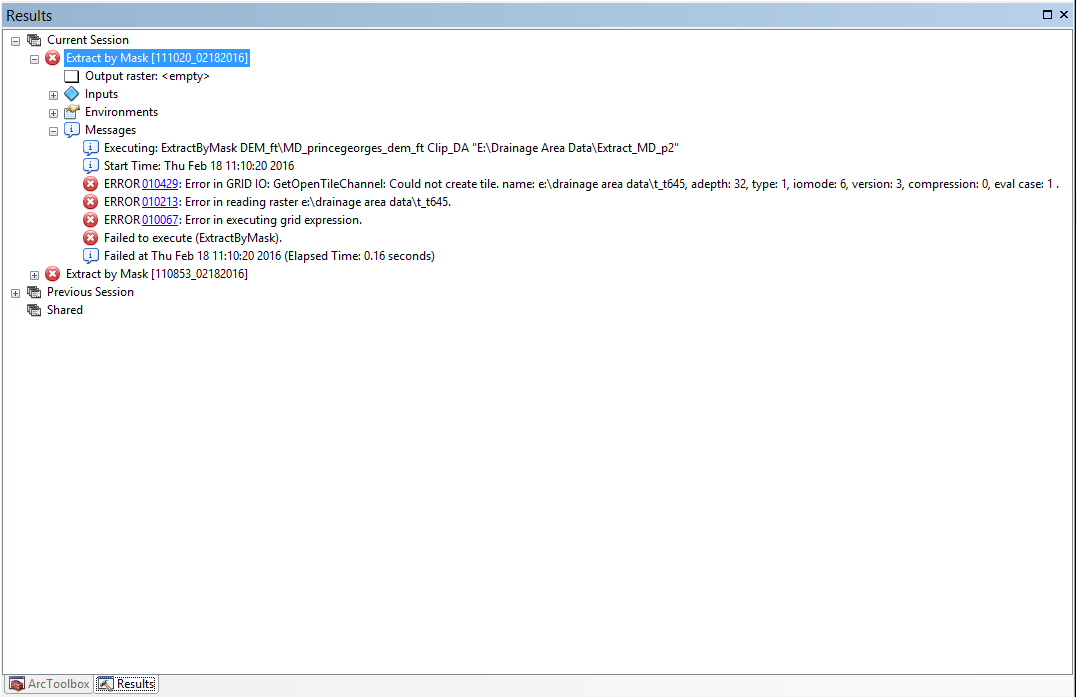 I've found and downloaded a raster/DEM that is in US Feet. I've set the data frame to US Feet, and I've made sure the shapefile to mask is set in US Feet. In the "Extract by Mask" tool window, I went into Environemnts and set the Output Coordinates to match the DEM and the Raster Analysis Cell size to match the DEM. The workspace is local and I've tried decreasing the size of the shapefile I'm using to extract (incase it was just too big). I'm still getting the same three errors. From what I can understand, the first error (010429) seems to indicate that arcmap can't read the DEM layer correctly? It doesn't recognize it somehow? I've downloaded and used DEM's from three different providers so I don't think it's a sourcing issue.

I've had raster tools fail while working in an MXD, but work just fine using the same steps in a new blank MXD or in Catalog. Always worth a shot to try out if you're stumped.

This can be an issue when you have a project-on-the-fly situation, which cause resampling into your process.

You might want to try working on the environment Output Coordinate System. Try to set input the same information as the raster data your are filling.

Here is the ESRI error code help page to use as reference.

Not the answer you're looking for? Browse other questions tagged arcgis-desktop raster dem extract-by-mask error-010429 or ask your own question.

1
Extracting *.tif agricultural area from shapefile?
0
How to handle temp files created during Extract by Mask (Spatial Analyst)?
3
Why do multiple raster processing tools fail with this DEM?
0
Extracting mean elevation values from DEM based on multi-polygon shapefile?
1
Using ModelBuilder to create smaller individual DEMs from a large DEM using multiple polygon?
0
Extracting raster by mask outputs raster with extent beyond the mask layer's in QGIS
1
Extract by Mask tool not clipping to mask extent?
0
Clip bathymetry raster file from vector mask layer its not working in QGIS 3.4.3