What is wrong with this Proj4 transformation?

I'm implementing support for WMS maps in my company's software. Servers return a list of projections their maps are available in, but our software only displays data in WGS84 (lat/lon or UTM), and not all servers return the "CRS:84" or "EPSG:4326" CRSes. As a result I need to transform / reproject the data. Some servers return quite unusual ones, and I'm having trouble with one of these: EPSG:3112 (GDA94 / Geoscience Australia Lambert) used by Geoscience Australia's WMS server. 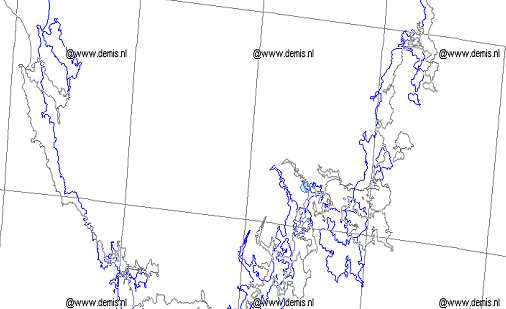 This image is a portion of the Australian island of Tasmania. The grey coastline is from Demis, in WGS:84 projection. The blue outline and grey graticule is from Geoscience Australia, in EPSG:3112, but (theoretically) reprojected through Proj4 to match the grey coastline. As you can see it's quite inaccurate, to the tune of 50-100 kilometres. If this display were drawing WGS-84 graticules, they would be perfectly vertical and horizontal. Note also that the island is stretched, i.e. it's more than a rotation. This looks to me as though the reprojection is not working at all.

Round-tripping an individual point from WGS-84 through EPSG:3112 and back yields the original point:

All conversions are done using pj_transform.

I don't know enough about map projections or Proj4 to know where to go next, although I have been learning a lot over the past few days, and I'd really appreciate advice from someone who knows a lot more about this library.

Some ideas I've had are:

Perhaps a better formulation of this question is:

Thanks for any help!

I originally posted this question on Stack Overflow, but I've re-posted it here. I think it's more a GIS question than a programming question.

I'm not sure if I missed something about your explanation, but normally is not enough to transform only the corners of the bounding box. That only makes match the corners of the image - and not always -, but does not accounts for inner points. You should reproject every pixel in the image to get a perfect match. ¿Maybe using gdalwarp? http://www.gdal.org/gdalwarp.html Another way would be to use a WMS server, for instance Geoserver, as a proxy WMS server to add support for CRS:84 or EPSG:4326 to the services that require it, which is usually known as cascading WMS: http://docs.geoserver.org/latest/en/user/data/wms.html Hope this helps.

Not the answer you're looking for? Browse other questions tagged web-mapping coordinate-system maps proj or ask your own question.

3
Projecting shp from GK3 to UTM32 with BeTA2007
12
Huge differences between results for 7-param datum transform
2
On the fly transformation From WGS84 to NAD27 with proj4 code
4
How do I make this into a working CRS in ArcGIS?
5
QGIS doesn't create the correct projections when creating new shp files
1
Difference between ETRS89 / ETRS-TM32 and ETRS89 / UTM zone 32N
3
CRS Projection problems prevent spatial merge in R
1
Numerical Vertex Edit Error: latitude or longitude exceeded limits
3
Selecting CRS with different code in QGIS?
1
Transforming map with "custom" CRS to WGS84?