At present I have a dataset which is broken down by Electoral Divisions (circa 3,500). However, due to issues with some of my variables I need to choose a larger spatial unit - Local Electoral Area (LEA). An LEA is an aggregation of a number of different Electoral Divisions. The issue with the LEA shapefile, is the attribute table does not provide a lot of information of the region.

I originally was going to geocode by Electoral Divisions and than merge them to the LEA shapefile, however, 3,500 is quiet an amount, as well as ED names are quiet common with other areas in the world.

Is there some way to overlay the two shapefiles so my ED's are imbedded within the LEAs. Both shapefiles are working of the same coordinate system, so I imagine this is possible?

The shapefiles you linked to should be resaved using the Save As... option and with another CRS such as:

I tested this and resaved the shapefiles using "NEW_" as a prefix. I then used the Join attributes by location tool: 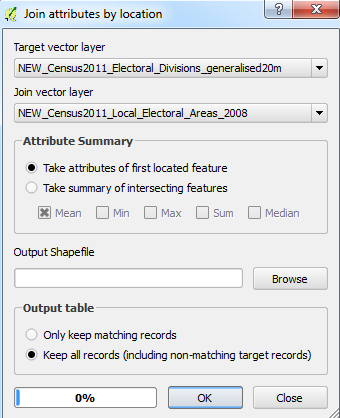 Not the answer you're looking for? Browse other questions tagged qgis shapefile overlay or ask your own question.