I am stuck on how to create multiple features classes from one feature class using a select few fields. I have the following attribute table for a shapefile. 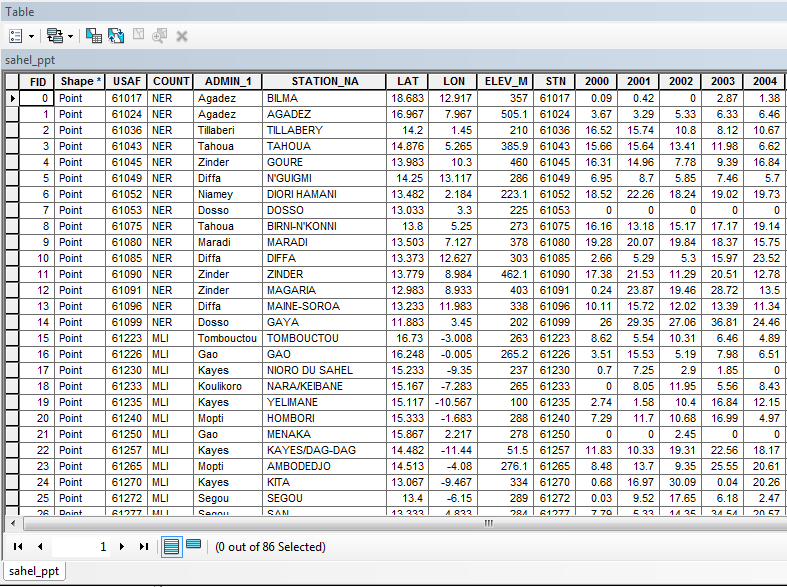 I have been trying to work it out using modelbuilder and a python script (separately) and haven't been close to successful. Here is a script I wrote to test on the first year, but the resultant shapefile is identical to the input

Then tried to append the years on using:

but that failed too! I am not even sure there is a tool to do this. I am new to python scritping for geoprocessing tasks so I am not looking for a really complex method just a simple and straightforward way to do this.

I found the answer here, it requires field mapping:
copy feature class and retain selected fields with arcpy
The documentation pages (for 10.1) are here:
field mappings, which are a collection of...
field map objects

There seem to be some typo issues in that first link's answer (and I didn't find it sufficiently explained), so I got it to work this way:

The alternative answer I've found (which doesn't satisfy my needs because the process takes to long for the datasets I'm working with) is this:
drop fields after copying

If you're looking for something straight-forward the answer probably won't be scripting it. If I understand you correctly, you want to create a separate feature class for each year containing the same fields except for the year. I would just copy your feature class 14 times and then delete the fields you don't want. Name the FCs in whatever dataset you paste them to something like Example2000, Example 2001, etc. Then use the delete fields tool to quickly remove your unwanted to fields. That method should take you less than an hour!

Not the answer you're looking for? Browse other questions tagged arcpy arcgis-10.1 features fields-attributes or ask your own question.

7
Copying feature class and retaining selected fields using ArcPy
3
How do I import specific fields from a shapefile?
1
Select Issues with Converting Feature Class to Shapefile with only certain fields