I have a data set of ~3500 points located across the Pacific Ocean, and am looking to measure the distance from each point to it's nearest coastline to identify the "host" country. I had originally used Plate Caree, but now believe that it doesn't maintain distances accurately? I am hoping not to need a country by country approach, but could someone confirm Plate Caree does / does not maintain accurate (reasonably accurate) distance, or suggest another? Also, I am fully a user of ArcMap, not QGIS, etc. so 'how to' answers outside ESRI aren't helpful in this instance.

It depends on your accuracy needs. Fortunately, since you only have to make a discrete decision--which country is closest?--you only need reasonably good relative accuracy in the directions towards all the coastlines. Although a custom projection could be designed to give very high accuracy in those locations and in those directions, that would require a great amount of work. Instead, you might get by with any common coordinate system that covers the entire Pacific Ocean and achieves reasonably low distortion in directions transverse to the main land masses.

One option worth considering is an azimuthal projection centered near the middle of the ocean, approximately 10 degrees south latitude and 155 degrees west longitude. I chose an azimuthal equidistant projection (based on a spherical datum; use of an ellipsoidal datum will make no appreciable difference). Distances radiating from this central point will be correct. Distances perpendicular to those radial lines will be more and more distorted as you move outwards. However, as long as you're not having to decide between a coastline that lies in a radial bearing and another that lies in the perpendicular direction, the relative errors will remain low.

You may examine the nature of this distortion by considering a map of Tissot indicatrices. In this one I have placed the indices at typical locations around the perimeter (plus one near the center to show the low distortion there). 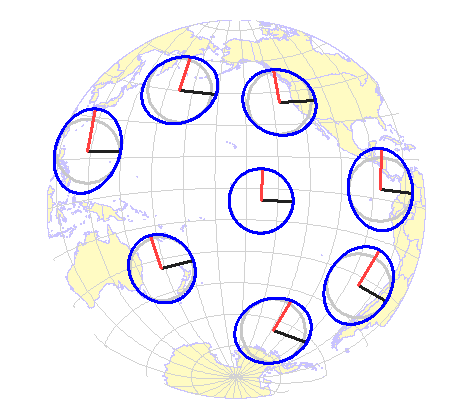 This map is (originally, on the screen) at 1:250,000,000 scale. Land mass outlines and a 30 degree graticule are shown for reference. The Tissot indicatrices show that generally, the bearings toward land are in the directions of low metric distortion. (These directions correspond to the points in each indicatrix where the inner reference circle contacts the outer ellipse whose dimensions indicate the relative distortion at the point of their common center. At the points of contact there is no distortion.)

The principal limitation of this approach would be potential inaccuracies within chains of small islands. It is difficult to see how any standard projection would not be subject to some such limitation, though. If this is an issue, consider a different approach altogether (such as precomputing a 3D Voronoi tessellation).

Not the answer you're looking for? Browse other questions tagged arcgis-desktop coordinate-system distance accuracy or ask your own question.