I have a national dataset of address points (37 million) and a polygon dataset of flood outlines (2 million) of type MultiPolygonZ, some of the polygons are very complex, max ST_NPoints is around 200,000. I am trying to identify using PostGIS (2.18) which address points are in a flood polygon and write these to a new table with address id and flood risk details. I have tried from an address perspective (ST_Within) but then swapped this starting from the flood area perspective (ST_Contains), rationale being that there are large areas with no flood risk at all. Both datasets have been reprojected to 4326 and both tables have a spatial index. My query below has been running for 3 days now and shows no signs of finishing any time soon!

Is there a more optimal way to run this? Also, for long running queries of this type what is the best way of monitoring progress other than looking at resource utilisation and pg_stat_activity?

My original query finished OK albeit for 3 days and I got sidetracked with other work so I never got to dedicate the time to trying out the solution. However I have just re-visited this and working through the recommendations, so far so good. I have used the following:

I am ready to run my script now, will iterate over the rows and columns populating results into a new table until I have covered the whole country. But just checked my flood data and some of the very largest polygons appear to have been lost in translation! This is my query: 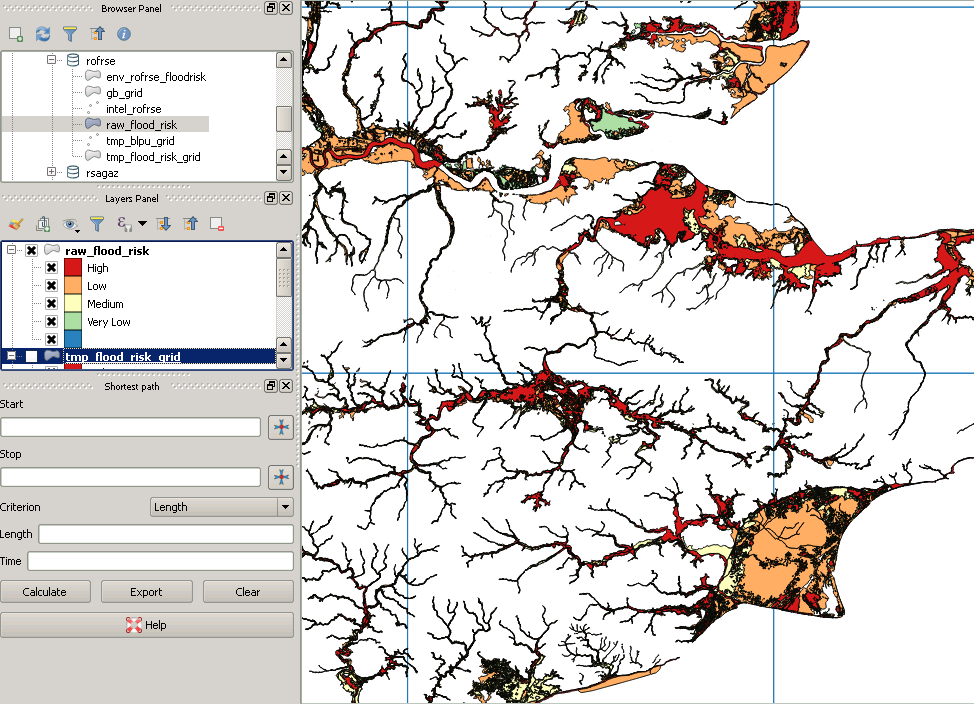 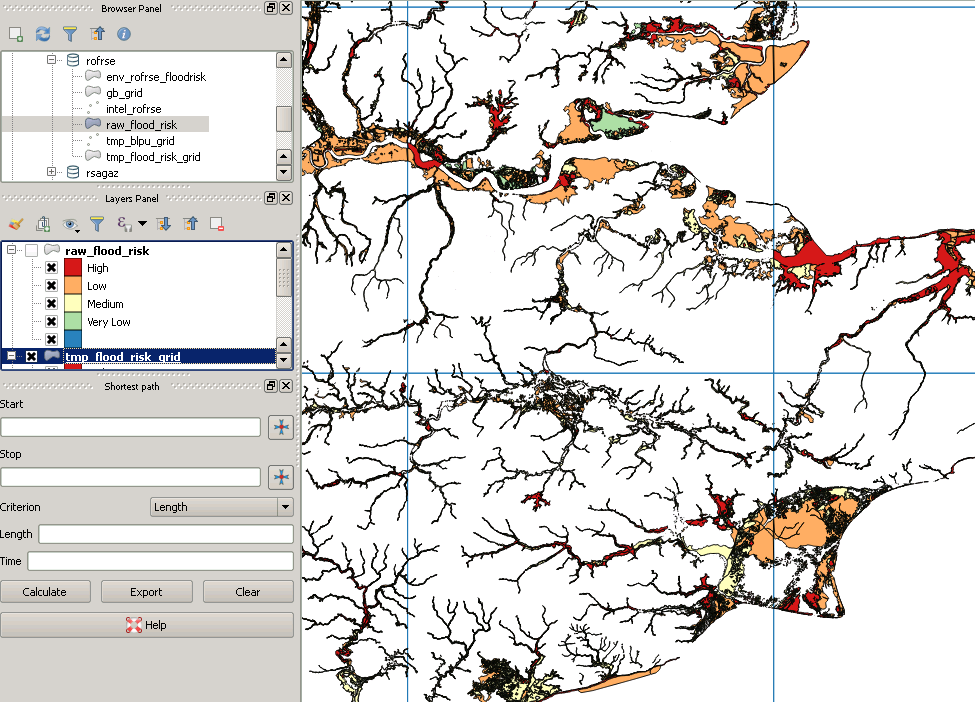 This is an example of a "missing" polygon: 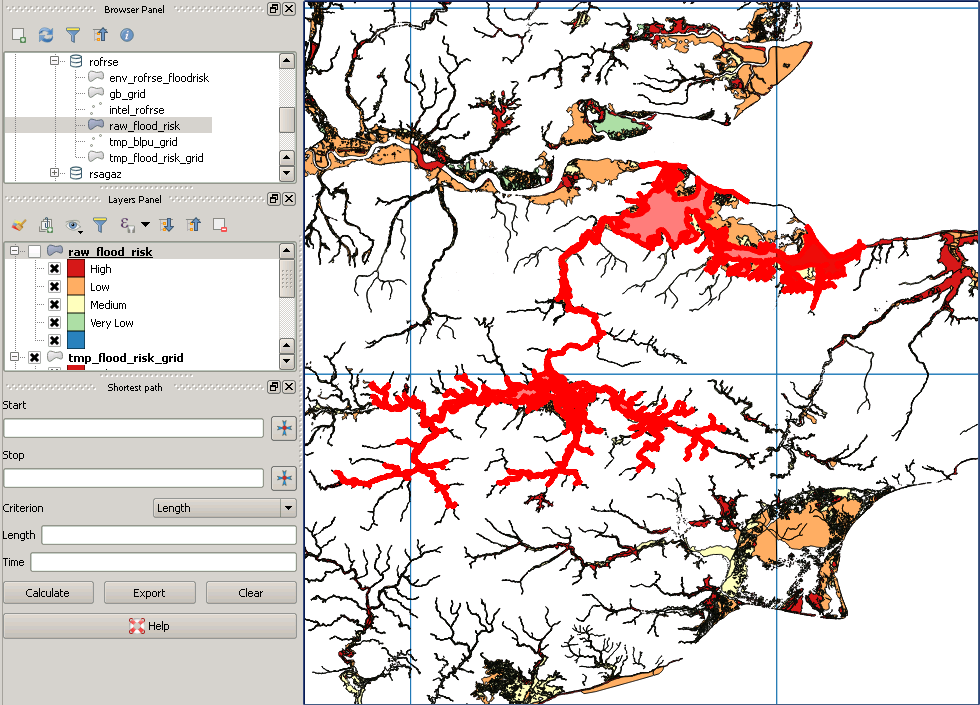 To answer your last question first, see this post about the desirability of being able to monitor the progress of queries. The problem is difficult and would be compounded in a spatial query, as knowing that 99% of the addresses had already been scanned for containment in a flood polygon, which you could get from the loop counter in the underlying table scan implementation, would not necessarily help if the final 1% of addresses happen to intersect a flood polygon with the most points, while the previous 99% intersect some tiny area. This is one of the reasons why EXPLAIN can sometimes be unhelpful with spatial, as it gives an indication of the rows that will be scanned, but, for obvious reasons, does not take into account the complexity of the polygons (and hence a large proportion of the run time) of any intersects/intersection type queries.

A second problem is that if you look at something like

you will see something like, after missing out lots of details:

The final condition, &&, means do a bounding box check, before doing any more accurate intersection of the actual geometries. This is obviously sensible and at the core of how R-Trees work. However, and I have also worked on UK flood data in the past, so am familiar with the structure of the data, if the (Multi)Polygons are very extensive -- this problem is particularly acute if a river runs at, say, 45 degrees -- you get huge bounding boxes, which might force huge numbers of potential intersections to be checked on very complex polygons.

The only solution I have been able to come up with for the "my query has been running for 3 days and I don't know if we are at 1% or 99%" problem is to use a kind of divide and conquer for dummies approach, by which I mean, break your area into smaller chunks, and run those separately, either in a loop in plpgsql or explicitly in the console. This has the advantage of cutting complex polygons into parts, which means subsequent point in polygon checks are working on smaller polygons and the polygons' bounding boxes are much smaller.

I have managed to run queries in a day by breaking the UK into 50km by 50km blocks, after killing a query that had been running for over a week on the whole UK. As an aside, I hope your query above is CREATE TABLE or UPDATE and not just a SELECT. When you are updating one table, addresses, based on being in a flood polygon, you will have to scan the whole table being updated, addresses anyway, so actually having a spatial index on it is of no help at all.

EDIT: On the basis that an image is worth a thousand words, here is an image of some UK flood data. There is one very large multipolygon, the bounding box of which covers that whole area, so it is easy to see how, for example, by first intersecting the flood polygon with the red grid, the square in the southwest corner would suddenly only be tested against a tiny subset of the polygon. 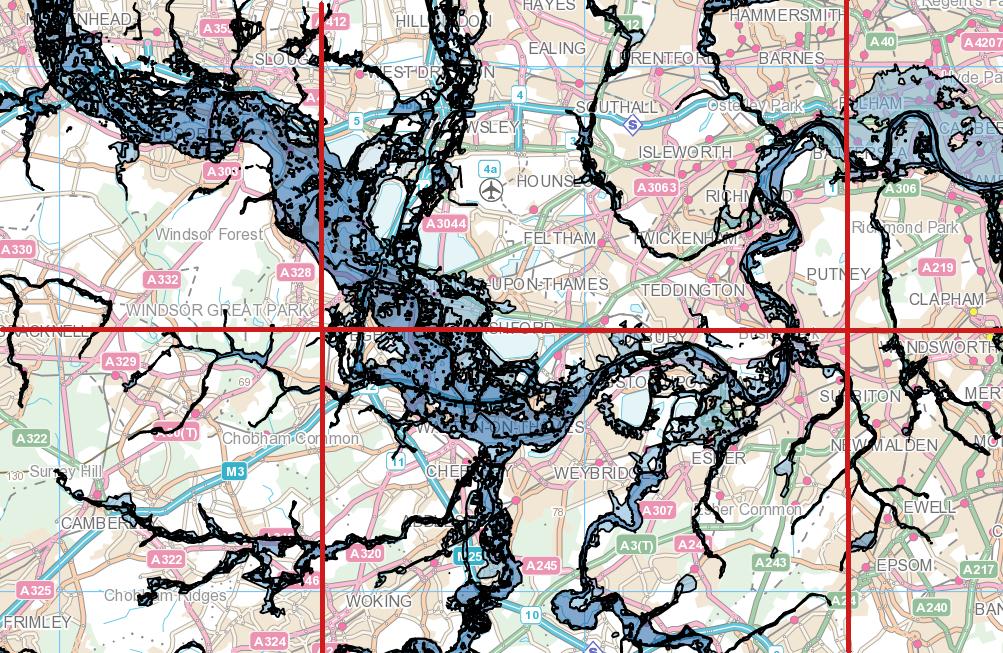 Not the answer you're looking for? Browse other questions tagged postgis point-in-polygon or ask your own question.

7
What would be 'normal' processing time for a large postgis query
6
Is the PostGIS st_intersection function viable for very large data-sets?
1
postgis st_intersects returns false even though locating the address on google maps shows that it lies inside polygon boundary
1
PostGIS speed up query
4
Query takes very long time
1
PostGIS - Optimize Point Outside polygon query for 4 million points
0
ST_Intersects performance issue and not using spatial index with simple update query
2
How can I optimize this query PostGIS