I need to compare the value "Name" in "table1.shp" to the value "STREET" in "referenceTable"

If the values are the same then put the "AKA" value into the "Result" in "table1.shp" 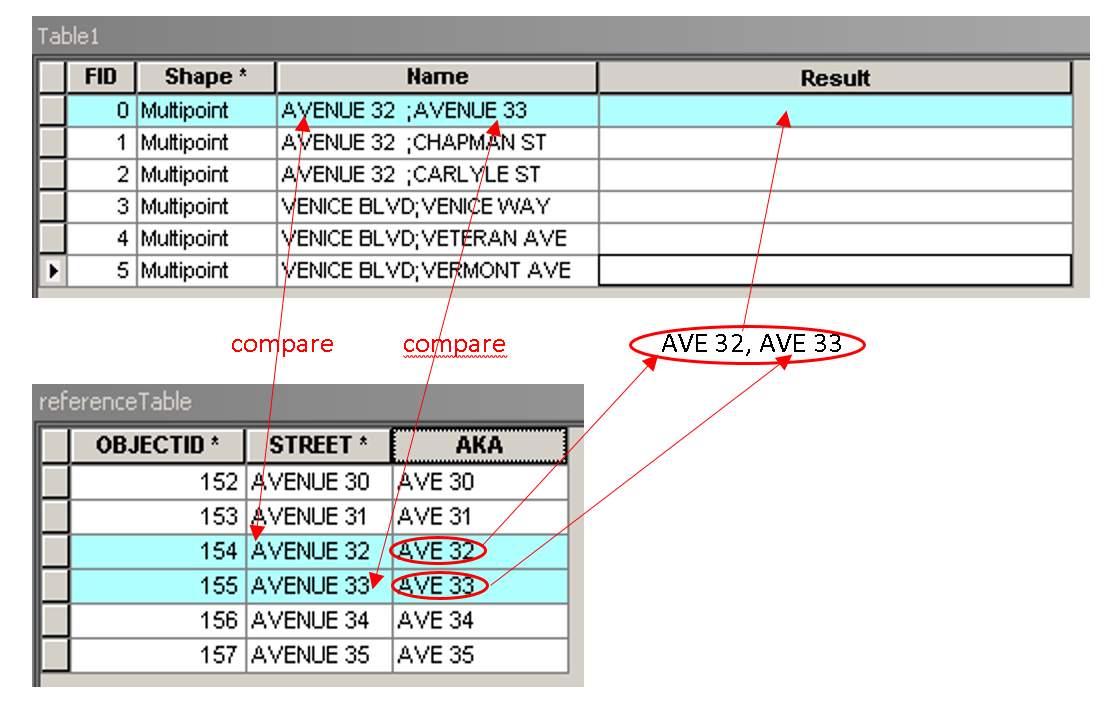 Here is my code. I got stuck on accessing the elements from the array

Below was my old post. Sorry for the confusion.

I have a shapefile named "table1.shp".

So far, I'm able to create a list but not too sure how to get to value "AVENUE 33" or "CHAPMAN ST"

As said in the comments, a few cursors should help. Also, you changed your question a bit, so perhaps this approach isn't what you were looking for.

The following uses two cursors: one to go through Table1 to do the updates, and one to search the reference table for the AKA given the streets.

Unfortunately, this is untested code, but should get you in the right direction.

The uCur will return just the Name and Result fields here. For each row, we split the Name on the semicolon, then go through each street split out to look up the AKA in the reference table. Once we find the AKA, we add to a list since we could have multiple streets. Once we're done, we join all the AKA values together with a comma. Finally, we use the update cursor to update the Result field with our newly joined string.

1) The search cursor can be slow if you're updating thousands of rows. If the reference table isn't too large, it might be very beneficial to stuff all the AKA results in a dictionary. Then we can just use the update cursor to look-up the values in the dictionary, which is very quick. This is at the cost of putting the reference table in memory.

Personally, I'd try this.

2) Using a dictionary brings up an excellent consideration: your reference table better have only unique values in the Street column. If there are two values for Main St, the dictionary will not be happy.

3) Be very careful with your indenting. Your sample code as printed here is problematic; I hope that is just a copy/paste issue to GIS.SE.

4) Again, this is untested code, so there may be some issues here. Test, test, test.

Not the answer you're looking for? Browse other questions tagged arcpy cursor or ask your own question.