Trying to gdalinfo that file:

So I assume these MODIS HDFs are using the HDF4 standard, which isn't listed in my formats list, and that's why GDAL has no idea what to do with them.

My QGIS Essen 2.14.0 says it's running against GDAL 1.11.4, which can't read them either; I add the HDF and it asks me to pick a raster layer in the file, but when I select one nothing appears and the error log says "Unable to load."

I saw this question about the same issue on Windows, but apparently HDF4 support is an optional flag when you install GDAL? Anyone else have this issue with MODIS HDFs on OSX? Is there a way to get HDF4 support into my GDAL builds? I installed both GDAL and QGIS using KyngChaos's installers.

EDIT: QGIS would not load these HDF4 files because their directory path had quote marks " in it. Moving them to a directory without quotes fixed this.

I think you have a big problem of paths. The version of QGIS of KynChaos installs GDAL as a Framework in /Library/Frameworks/GDAL.framework

Therefore, the format is supported and

And in QGIS, I have no problem to open a layer. 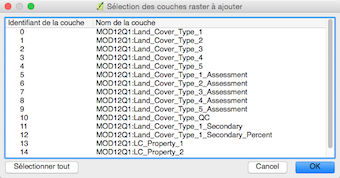 But the layer itself is problematic because when you use it with the Modis Reprojection Tool (conversion to Geotiff) the images are only black and white (2 colors, 0 and 255) 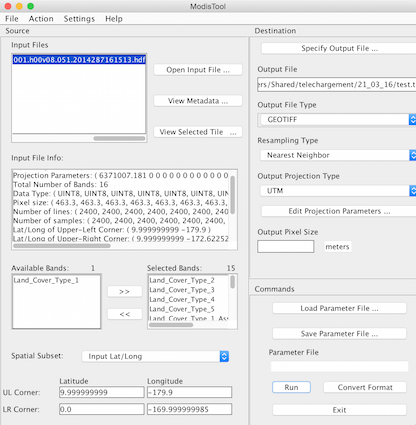 I ran into this problem with multiple versions of GDAL installed.

I solved it by specifying the full path to my homebrew installed GDAL 1.11.5

Not the answer you're looking for? Browse other questions tagged qgis gdal modis hdf or ask your own question.