How can I make a polyline wrap around the world?

I am using leaflet maps to create a representation of a round-the-world challenge. I would like to add a polyline which heads east from tokyo and then appears west of south america on the map - but instead I get a line which crosses the map in the opposite direction (see yellow line). 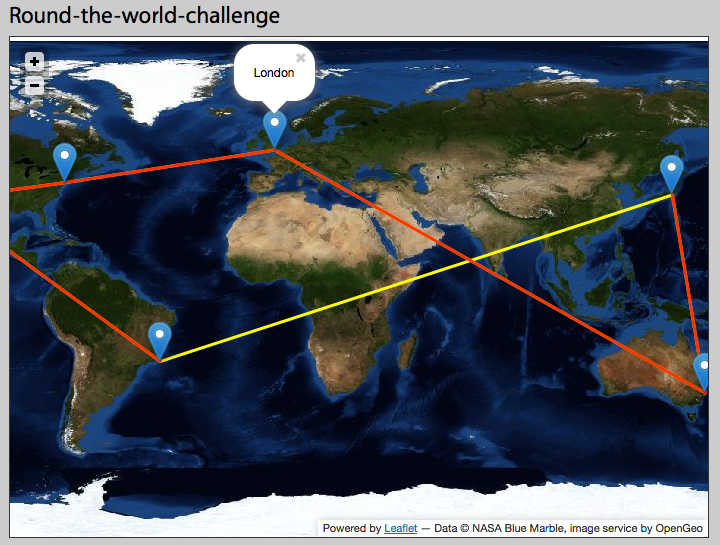 I think this is probably related to datelines and /or coordinate systems but am a bit sketchy on the detail. Can anyone explain the theory behind what I need to do to get this to work? I am using the bluemarble projection from Nasa:

You need to break the polyline at the +-180 degree meridian. This requires finding the latitude at which the polyline crosses that meridian. Your GIS probably has methods to do the breaking. If not, a simple solution can be derived from code shown in a related thread. Here are some details.

The key is finding the latitude of the break point with reasonable accuracy. This is most easily done with a spherical earth model: the error (compared to a more accurate ellipsoidal model) will be too small to notice.

and a similar expression giving (x1, y1, z1) for point 1. Solve the equation

The coordinates of the intersection are therefore

In exceptional cases, one or both of point 0 and point 1 may be on the +-180 meridian. Following this procedure will cause you to place a zero-length segment on one of the polyline pieces you create. If this might cause a problem with the GIS, test for this condition.

Note that a polyline can cross this meridian more than once. Therefore, after finding the first break and breaking the polyline into two parts, you need to process the second part in the same way.

For a related discussion, perhaps this ticket is interesting:

Not the answer you're looking for? Browse other questions tagged coordinate-system polyline-creation leaflet or ask your own question.

1
Remove/hide the long connecting line in plotting GeoJSON linestring using Leaflet
8
How to find a point half way between two other points?
10
Polygons across international dateline [-180..+180 longitude]

12
1km circles around lat-long-points in many places in world
1
How can I make the UTMs of different datasets uniform?
2
How can I make sure my layers are in the same CRS projection?
5
Make tool tip wrap text
3
Make Leaflet polyline bold by hover?
0
Calculating coordinates for halfway around world from given location