Add and Updates not working for attributes in ArcGIS Runtime for .Net

I've done the CreateNew() as well as creating a new GeodatabaseFeature as described in the documents here:

I've tried Adding and Updating features. The "a_commodity_group" attribute is exactly how I see it spelled in the rest endpoint and is a Text/varchar field in the database underneath

I'm seeing none of my attributes come through. (example, the "fake" value that I've put in here)

As you can see, the request is totally wrong in that it doesn't have any other attributes going in.

Manually adding features through "ApplyEdits" in the REST endpoint worked. 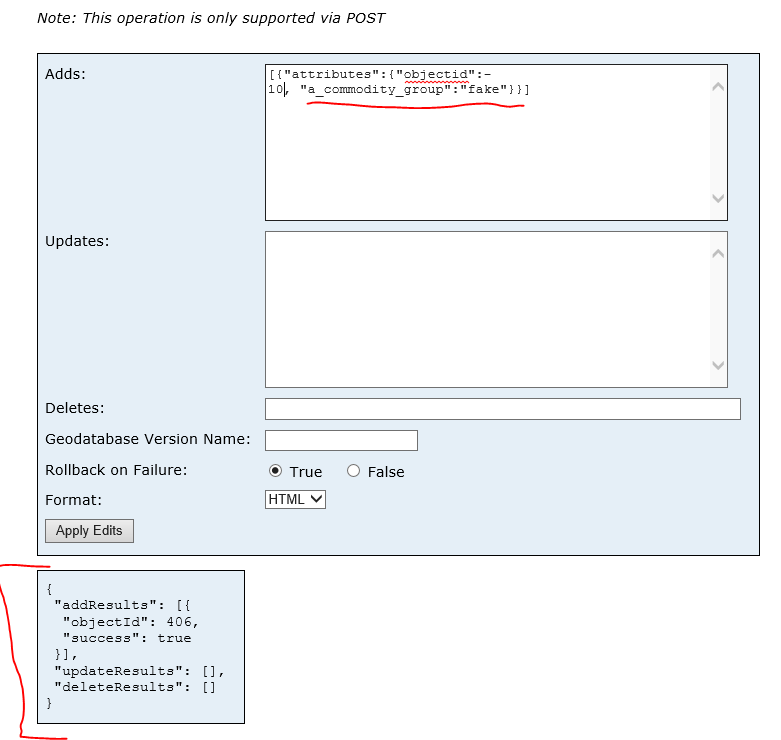 I don't see any known issues with this in the ArcGIS Runtime. I'm considering writing my own REST api as the workaround right now since I can't get this to work.

It's quite possible that I'm making a totally wrong assumption in how I'm using the API, but I haven't seen many examples for adding features to a connected service. I'll double check the full .net runtime sdk pdf document and see if I'm doing anything wrong, too.

Update: I also noticed that DeleteAsync doesn't work unless I layer.QueryAsync the features first. Probably has something to do with some local cache in the ServiceFeatureTable layer object. Before I was querying objectids using the ExecuteObjectIdsQueryAsync() method on a QueryTask object.

I had this same problem adding features, the geometry went in but no attributes. I fixed it for my code by adding the OutFields to the ServiceFeatureTable in the xaml file:

Works fine now. I guess the example at https://developers.arcgis.com/net/desktop/guide/edit-features.htm#ESRI_SECTION1_2A4C0222216A448C9CBAFCD0F75A21F6 doesn't show the xaml.